PCC’s goal is to infer which rate control actions improve performance based on live empirical evidence, avoiding TCP’s preconceptions about the network.

We discuss the limitations of traditional TCP and present the advantages of online learning with PCC.

Real-world experiments reveal that, in many cases, the performance of specially-engineered TCP variants is far from optimal [PDF 690KB] even in the environments for which these were designed.

We argue this unfortunate state of affairs is an inherent consequence of TCP’s architecture and, specifically, of hardwiring predefined packet-level events to predefined control responses. Consider, for example, the behaviour of a TCP connection upon experiencing packet loss. Figure 1 depicts four potential reasons for why packet loss might have happened and the four corresponding ‘appropriate’ control reactions. 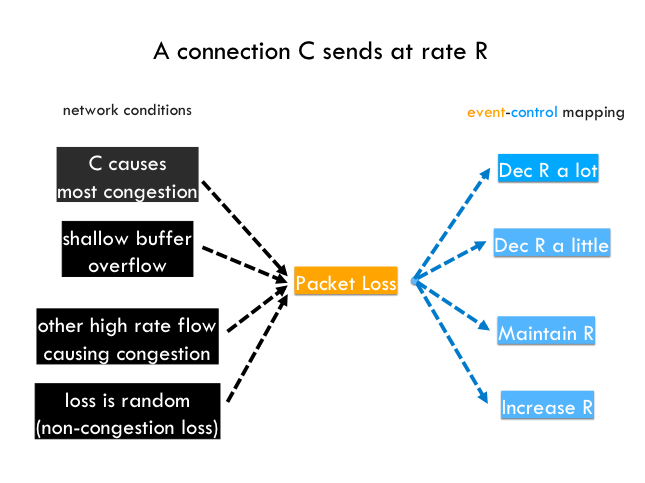 While variants of TCP might react differently to packet loss, any TCP-sender is bound to react to all four scenarios in precisely the same manner (for example, half the congestion window), resulting in bad performance when its hardwired reaction does not match the network conditions.

PCC rises from where TCP fails by associating a control action (change of sending rate) directly with its effect on real performance.

Under PCC, time is divided into consecutive intervals, called Monitor Intervals (MIs), each devoted to testing the implications for the performance of sending at a certain rate. Specifically, when a PCC sender tests rate ‘r’, it sends at this rate for ‘sufficiently long’ (say, an RTT) to receive Selective Acknowledgements (SACKs), and aggregates these into meaningful performance metrics (for example, throughput, loss rate, and average latency). These are then combined into a numerical value ‘u’ via a ‘utility function’ that captures objectives such as high throughput and low loss rate.

By comparing utility values resulting from sending at different rates, the PCC sender learns how to adjust its rate to track the empirically optimal sending rate. To understand how this is accomplished, let’s revisit Figure 1.

Thus, a PCC sender will reach different decisions in these two scenarios (decreasing and increasing the rate, respectively), illustrating PCC’s ability to learn the ‘right’ control response in an online manner.

In our research, we evaluated a PCC implementation in QUIC in large-scale real-world networks.

With no tweak of its control algorithm, PCC outperformed specially-engineered TCP variants by factors of 5 to 10x and beyond. We are currently developing a PCC Linux kernel module.

See our PCCproject GitHub space for an implementation of PCC in QUIC.

We also experimented with PCC and Google’s BBR in controlled environments, real residential Internet scenarios, and with video-streaming applications. We found that PCC shows improved performance in rapidly changing conditions, and faster and more stable convergence, which ultimately produces a lower video buffering time (watch a video stream comparison between TCP, UDP, and PCC below).

Beyond improved performance, PCC is able to achieve fairness, stability, and friendliness towards TCP.

Check out our papers, PCC: Re-architecting Congestion Control for Consistent High Performance [PDF 1.5 MB] and PCC Vivace: Online-Learning Congestion Control [PDF 800 KB], and watch our presentation at IETF 101 (below) to learn more about our research, or ask us questions below in the comments.

Michael Schapira is an Associate Professor at the School of Computer Science and Engineering, Hebrew University of Jerusalem.