In just over a week, APNIC 44 will be held in Taichung, Taiwan. To give you a brief overview of the local history, challenges, and opportunities that the Internet provides to our host economy, we’re telling the stories of some of its local champions.

Taiwan has long been a technological leader. Its manufacturing feats are well known, with 70% of the world’s integrated circuits being manufactured in Taiwan. Incredibly, Taiwan’s five largest organizations are electronic, computing and semiconductor manufacturers, all of which feature in the Fortune Global 500.

Less known, though, is how Taiwan has been a networking and Internet pioneer: it was one of the first economies in Asia to develop an academic and research network (BITNET, which later became TANet), configure one of the first international network connections with the USA, and develop one of the largest wide-scale free WiFi services in the world.

A combination of a highly educated and productive workforce that’s made them one of the ‘Asian Tiger’ economies, growth of mobile broadband, and the recent expansion and upgrades of its wireless and fixed-line broadband services, has resulted in impressive Internet speed and penetration. 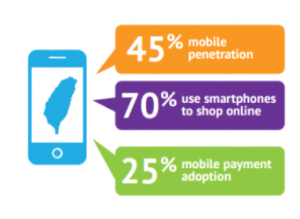 With a USD 37 billion e-commerce market that is expanding rapidly each year, and more access to interactive rich content, many of Taiwan’s next generation of workers are looking to become digital innovators like YouTube co-founder Steven Chen and e-commerce pioneer Steven Ho.

Importantly, the TNDC are implementing key initiatives to assist with nurturing this digital-native generation as well as support efforts to modernize its manufacturing sector. These include establishing start-up hubs, science and technology parks inspired by Silicon Valley, and international commercialization services.

As we’ll see during this series of interviews with some of Taiwan’s Internet leaders, these efforts combined with Taiwan’s technological affinity, are powering the economy into the new age of artificial intelligence, virtual reality, the Internet of Things, and smart cities.

Fu-Kuei Chung – Staying ahead of the Internet pack in Taiwan

Kuo-Wei Wu – Policy and regulation as important as technological feats