Passing through Taoyuan International Airport in Taipei, the first thing many travellers do is scan the arrivals lounge for local mobile operators offering the cheapest data deals to satisfy their Internet fix during their visit.

As in most Asia Pacific economies, mobile is the preferred means for connecting to the Internet in Taiwan — the economy has the highest smartphone penetration in the world — and there is plenty of competition to meet the demand.

Established in 2011, iTaiwan has more than 5,000 hotspots all over the island in public areas including major tourist spots, transportation hubs, cultural establishments, and public offices, allowing users to check e-mails and browse the web.

The concept of free Internet in Taiwan has a long history, dating back to the birth of one of the economy’s original ISPs, HiNet, 17 years before the launch of iTaiwan.

Fu-Kuei Chung is the Chief Audit Executive at Chunghwa Telecom Co. Ltd, Taiwan’s incumbent telecommunication operator and provider of HiNet. In 1993, he helped to establish and build HiNet, which is now Taiwan’s largest ISP.

“The size of the original network was small and very slow compared with today,” remembers Fu-Kuei, who started out as a satellite communications engineer with China Telecom in 1976. “When business services were just beginning, the international bandwidth to the United States was only around 1.5Mbps and we were providing 64kbps fixed and 9.6Kbps dial-up connections.”

Fu-Kuei remembers that the free trial helped considerably with building awareness of the Internet in Taiwan. “Although the number of users declined straight after the free trial ended, we started to see sustained and rapid growth in the following years — by 1999 we passed one million users and by 2002 we passed three million.” 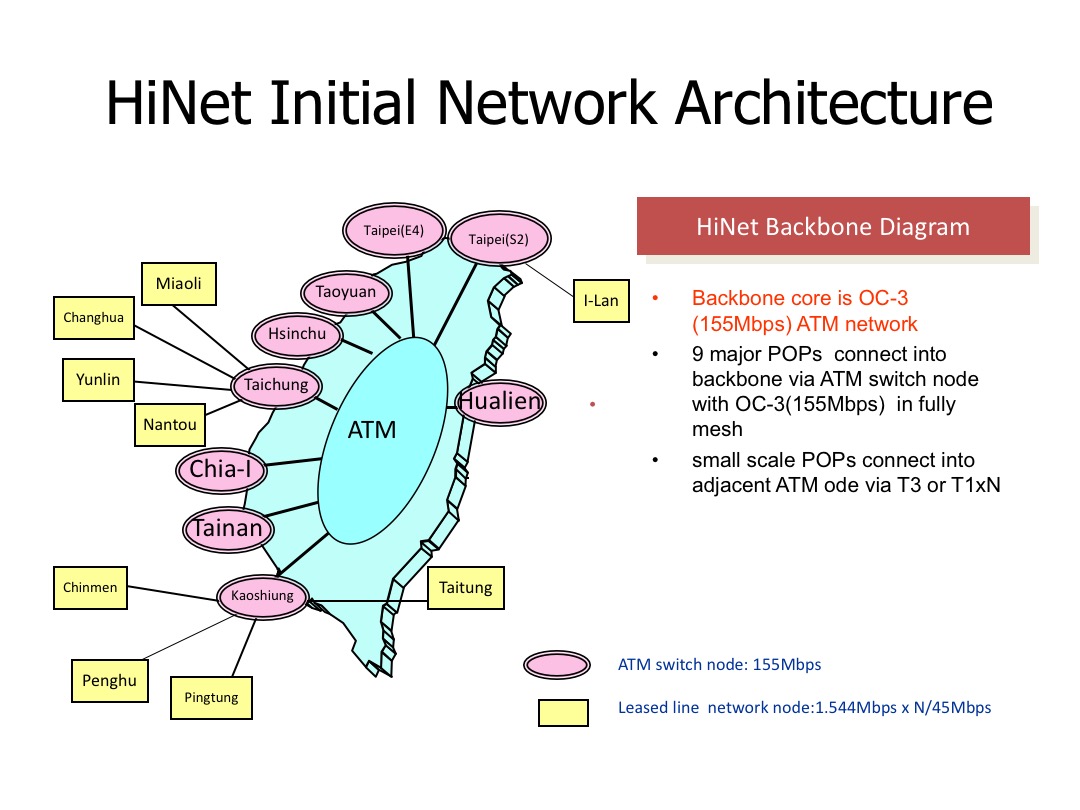 As of June 2017, almost two-thirds of Taiwan’s fixed-line Internet customers are connected to HiNet — a huge achievement, given the growing and ever-competitive fixed-line broadband services available in Taiwan. Fu-Kuei recognises that this statistic has a lot to do with parent company Chunghwa Telecom being the oldest and largest telco, but he is adamant that the quality of service that HiNet prided itself on in its early years, and still does today, has a lot to do with its customer retention.

One recent effort by Chunghwa to continue to add value to HiNet services and accommodate future network requirements, has been the construction and unveiling of a USD 412 million data centre in New Taipei City — Taiwan’s first cloud data centre.

Fu-Kuei says this has been a courageous decision by the telco, which is often criticised for being too traditionally-minded when it comes to telecommunications. “Over the years, we’ve experienced many challenges with developing value-added applications to the network, including portal, email, video, and e-commerce. This has not been an exclusive challenge but one that I believe the rest of Taiwan is facing when it comes to competing with large global cloud service providers like Amazon, Google, and Microsoft.”

Based on the strong demand for space in its new cloud data centre, Fu-Kuei believes that the success of Chunghwa’s new venture is aligned with the company’s networking origins, something he says the company will continue to need to work on if it is to stay ahead of its competitors, particularly those in mobile broadband.

“Yes, we’re proud of being the largest fixed-line broadband provider. But we need to continue to work on improving our network to compete with the growth of mobile broadband, particularly with the introduction of 5G, which will provide high-speed Internet services that will rival fixed,” says Fu-Kuei. “This improvement will continue to come from technology but we also need to look at ways to reduce the cost of construction of the network, and ways that we can provide a more reasonable charging mechanism.

“We also need to think further in the future in terms of how we can prepare our network to accommodate the approaching Internet of Things revolution, including the need for IPv6, as well as municipal networks like iTaiwan. This is where I believe Chunghwa and HiNet can ensure we stay ahead of the pack.”