Like most new technologies, 5G has brought with it a great deal of media hype. Some of this hype is accompanied by a significant distortion of facts and amplification of the actual capabilities of 5G technology. However, one claim that has universal agreement is that 5G will achieve ‘blistering speeds’, or in other words, much higher bandwidth compared to previous generations.

These higher-bandwidth requirements mean that the underlying IP and optical transports that are used to transport the mobile traffic will also need to be upgraded and rearchitected. The changes won’t just stop at higher bandwidth though, as networks will also seek to achieve much lower latency, much higher availability and much higher scalability than that demanded by previous generations of mobile technology.

In this post, I will discuss the nature of the technology changes in 5G from the perspective of IP and optical transport networks.

There are three basic use cases that the 3GPP, the prime body for mobile specifications development, is working towards:

These three use cases require potentially contradictory network capabilities. As such, 5G networks need to be carefully architected to provide an optimal balance between service capabilities and network investment. 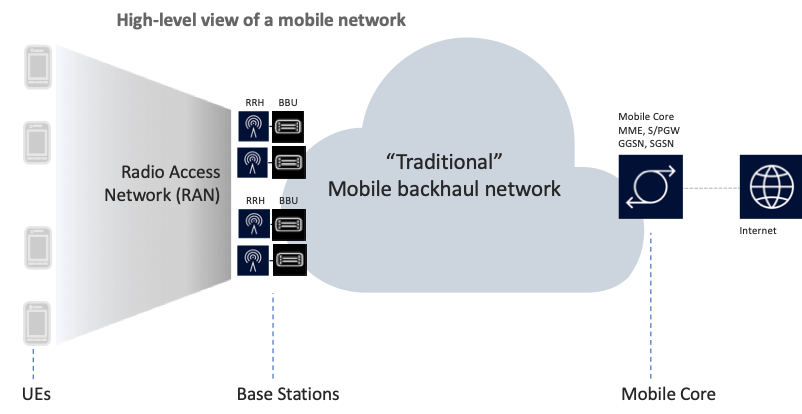 A traditional (pre-5G) mobile transport network has a number of distinct components:

Before considering the impact of 5G technology on IP networks, you must appreciate the key architectural changes over previous generations. These changes can be broadly characterized as either changes in the Radio Access Network (RAN) or the mobile core network, which for 5G is termed the 5G core (5GC).

5G opens up a lot more spectrum bands than have traditionally been used for mobile communications. Most mobile access networks in existence today have been deployed in the sub-3GHz radio spectrum.

The 5G spectrum is being allocated in three primary bands, as illustrated in Figure 3.

The two interesting spectrum bands that are being unlocked for 5G are the cmWave and mmWave ranges. These bands are characterized by higher frequencies and lower wavelengths. These higher frequency bands are attractive as they make available a lot more spectrum than is currently available within the sub-3GHz bands.

They do, however, come with a trade-off: the higher the frequency in use, the shorter the range we can achieve. This is due to the greater attenuation experienced by the higher-frequency RF transmissions.

Multiple-Input, Multiple-Output (MIMO) is a technique where multiple transmitters and receivers can be used at mobile cell sites and on UE to provide improved performance and capacity.

Implementations using up to 4 transmitters and receivers have been commonly deployed in 4G networks. 5G takes this a step further by introducing a much larger number of antennas — more than 16 — to provide the ability to send multiple independent data streams over the same, shared frequency- and time-domain resources within a single mobile cell (spatial multiplexing). The net effect is the multiplication of capacity within each cell site.

There are many ways of implementing the 5G RAN, as a result of an effort to disaggregate the components of the base station.

There are two potential architectures for deploying the RRH and BBU functions.

The first model, which is by far the more popular, is termed Distributed RAN (D-RAN) and deploys both the BBU and RRH functions at each cell site.

In the second model, the BBU function is placed at a more central location, typically called a BBU Hotel. This mode is termed as Centralized RAN and has been deployed by some operators as it allows them to simplify the equipment at the cell site resulting in reduced space and power requirements. In addition, it allows the BBU elements to be shared among multiple cell sites.

For the purpose of understanding 5G RAN deployment models, it is important to express the functions of baseband processing and RF processing in the form of the 3GPP Radio Protocol Stack, as illustrated in Figure 5.

In the same vein as other efforts in the industry, 5G attempts to disaggregate many RAN functions that have previously been vertically integrated. Figure 6 shows how we derive three new groupings of RAN functions based on splitting the functions of baseband processing.

As we see above, the RAN functional elements can be split up into three functional units:

The three functional blocks of the CU, DU and RU can be physically decoupled and located at various tiers of the transport network resulting in different potential architectures (Figure 7).

The choice of RAN architecture impacts the transport network in different ways. It requires low-latency transport between certain elements and different amounts of bandwidth depending on the communicating elements.

The 5G core uses a Service-Based Architecture, which defines the 5G core components as Network Functions (NF) together with an API that can be used to invoke services. In addition, the 5G core decouples the user-plane (or data plane) from the control plane.

A key benefit of this capability is that the control plane can be centralized while the User Plane Function (UPF) can be distributed to various parts of the network to achieve low latency or to offload traffic closer to the actual users.

A key application of the CUPS capability is to allow mobile IP traffic to be broken out at different parts of the network. In Figure 10 , we see an example where:

At a high level, the changes to 5G architecture and capabilities impose the following requirements on IP and optical transport networks:

As we have seen, the 5G network will be disaggregated in both the RAN and core domains.

The RAN domain can be split up into the RU, CU and DU functions. Different requirements will be imposed on the transport network connecting these functions, depending on where an operator chooses to physically locate them.

A similar approach is also being adopted for the mobile core with a clean separation of control-plane and data-plane functions. These functions will also need to be interconnected by a versatile IP network.

Due to the number and types of use cases supported by 5G, traffic patterns in a 5G network will be a lot more dynamic. The underlying transport network will need to allow programmatic control to allow it to react in near-realtime to the changing traffic demands of the mobile network.

For more information on some of these concepts, please refer to:

I ‘m interested to hear your feedback on this post and thoughts on transport for 5G. Please write to me using the form below.

Paresh Khatri is the CTO for the IP and Optical Networks Business Group for Nokia Corporation in APAC.