The South East Asia subregion is home to over 650 million people and covers an area of around 4.5 million square kilometres. It includes a number of economies on the Asian mainland, such as Myanmar, Viet Nam, Lao PDR, Thailand, Cambodia and Malaysia, and extends south to encompass Indonesia, Brunei, Philippines, Timor Leste and the Christmas and Cocos Keeling Islands.

South East Asia is also partially serviced by National Internet Registries (NIRs) in Viet Nam and Indonesia. The charts in this report include delegations to those NIRs.

With a population of almost 270 million people, it stands to reason that Indonesia would hold a significant slice of the delegations pie for all resource types (IPv4, IPv6 and ASNs). What does stand out though, is that Singapore holds 13.5% of allocated ASNs while its population is less than 1% of the sub-region.

As we can see from the Total by Year graph, Singapore, Thailand, Malaysia and the Philippines have both been consistently adding ASNs year upon year since the mid-1990s.

The few spikes you can see in Viet Nam’s delegations are due to the fact that APNIC often delegates ASNs to NIRs in blocks of 100, and the spikes in 2011 and 2016 reflect that.

Looking at the vizAS graphs we can see that the economies with the highest numbers of ASNs in use are also among the most densely peered (Indonesia, 1.35 visible adjacencies per ASN, Thailand 1.38). The most densely peered in the region, however, is Myanmar (below), which has just 69 ASNs but 96 visible adjacencies, indicating the emergence of an active peering community in the economy. 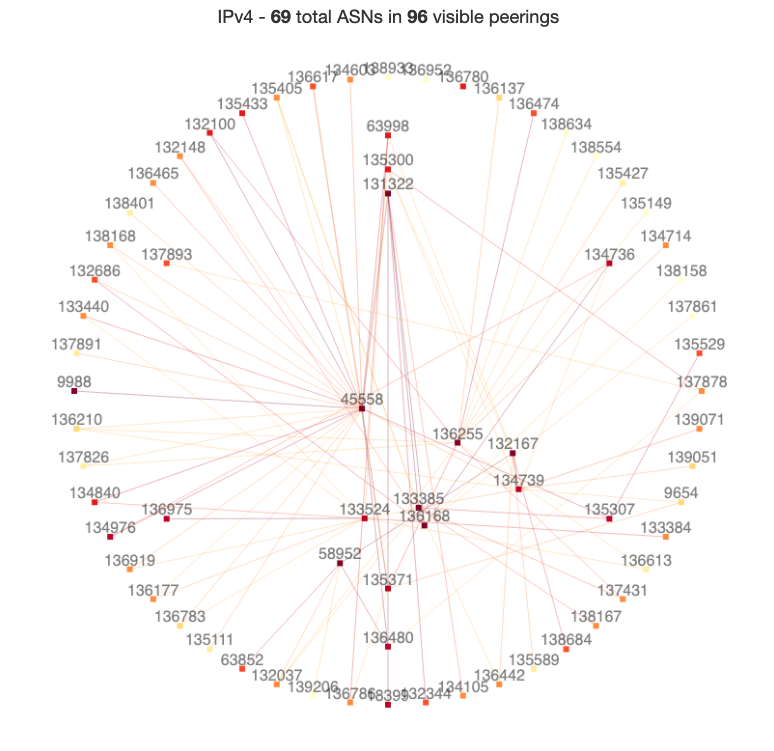 At present, just over 61 million IPv4 addresses are delegated to South East Asia. This means there is 1 IPv4 address for just under every 11 people. Given that 61 million IPv4 addresses won’t even cover half the population of Indonesia, let alone the entire sub-region, we can assume there is probably quite a bit of address sharing (read: NAT) going on, and that IPv6 is needed NOW to cater for the future expansion of Internet connectivity in the sub-region.

The current picture of IPv6 delegation in the sub-region is dominated by Singapore, receiving 83.9% of delegated IPv6 address space in South East Asia since the start of 2018. Click on the /32 or /48 button on the pie chart in FIgure 6 to reveal this statistic.

Interestingly, this large chunk of addresses is only 8.9% of the total number of delegations in South East Asia for the period, indicating that these addresses have been delegated to a small number of networks. Only time will tell whether these delegations translate to an uptick in IPv6 deployment in Singapore from its current capability level of approximately 12%.

While other economies may have been dwarfed by Singapore in the delegations department, several have been making real progress in their deployment of IPv6.

Myanmar has gone from near-zero at the start of 2019 to over 7% IPv6 capable.

Malaysia‘s already strong position has increased by approximately 8% over the course of this year, reaching over 40% IPv6 capable at the time of writing.

Thailand has increased its IPv6 deployment by about 20% since January 2018, with an IPv6 capable measurement of 28.7%.

Viet Nam has continued to push strongly in its IPv6 deployment, increasing from around 25% to almost 40% IPv6 capability over the course of 2019.

The embedded charts in this report are sourced from the APNIC Internet Directory. While the data in the embedded charts will change over time, the analysis and figures in the text and static images in this article are current only at the date of publication.