For decades, the Domain Name System (DNS) has been based on a connectionless semantic: a client sends its query as a single User Datagram Protocol (UDP), and it receives a single UDP datagram with the response. This very simple communication model, along with efficient caching and clear administrative boundaries, is what allowed the DNS to scale and successfully adapt to an ever-increasing demand.

However, this approach has been starting to show its limits in recent years: from DNS-based DDoS attacks to broken IP fragmentation in the public Internet, the picture of DNS over UDP looks bleaker and bleaker. In addition, there is a recent push to encrypt all DNS communication through the specification and deployment of DNS-over-TLS and DNS-over-HTTPS, further phasing out the use of UDP.

In this post, we focus on performance, more specifically between a DNS client (a stub resolver in the DNS terminology) and a recursive resolver. We show that DNS-over-TLS — and more generally any scheme that allows persistent DNS connections — provides an opportunity to improve query latency compared to UDP.

This post starts by defining what we mean exactly by DNS performance, and then moves on to describe persistent DNS connections and their impact on DNS performance.

From the perspective of the DNS end-user, the most relevant performance metric is latency: how long do I have to wait before getting the answer to my previous query?

Most of the time, no useful work can be carried out by the application before a DNS response is received — think of a browser loading a webpage, or an email server checking a DNS-based blocklist. Therefore, reducing the latency of DNS queries has a strong and direct impact on application responsiveness.

On the recursive resolver side, the focus is somewhat different. The main performance metric is ‘How many clients can I serve while providing an acceptable level of service?’, and the related question, ‘What hardware do I have to buy and at what cost?’.

The performance objectives of clients and recursive resolvers are sometimes contradictory. For example, a client could aggressively retransmit its queries several times (perhaps even to several recursive resolvers) to make sure it gets a timely response. However, this would impose an additional load on the recursive resolvers, hurting their own performance metric. Perhaps this could even cause other clients to experience higher latency as a result. Therefore, a delicate balance has to be found between the needs of the clients and the induced load on the DNS infrastructure.

Packet loss is one way a DNS query can go wrong, with a massive impact on latency. UDP has no built-in reliability mechanism such as acknowledgements and retransmission, so it is up to the application layer to detect and recover from losses. This is a big issue for DNS: a stub resolver has no way to distinguish a packet loss from a slow recursive resolver!

Let’s see in detail what happens when a stub resolver queries a recursive resolver: 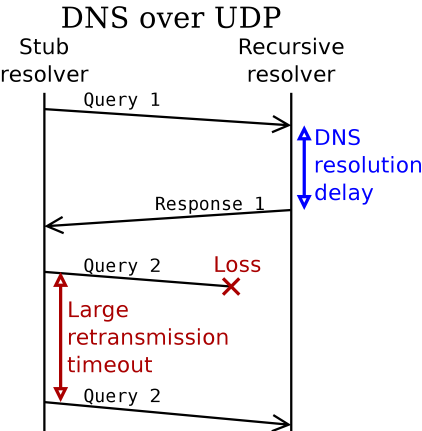 Figure 1 — DNS over UDP: Query 1 is successful, while Query 2 is lost and must be retransmitted.

The ‘DNS resolution delay’ shown for Query 1 can be as large as several seconds: if the answer is not already in its cache, the recursive resolver has to query several authoritative servers through an iterative process to determine the answer. Meanwhile, because of the lack of acknowledgement, the stub resolver does not even know whether the recursive resolver has received the query!

How long should the stub resolver wait for an answer before triggering a timeout event and retransmitting its query? The value of this retransmission timeout should be higher than the maximum expected resolution delay, as shown for Query 2 in Figure 1, to avoid spurious retransmissions.

Table 1 — Retransmission behaviour of the most widely used stub resolvers when configured with two recursive resolvers. The ‘Time before application failure’ is the time it takes for the stub resolver to give up retransmission and signal a failure to the calling application. This data was obtained through experiments, and confirmed with source code analysis (for glibc and bionic) and documentation for Windows.

As shown in Table 1, a single packet loss will cause between 1 and 5 seconds of delay, which is enormous by today’s latency standards. Note that Android tries to limit the impact of such loss events (which can be common on unreliable mobile networks) by implementing a cache in the stub resolver itself and by selecting which DNS resolver to use based on past reliability statistics.

The case for persistent DNS connections

Looking more closely at the above problem, we can identify two different issues:

In Figure 2 below, we show the same example as before, but with a persistent TCP connection: 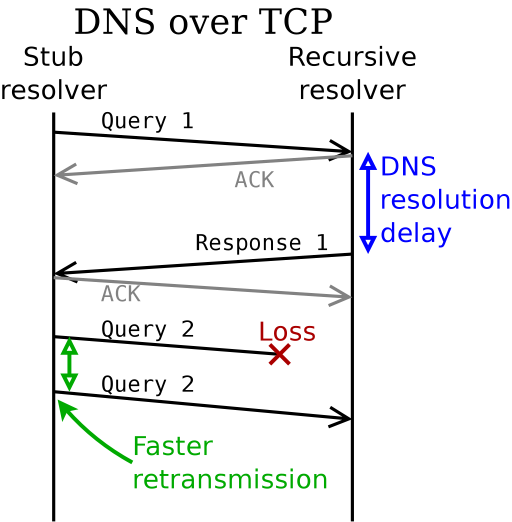 The end result is a much lower query latency in the case of packet loss, because of faster loss detection and retransmission. The overall latency could still be improved though, because TCP suffers from head-of-line blocking between successive queries due to its strict ordering guarantee. Future work using DNS-over-QUIC will hopefully avoid this pitfall.

Will it burn down my recursive resolver?

This is the next question that comes to mind, particularly ‘What if all stub resolvers started opening persistent TCP or TLS connections to their recursive resolvers?’ and ‘How badly would this overload the recursive resolver infrastructure?’.

Our simplified architecture is shown in Figure 3, where each home router maintains a persistent TCP connection to an ISP-managed recursive resolver. Such a large-scale setup could easily lead to hundreds of thousands of simultaneous TCP connections to the same server. Conventional wisdom has it that TCP is expensive, so there is a cause for worry.

To test whether this approach scales, we experimented using a large-scale lab setup. We ran unbound on a physical server (2x Xeon E5-2630 v4), configured for a 100% cache hit. Next, we used dedicated hardware resources to spawn hundreds of virtual machines (VMs). Each VM opened persistent TCP connections to unbound, and then started generating DNS queries over them. We measured the latency of each query, and increased the query load until the point where unbound saturates. This allows us to measure the ‘peak server performance’ of unbound running as a recursive resolver, expressed in queries per second (qps). Figure 4 — Performance of unbound as the number of concurrent clients increases.

To stress the system further, we went up to 6.5 million simultaneous TCP clients: unbound still kept up, with a performance of 50k qps per CPU core! The amount of memory used by unbound and the kernel was 51.4 GB.

Large-scale DNS-over-TCP seems feasible; it is slower than using UDP but only by a factor of 4. Given that the DNS infrastructure is typically over-provisioned to cope with events such as denial-of-service attacks, it is likely that current resolver infrastructure could withstand the additional load. Therefore, DNS-over-TCP can form an acceptable trade-off between improving client latency and increasing the cost of the recursive resolver.

Using TLS for all stub-to-resolver traffic?

Ten years ago, it would have been unthinkable to handle 6.5 million TCP connections on a single server. Today, thanks to the improvement of both software and hardware, it seems to be reasonable to switch all stub-to-recursive DNS traffic to TCP or TLS. Along with many security benefits, this could improve query latency for end users, for a manageable increase in cost on the recursive resolver.

Further work will involve testing DNS-over-TLS and DNS-over-QUIC in the same setup, and trying out other recursive resolver software. Sara Dickinson already performed a similar study in a smaller-scale scenario and found that TLS and TCP have similar performance characteristics.

Another area to study is the impact of connection churn on the performance of the recursive resolver.

This work was presented at RIPE 76. You can view the video and slides here: https://ripe76.ripe.net/archives/video/63/

Baptiste Jonglez is a PhD student at Grenoble Alps University, where he works on improving transport protocols from the end-user perspective.


The views expressed by the authors of this blog are their own and do not necessarily reflect the views of APNIC. Please note a Code of Conduct applies to this blog.