By Stephen McQuistin and Marcel Flores

One of the biggest challenges of operating a global scale Content Delivery Network (CDN) comes from understanding the network behaviours our end users are experiencing.

In order to help get a grasp on this, we’ve made use of RIPE Atlas, a measurement platform from the RIPE NCC. Here, we’ll talk a bit about the RIPE platform and how we use it to assess the behaviour of the networks between our server and end users. While it’s not the only way we use RIPE Atlas here at Verizon Digital Media Services (VDMS), it represents an area where the platform has had a significant impact.

First, I’ll discuss how clients are directed to our Points of Presence (PoPs) and how we measure them. Specifically, we use anycast: many different physical locations (our PoPs) announce the same IP block. Individual routers in the Internet then make decisions about which destination to forward packets to using the Border Gateway Protocol (BGP). The idea is that these routers will each take the shortest path, which will result in end user packets being delivered to the nearest PoP.

We refer to the set of clients which go to any PoP as the catchment of that PoP. We can try and understand where each PoP is drawing clients from by analyzing the end users that fall within its catchment.

The size of these catchments can have a direct impact on the performance of the CDN: a catchment that is too large may be straining the capacity of a particular PoP and may also be causing end users to travel too far to fetch content. Too narrow a catchment can result in under-utilized resources. 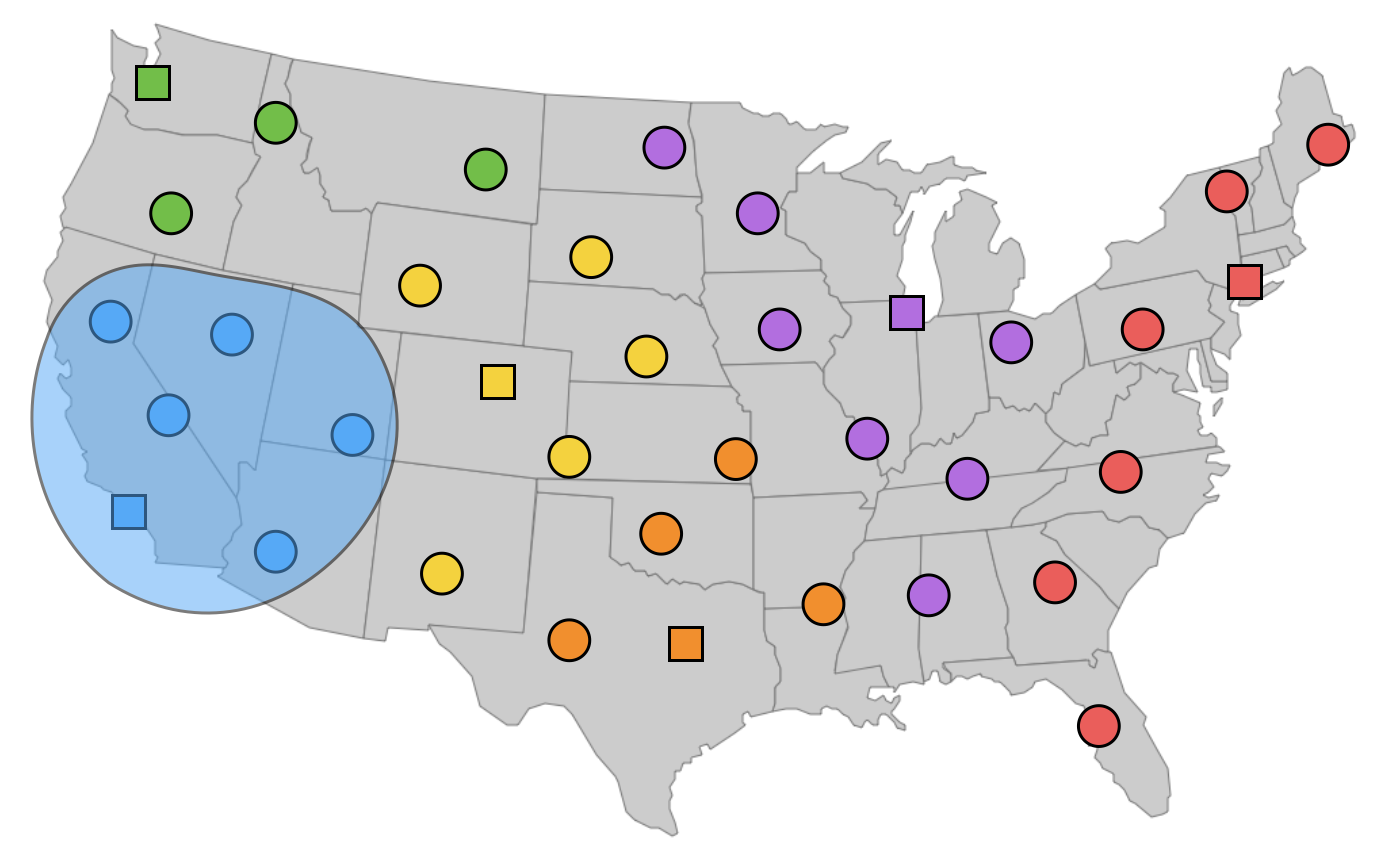 An illustration of catchments in the US: squares are PoPs and circles are users. The colours indicate which PoP each user mapped to, that is, the catchment of each PoP.

While logs from the CDN offer a passive view of where our customers are going in the network, they don’t allow us to explore ‘what if’ scenarios for our announcements. This means it’s hard for us to test and assess potentially new configurations with a data-informed methodology using just CDN logs.

In order to bridge this visibility gap, we use the RIPE Atlas platform.

For the unfamiliar, RIPE Atlas is a platform that makes use of probes which are deployed directly by end users to edge networks. The probes consist of small measurement boxes that a host places in their home or business. These probes connect to a central controller, which then allows users of the system to run experiments from the probes, including pings, traceroutes, and DNS queries.

RIPE Atlas further operates on a credit system: measurements consume credits, while credits are earned by hosting a probe or Anchor, and for contributing to measurement results.

VDMS is a host of special, large, data centre-focused probes known as Anchors. We host 12 Atlas Anchors, which allow us to perform a number of large-scale experiments. These Anchors further provide the RIPE project with greater visibility of the Internet.

RIPE Atlas provides significant global coverage with its probes. While not in every network, they still allow users to get a general sense of how external users may be experiencing our platform. 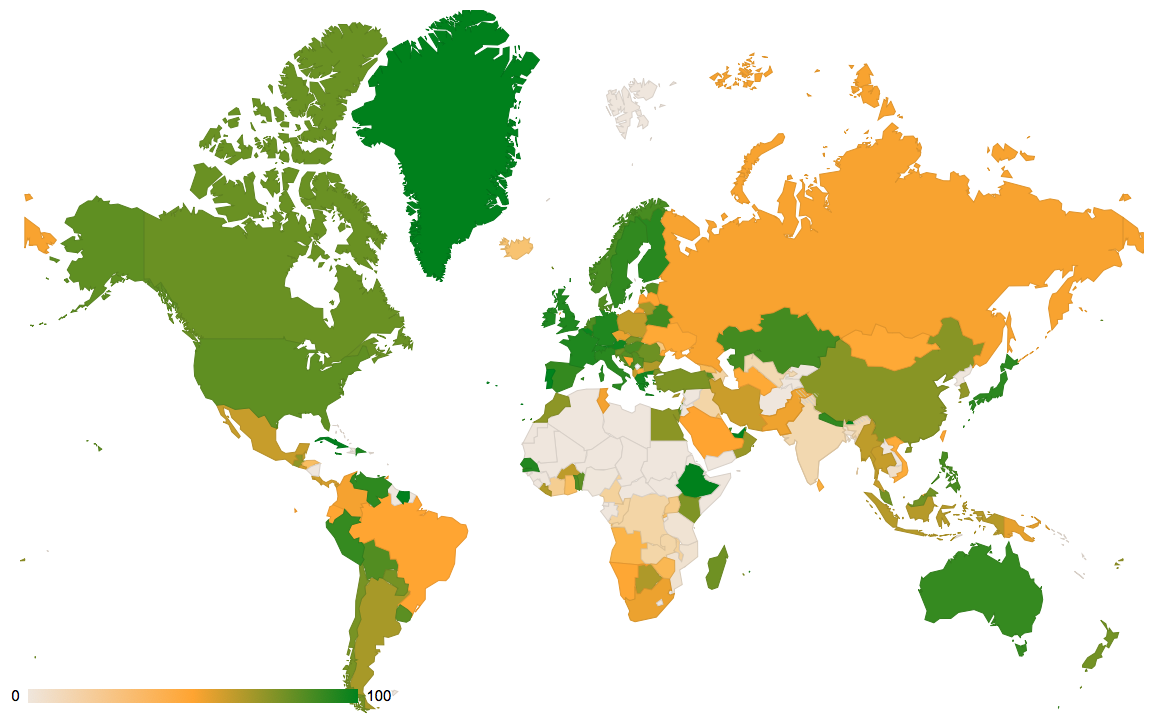 A snapshot of the per-country probe coverage provided by RIPE Atlas. An up-to-date map with breakout details is available from RIPE.

So, how do we employ RIPE Atlas to measure our catchments? And how will we actually determine if one configuration results in a better catchment than another?

In order to measure the catchment of a configuration, we have each probe perform a traceroute to our anycast address. For each traceroute, we correlate the penultimate hop with our internal BGP session information. This allows us to see which router that probe’s traceroute traversed, and therefore which physical PoP the packet was delivered to.

In addition, we can use the round trip time (RTT) from the final hop to determine the latency between the probe and the PoP to which it connected.

So how will we actually use this information? The probes are distributed across many providers and networks, which may see a widely variable performance, making direct comparisons complex. Therefore, instead of considering the performance of each individual probe, we divide the probes into groups. The idea is that each group should represent a similar behaviour in reaching our network.

In order to construct the most meaningful groups we considered a handful of possibilities and compared a number of metrics. Specifically we examine: the size of the resulting groups (if the groups become too small, the data may become extremely noisy), the variation of RTT seen within each group (high variation indicates our groups are likely experiencing widely different behaviour in the network, and the Jaccard index of the paths (a high Jaccard index here indicates the probes traverse similar paths).

Our preliminary results are below: 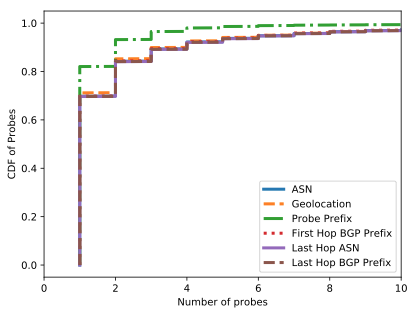 The group sizes observed for each technique. In general, most groups are small.

Here, we see a cumulative distribution function (CDF) of the group sizes. In general, the groups are quite small, with the best case having nearly 70% of groups with only a single probe, even when grouping by AS alone. This is in line with the expectation that while RIPE Atlas has a wide AS coverage, it may consist of only a single probe in many cases. Not surprisingly, the Probe Prefix case shrinks the groups further. A CDF of the difference between the 95th and 5th percentiles. The Probe Prefix provided the closest spread of values.

This plot shows the difference between the 95th and 5th percentile of the RTT for each grouping. Here, curves closer to the upper left-hand corner represent the smallest variation. Not surprisingly, the Probe Prefix provides the most granular information. 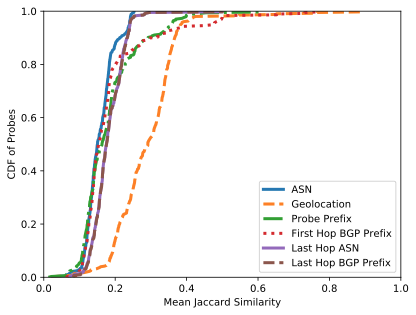 Jaccard index within each grouping when considering large US networks. The geolocation groupings provided the most similar paths.

Here we present the Jaccard similarity when considering a collection of large US networks. The larger networks have largely nationwide coverage but only a single (or small number of) ASes. Here we see that geolocation far outperforms the others, providing us with the most similar behaving probes, in terms of selected path.

While our evaluation of these groups is ongoing, in particular, in regions outside the US, our preliminary results suggest that geolocation data provides the best tradeoff between our three metrics, and we, therefore, use it as our grouping technique for the remainder of the analysis.

(It’s important to note the RIPE Atlas geolocation information is human entered, and therefore subject to different inaccuracies than other geolocation data sources.)

The next step is to use the above traceroute data and groupings to determine the performance of a configuration.

In order to do so, we will consider a simple experiment methodology. We will use two configurations: a control (CTRL) and an experiment (EXP).

The basic idea is that the CTRL configuration will represent a known status quo, and EXP, a proposed new configuration. So for some configurations we pair CTRL and EXP to conduct the above measurement and grouping procedure. Then for each grouping gi, and the rtt measurements taken from each traceroute, we measure their change in RTT:

We further normalize these values into a score s using a logistic curve:

Finally, we weight each of these scores to try and capture the importance of the group it describes. In particular, there may be probes in networks that are not of particular importance to the CDN, for example, probes at a university are not very important compared to probes in a Cable ISP. In these cases, we multiply the score by the fraction of traffic we see from the corresponding AS in a 24-hour period. While not included in the score, the above computation provides us further insight into the gaps in RIPE Atlas’s view: we can see which networks matter to the CDN but aren’t covered by RIPE Atlas probes.

All of these weighted scores can then be summed over all of the groups to provide a total score for the EXP configuration as compared to the CTRL, with a score of 1 indicating uniform improvement, and -1 indicating a uniform decrease in performance.

However, we can further examine the score of individual groups to get a more nuanced view of the impacts of the EXP configuration. Here we can examine which groups saw the greatest increases and decreases. Doing so can allow for more nuanced adjustments to the configuration to try and optimize performance.

Below we provide an example from an EXP configuration which included peering to a number of additional networks versus the CTRL. Here we show the groups that had the biggest improvements, as well as the biggest decreases:

We see that group A showed significant improvement as EXP provided new routes, which allowed the clients from A to reach our servers more directly. Group D, however, shows a moderate increase in RTT. Further investigation found that this was actually the result of a down BGP session, which was preventing the packets from taking an even more direct route in the EXP configuration. Despite this, no other groups saw significant decreases, suggesting the EXP configuration is worth deploying to our production setup.

We can further visualize the changes between our two configurations by plotting them on a map. Here, each point on the map represents an individual probe. Each is coloured by the PoP to which its packets were sent. The map on the left is the CTRL configuration, and the map on the right is the EXP configuration:

The EXP configuration provides much richer connectivity, with the probes more frequently connecting to a more diverse set of nearby PoPs.

Our current explorations are working to improve our validation of our grouping procedures, ensuring that the techniques outlined here are effective outside of North America.

We hope to expand the entire system to using IPv6, a critical and growing part of the Internet. We also hope to validate the ability of the scoring methodology to detect potentially marginal differences between CTRL and EXP, for example, the difference of announcing to a single new provider and adding BGP communities. Finally, we plan to compare the visibility of networks important to the CDN with RIPE Atlas versus our production log data and other newly proposed techniques such as Verploeter.

Through the use of RIPE Atlas, this methodology has the ability to greatly simplify and automate how we configure our network. It has enabled greater visibility into the behaviour of end user networks while creating the ability for making rapid data-driven decisions about our network configuration.

Stephen McQuistin is a PhD student at the University of Glasgow, and a Research Collaborator with Verizon Digital Media Services.

APNIC · 4 hours ago
@apnic
[NetOps} Football is HUGE in Europe, so what happens when they begin live-streaming it in Italy, from the operators' point of view? @flavioluciani81 investigates:
https://t.co/OpJIajEZXq