The recent attacks on the DNS infrastructure operated by Dyn have generated a lot of comment in recent days.

Indeed, it’s not often that the DNS itself has been prominent in the mainstream of news commentary and, in some ways, this DNS DDoS prominence is for all the wrong reasons!

I’d like to speculate a bit on what this attack means for the DNS and what we could do to mitigate the recurrence of such attacks. 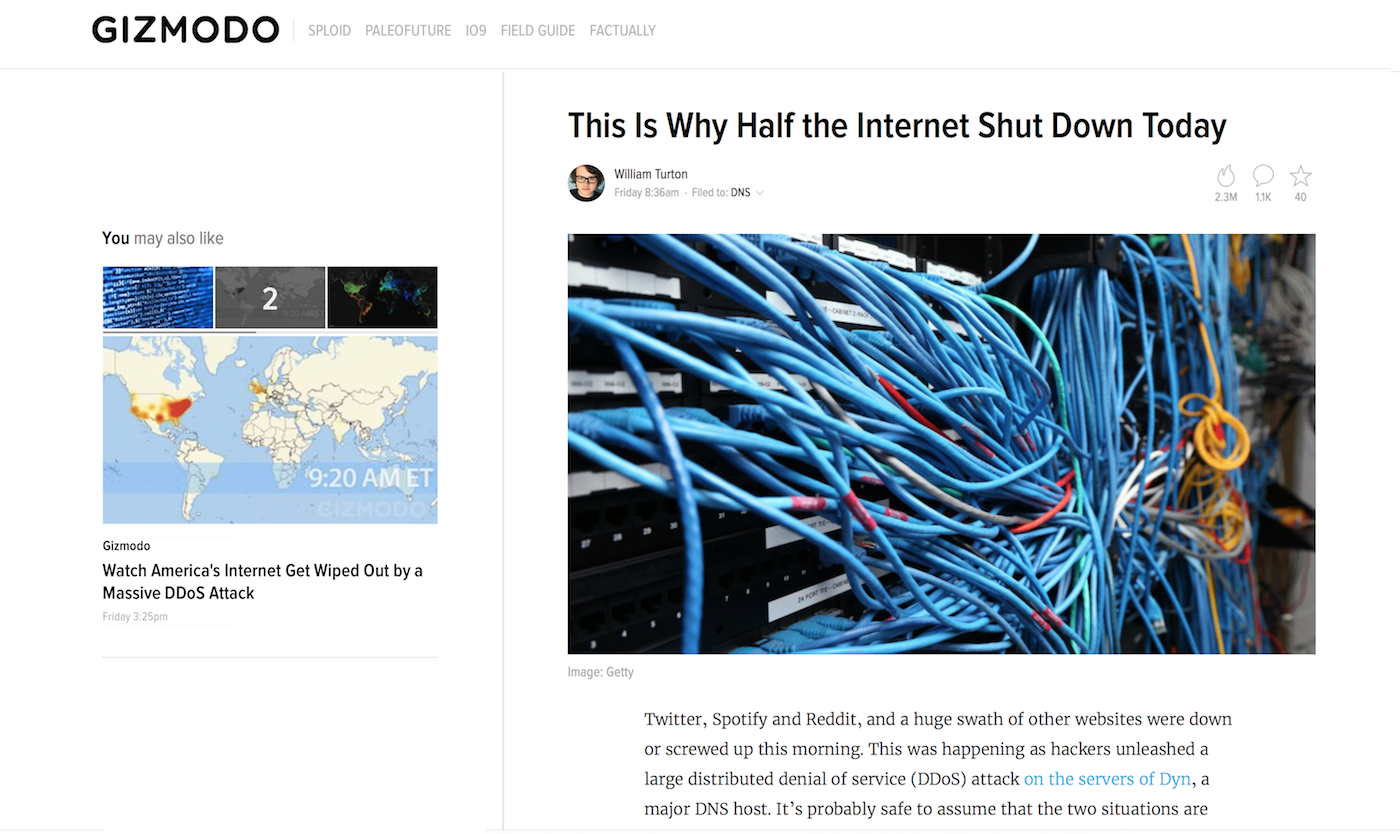 Report of the incident from Gizmodo.com

I should note at the outset that when writing this so soon after the event is a situation, there is not a lot of authoritative information about the attack. So, we’ll need to make a few guesses as to what was going on with this attack.

What we think is a likely guess:

What we don’t know:

What we can guess:

Because of the use of a unique label component as the terminal name in the query, the query is passed to the authoritative name servers for resolution. This will occur even if the local environment performs DNS interception and redirection and diverts externally address DNS queries into the local DNS resolver infrastructure.

The authoritative name servers for the attacked domains were evidently overwhelmed by the query volume and started to drop queries.

As the recursive resolvers lost their local cache entry, the attacked names started to disappear off the net.

Mitigations for this form of DNS DDOS Attack

A common response to most forms of DDOS attack has been to build the wall higher.

The overall intent of all of these measures is to increase the query response capability to exceed the query volume presented during the attack. As long as this can be achieved, the authoritative name servers will not be pushed into being unresponsive, and the attack would fail.

The recursive name servers that handle user queries will hold in their local cache the valid responses from authoritative name servers for the presumably small set of defined names in the attacked name space for a specified period of time. As this timer draws down, the recursive resolver will attempt to refresh the cached data. If the expiration timer expires without a successful cache refresh, the local resolver will purge its cache of this entry.

A possible measure is not to address the attack per se, but to note that the attack must last for at least the cache time to line (TTL) period in order to ensure that the recursive resolvers’ cache expires in all resolvers.

Of course the problem with this is that the expiration timers running in the recursive resolvers will all be running with different epoch settings. So, in the period when the authoritative name servers are unavailable, the set of recursive name servers carrying cached records will gradually expire, causing the name space to gradually wink out across the recursive resolver set, and the pool of affected users will grow as the attack continues.

If the attack uses a random name part that has a fixed pattern, then it is possible to filter out these queries at the authoritative name server and drop them before the server’s resources are consumed in generating a DNS response.

Of course, this is a temporary measure in so far as the next attack will probably vary the random name part in other ways. But as a first response in attack traffic discard, it’s often a useful measure.

There is one observation that is potentially helpful in this space – the pool of IP addresses that query authoritative name servers falls into two distinct pools based on a simple classification of whether or not the address matches the set of known visible recursive resolvers.

There are some 10,000 IP addresses that correspond to the collection of visible recursive resolvers that query authoritative name servers that appear to serve some 95% of the entire user base of the Internet. It is feasible to load this set of addresses into a FIB cache of a front end router and perform a wire speed classification of queries into queries from known recursive resolvers and anomalous queries from individual devices using FIB lookup.

The former could be placed into a normal query queue, while the other could be placed into a lower priority processing queue that might well fail under load. Under normal query loads, this measure would be all but invisible to all users. Under the stress of an attack that directly contacted the authoritative name server, the known recursive resolvers would still receive service while all other queries would experience some query drop rate.

This measure is effective if the attack is based on scripting the co-opted devices to directly query the authoritative servers, and the circuits and switches that provide access to the authoritative name server have sufficient capacity to carry all the queries, including the attack traffic, to the classifying router or routers.

This is not a realistic option today, but it is a means of improving the resilience of the DNS in the case where such random name attacks occur through the recursive resolver infrastructure (the opposite of the case of the IP address filtering option).

When a name does not exist, as is the case for a random name attack, a signed zone response for the query is not only the NXDOMAIN code, but an NSEC record that indicates the span of the zone file that covers the query label. A recursive resolver could cache this record and use it to respond to any query that falls within the same span of names without further reference to the authoritative name server (details of this approach are available on the IETF site).

In this example of DNS query and response, the response indicates that all names between “norton” and “now” are not defined in the root zone. And precisely the same authority section of the response could be used by the recursive resolver for any query name between “norton” and “now” for as long as this negative response is held in the recursive resolver’s cache, without any further querying of the authoritative name server.

There are three problems with this approach which make this particular mitigation response frustratingly unhelpful:

Perhaps this rather disturbing attack incident might motivate some further action in this space.

This is never going to go away. The sheer volume of consumer devices being marketed today is a fertile breeding ground for not just low cost, but extraordinary low quality, devices that use corruptible and often already corrupted software.

Their volume of distribution within a rapacious consumer market that is largely ignorant of technical quality and robustness, and is incredibly price sensitive, ensures that poor quality, cheap and essentially unsafe devices will continue to populate the edges of the Internet. For as long as this is happening, it will continue to be possible to orchestrate thousands, if not millions, of these devices into large-scale attacks that are capable of overwhelming most of our defences. It’s hard to see how just building higher walls of defence will work as a long-term strategy.

We can be smarter about this, and we can use both DNS and DNSSEC, and our knowledge of the way the DNS actually works to build a more robust DNS infrastructure that could be more capable of deflecting these forms of attack. Whether we have the collective motivation to take these steps and actually build a more robust and resilient DNS resolution infrastructure remains to be seen.

Of course, this will not stop the attacks. Like the lion chasing its prey, the first objective of the potential victim is to run away faster than at least one of the others! In this case, the objective is to push the potential set of exploitable vulnerabilities away from the DNS. While there is still work to do in other components of the Internet’s infrastructure, at the very least we can take steps to ensure that the DNS is no longer the easy target of such attacks.

That is assuming, of course, that we truly have a strong desire to try to fix this!

As I have attempted to point out in the introduction, this article has been written based on the assumption that this attack used DNS queries.

From the public information provided so far, there is no basis to believe this assumption over and above the assumption that this was an instance of any of the more “traditional” forms of exhaustion attacks, namely pings, TCP SYN flooding, GRE packets and other ways to clog up the wire and the server(s), as distinct from specifically clogging up the DNS function of the servers. Much of this article is speculative in nature, looking at potential mitigation measures if we had a DNS query attack.

If this was a brute force exhaustion flooding attack then it’s perhaps a little harder to speculate on mitigation measures, as it’s often the case that if you cannot prevent the packets at the source, then you need to find some readily identifiable “signature” of the attack stream that will permit you to pull out the attack traffic before it reaches the critically stressed resource.

We may or may not get to know more about this particular attack but one thing we can expect with much confidence: there will be more attacks. The Internet of Stupid Things is not going to get any smarter any time soon!