Why did you choose a career in your industry? Does the reason stem from an interest you had when growing up? Or was it something you fell into?

For Chika Yoshimura, a network engineer at NTT Communications, it wasn’t a case of her choosing the career but the career choosing her.

“One of my high school teachers told me ‘Chika, you don’t choose a career but a career chooses you. You’ll see.’ Even though I didn’t understand what he meant at the time, this is exactly what happened to me,” says Chika, admitting that becoming an engineer wasn’t her first choice at university, nor was it after completing her degree in Internet Architecture and Internet Governance.

Thinking hard about what ultimately lured her into the profession, Chika points to two factors. “One was I liked the diversity of the industry, namely the fact that people from all sorts of industries and backgrounds played a part in making the Internet.”

“The other factor was the atmosphere of the communities I joined at university,” these being local ICANN and ISOC chapters. “They were very open-minded and welcoming of anyone, even to a student like me.”

The importance of these communities and the environment that they foster cannot be taken for granted when it comes to addressing the leaky pipeline phenomenon that science and technology industries are facing; where the further a woman advances in her technical profession, the lower the number of female peers.

Although governments and universities worldwide have made efforts to increase female tertiary enrolments in ICT-related programs, they have made little difference so far, with the female-to-male ratio intractably stuck at 20:80.

There are no definitive figures for Japan, however, stories featured in The Japan Times  (2015) and The New York Times  (2014) examined the lack of women working in technical positions in Japan’s ICT industry and similar lack of women, compared to men, enrolled in science and engineering courses in Japanese Universities – an imbalance that was also ultimately affecting workforce numbers. One of the reasons given by some female students for not choosing to study science and engineering was not because they weren’t interested, but rather it was socially unacceptable.

“The widely shared perception that studying science could be the kiss of death for a young Japanese woman’s romantic life is one of several causes behind the low ratio of female students in science and engineering departments.” – Miki Tanikawa, New York Times

Reasons like this are difficult for any industry to overcome by itself due to their social context. This is why efforts made by groups like ICANN, ISOC, and Girls in Tech have been important in helping improve gender imbalances. And in the case of Chika, these efforts seems to be paying off; Chika is a leader in the industry and the first female chair of the Japan Network Operators Group (JANOG).

Chika says this position is what currently excites her the most, as she feels she is able to give back to the communities that helped her all those years ago, as well as help foster JANOG’s efforts to support women working in the Japanese ICT industry. 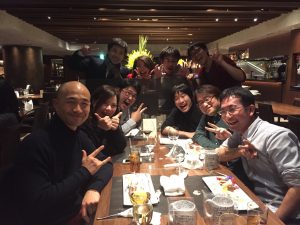 “Even though there are not so many women who work in the ICT industry in the JANOG community, they are wonderful and encouraging,” says Chika. “At JANOG meetings, we sometimes have a small session to talk about anything around women in the industry. These sessions, and industry communities in general, are helpful as they allow you to find friends who understand what you are facing and with whom you can share your challenges with.”

Career in ICT is liberating

Izumi Okutani is another active female member in the Japanese Internet community who, like Chika, was unsure of exactly what to do after university.

Having completed her social science degree in 1998, majoring in Comparative Cultures, Izumi was attracted to the industry by its open-minded intentions, the global opportunities it provided, and a curiosity to “understand how this technology called ‘the Internet’ works”.

“Given it was a relatively new technology that started in the US, I expected the industry to be open and liberal to new ideas, and less conventional than other industries such as banking, 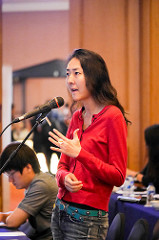 security, construction and manufacturing. I felt this would fit better with my nature,” says Izumi, who has been working for the Japan Network Information Center (JPNIC) since 2000 as a policy liaison.

“I had also always wanted to do something that would bridge between Japan and overseas,” something which Izumi confesses she has been lucky to do plenty of in her job.

Izumi recognizes that she is lucky to have found a role in the industry that fits her nature and skills – “policy liaison is a very rare job in Japan” – but points to how such diverse positions and opportunities are what make the industry so liberal and inclusive, particularly for women.

Izumi adds that her vantage point of the industry is not all encompassing and she recognizes that women in other parts of the industry, including engineering, do face challenges – a sentiment Chika confirms.

“In Japan, lots of women work for the ICT industry but the number of women engineers is still not so many as far as I know,” says Chika. “Also, most women engineers that I know are in their 20s or 30s. The number decreases as they age.”

Chika says she believes that in large, traditional companies, there is a tendency to not promote engineers – making the position (even for men) less secure and more constrictive in terms of salary and work-life balance.

Izumi also points to the influence of hierarchical gender traditions still at play, although not as obvious as in the past, as well as the pressures placed on working mothers living in large cities who don’t have family to look after their children.

“I feel there is still a subtle social perception, by both men and women, that men are superior in making ‘important decisions’, for example middle-aged men delivering speeches in formal scenes is often considered to carry more weight and authority.” According to an ILO report, the ratio of women in management position in Japan is 11.1 %, ranked 96th in the world.

“However, I think women working in the ICT industry in Japan have less challenges than in other conventional industries. Overall, in the day-to-day working level, I would say the ICT industry in Japan provides fair and equal opportunities for women, especially if you have expertise. If you are an expert, you get judged by your actions and the substance of your work, not by gender, which is what I like about our technical communities.”

Despite this, Izumi says Japan’s social infrastructure can not always meet the needs of women wanting to work.   “Many women are not able to come back to work casually after giving birth, as the number of daycare centres is limited with a long waiting list. This is a social problem, especially in Tokyo,” she says.

Izumi hopes the Internet can hopefully play an important role in alleviating this stress.

“I hope there is a role the Internet can play to provide flexible options to support some of these women, including remotely working from home, which may save time for mothers who need to  take and pick up children from/to daycare centres and commute to the office.”

Having both established themselves as leaders in the industry, Chika and Izumi are often asked for advice from young women trying to break into the ICT industry. Both point to the importance of getting involved in the technical community.

“The most important thing for me is to keep having an opportunity to meet people so that I get motivated to become a better person than I am today,” says Chika. “This is why I’m really enjoying being the chair of JANOG as I have so many opportunities to meet people in our community.”

For Izumi, “getting involved in community activities gives you networking opportunities with interesting and intelligent people, and a bigger picture of what’s happening around the industry, which would be inspiring in your career. It also provides chances to develop your skills and be engaged in interesting projects. There are many things you can learn from capable colleagues.”

Looking back on their careers, both Chika and Izumi are thankful they made the choice to work in the ICT industry, or if we are to believe the words of Chika’s high school teacher, they are thankful that an ICT career (community) chose them.