Universities have played a pivotal role in the life of the Internet.

Since it was first conceptualized, much of the Internet was nurtured largely within university walls. Some university researchers have helped to develop it. Most, if not all, have relied on it to advance their research by sharing data and collaborating with other researchers all over the world.

Bandung Institute of Technology (Institut Teknologi Bandung or ITB) is no exception. It and the University of Indonesia were pioneering institutions that helped establish the Internet in Indonesia.

Affan Basalamah is Head of Development and Director of Information Technology Systems at ITB. Since he began as a student at the university in 1996, he has been involved in everything from rolling out network cable to overseeing the university’s virtual network.

“I still remember rolling out the yellow coaxial cable all over campus,” says Affan. “We hung the cable on electric poles and light poles, just like Christmas decorations. 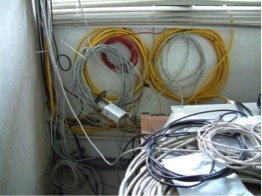 “Onno W. Purbo, who was supervising the roll-out, was warned by the university to bury the cables or else they would but cut down. We decided internally that it was too expensive to bury them so we left them up. Not one yellow cable was cut.”

This maze of yellow cable would become the campus’ high-speed backbone. It was also one of many important developments in 1996, coupled with the /16 it acquired some years before, that made ITB an Internet leader in Indonesia.

Providing Internet access for the world of education and research

In September 1996, ITB invested in a Ku-Band satellite ground station to connect with networks internationally via Asian Internet Interconnection Initiatives (AI3) Project. It also added 2 MB/s interconnection to TelkomNet for local traffic. Both of these made ITB’s network one of the most advanced in the country.

ITB recognised this investment was something that should not only benefit them but the whole of Indonesia. At the time Onno Purbo, who was now one of Indonesia’s leading experts on Internet technologies, said:

‘ITB’s commitment is to assist and provide Internet access for the world of education and research in Indonesia. It is hoped that ITB can increase its service to community development of the Indonesian nation.’

Editors note: We will return to Onno in this blog series 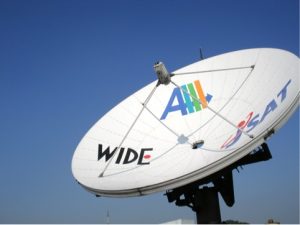 From 1997-99, ITB connected more than 25 Indonesian educational institutions to the Internet through its network. Affan says many of these connections were made wirelessly and could not have happened if not for the ITB’s rich history in radio and wireless technology.

“ITB’s Amateur Radio Club inspired much of early Internet development in Indonesian. Robby Soebiakto is one of the amateur radio gurus among us in Indonesia. He taught us how to conduct data communication over radio, known as packet radio, and interact using TCP/IP protocols. He also taught us how to use amateur microsatellites for data communication.

Affan says another important part of the process was building capacity in these institutions.

“We used to visit those institutes and teach them how to build their own low-cost campus network, how to maintain their infrastructure, and how to educate and train all the people so they could run their network by themselves.

“In many ways this provided them with a foundation for when they were able to purchase their own connection to the Internet in the early 2000s.”

Affan says he was lucky to be a part of these preliminary network-building stages as it allowed him to understand the basic foundations of networking, something that he encourages many networkers to learn today.

“Today there is no need for the yellow cable. Virtual networks can be created across Wi-Fi and in the cloud. This is great as we can now create networks faster and with more flexibility.

“However, I do miss the physical connection. I tell students that the new ways of developing networks, particularly virtual networks, is not so different to the old ways. You still need to know the IP address routing, DNS, and many other old ways of doing things.

“By having an understanding of the way physical networks are created it is easier to trouble-shoot when something goes wrong with virtual networks.”

Virtual networks can be complex but Affan says people need to embrace the new technology.

“Networking has become harder. It’s not just IP routing anymore. We are also dealing with various devices and security incidents as more people and devices connect to the Internet,” he says.

“When I first started in my career the only access was via a PC. Now we need to build networks that can handle notebooks, smartphones, tablets and any future BYODs [bring you own device]. “It’s challenging but it’s also more streamlined. Virtual networks are so fast and perform so well today you don’t know you are running your service on a virtual server.

“I tell people that right now you don’t need to buy the physical server you just need to subscribe to our private cloud services and within minutes you can get the server you want rather than wait at least a couple of months for us to get you a physical server. Not only this, but you can do a lot more with this infrastructure.”

Affan says a priority is educating the networking community and university researchers, who rely heavily on such networks to collaborate and share content, about these benefits – an objective not too dissimilar to the objective stated by Onno back in 1996: ‘to assist and provide Internet access for the world of education and research in Indonesia’.

“We are committed to delivering a network of the future that allows our researchers in chemistry, biology, physics, whatever discipline, to be able to collaborate and achieve their objectives. Such research is important because it often provides the foundation to commercial and industrial innovation, which Indonesian society and economy can benefit from.”