Izumi Okutani was part of the team that developed the global policy that helped fairly distribute IANA's remaining IPv4 to the RIRs.

In this series, we shine the light on number resource policies that changed the development and growth of Internet infrastructure in the APNIC region and reflect on the impact that number policy makes.

In February 2011, the Internet Assigned Numbers Authority (IANA) allocated the final blocks of IPv4 addresses from the ‘free pool’ to the Regional Internet Registries (RIRs). Up until that time, RIRs were allocated IPv4 addresses by IANA — typically a /8 — when they asked for them.

How did IANA decide how to allocate the final blocks of IPv4 address space?

IPv4 exhaustion no longer a case of ‘Boy who cries wolf’

Although IPv4 exhaustion was a known concern for Internet operators from the early 1990s, it was not until the mid-2000s that discussions on how to prepare took place. This coincided with an acceleration of global allocations of IPv4 — particularly in fast-growing economies in the Asia Pacific; a fact that did not go unnoticed in the Japanese Internet community.

In December 2005, the Japan Network Information Center (JPNIC) established a study group to review IANA’s IPv4 allocation process as well as strategies for the day that this pool of addresses would be exhausted. 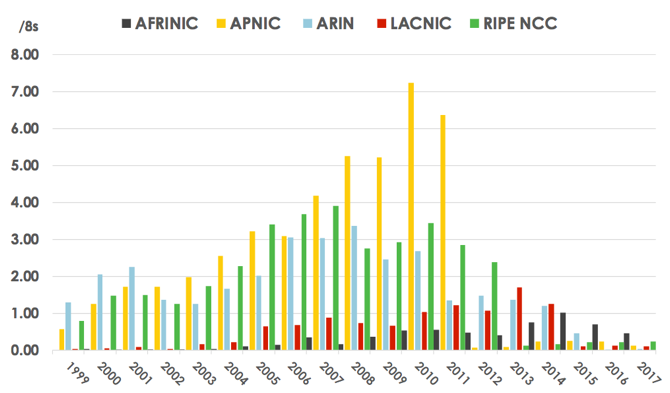 Figure 1 — The number of /8s issued by IANA to the RIRs increased exponentially throughout the 2000s, particularly to APNIC. (NRO 2017, Q4 report)

“The group was established to raise awareness of the situation within the industry as a whole, beyond the core experts in the community,” remembers former JPNIC Policy Liaison, Izumi Okutani.

“Before this time, there had been a few times where the possibility of IPv4 exhaustion had been raised, which for some had created a ‘boy who cries wolf’ situation. People initially assumed this was another one of those cases where someone raised it but it was not likely to happen in the foreseeable future. There was a need to demonstrate with facts that this time we were really on the path to exhaustion of the unallocated IPv4 address pool.”

The study group’s subsequent report ‘Analysis and Recommendations on the Exhaustion of IPv4 Address Space’ (presented at the JPNIC Open Policy Meeting in April 2006) made the community realize the importance of preparing for the situation; particularly the need to act before exhaustion happened.

“It certainly got people thinking seriously about the reality of the situation, and the policies and strategies needed to manage the exhaustion, not just at a local level but globally.”

Izumi remembers much of the discussion centred on IANA’s ‘first come, first served’ allocation process at the time, and whether it needed to be changed to fairly divide the last pool of addresses among the RIRs.

“Up to that point, the IANA’s ‘first come, first served’ allocation process was seen as a fair system that accommodated demand, as RIRs could always go back to IANA for subsequent allocations.

“However, several community members considered that when the available stock of IPv4 was limited it may lead to an ‘address grab’ by some that would leave other regions without enough addresses to manage the consequences of exhaustion. This led to discussions on what was fair, based on changes in circumstances and conditions,” she says.

The JPNIC community reached consensus that equal share of the last five /8s would be a better approach to provide RIRs with more certainty when the address pool was exhausted and, in doing so, raise awareness among the RIR communities to prepare for a world without freely available IPv4.

The JPNIC study group’s ’s findings also provided the catalyst for the economy’s IPv6 strategy; inspiring a joint Task Force on IPv4 Address Exhaustion, established in 2008, and the establishment of a Study Group on IPv6 by Japan’s Ministry of Internal Affairs and Communications.

However, for the ‘equal share’ approach to work, all five RIRs needed to agree.

“It was a global policy, which, unlike regional policies, needed consensus from each of the five RIR communities,” explains Izumi.

During this policy tour the team discovered that a group within LACNIC had also been working on a similar proposal. Izumi remembers that at first, there was concern that the LACNIC proposal would compete with prop-046 and confuse people, but the teams worked together to propose prop-055.

“Having this other perspective helped clarify each other’s intentions and made it a far more considered and global proposal. We also helped each other in reaching global consensus. It was a great coordinated effort, which initially started from the Japanese community, then expanded to the APNIC region based on regional consensus, and then collaboration with colleagues from the LACNIC region.”

The global Internet number community agreed, and prop-055 reached consensus among all five RIR communities the following year before being approved by the Address Supporting Organization and finally ratified by ICANN in March 2009.

The policy provided the RIR communities with certainty and time to prepare for a world without available IPv4 addresses; with flexibility for each region to decide how they would distribute the final /8 block in their respective regions. Knowing that each RIR was going to receive a final /8 from IANA allowed each community to discuss the most appropriate way to allocate the final addresses to those organizations that needed it.

In the case of APNIC, subsequent regional policies were proposed and implemented to allow existing Members access to a portion of the 103/8 block it received and have enough remaining to accommodate requests of new Members for many years.

Prop-055 radically changed IANA’s global IPv4 allocation policy from a demand-based approach to switch to an equal division of the last five /8s among the RIRs, helping to avert a potential lopsided ‘address grab’, which could have left some regions without enough addresses to manage the consequences of exhaustion.

It was the first important step in managing the global depletion of IPv4 addresses. The global policy also provided the spark for new regional policies that would change how the remaining IPv4 addresses have been delegated by RIRs to their Members.

Izumi’s tips for becoming involved in the policy process

“Take time to engage with community members. Unless your proposal is very straight forward, it could be challenging to get immediate support from everybody. Once people understand the intention behind your policy proposal, people will be more inclined to support it.

It also helps to have a good understanding of the policy process. Sometimes, patience is needed to achieve consensus, although, in general, the APNIC Policy Development Process is fairly pragmatic and efficient.

What prop-055 highlights nicely, is that it can start out at a national/sub-regional community level and end up changing something globally.”