Until recently, few network operators protected themselves from BGP hijacking attacks by implementing some form of Route Origin Validation (ROV).

One form of ROV is supported by the Resource Public Key Infrastructure (RPKI); using so-called  Route Origin Authorizations (ROAs), which allow BGP prefix-origin pairs to be validated before they are accepted by the receiving router.

An Autonomous System (AS) performing ROV is less vulnerable to receiving BGP hijacking announcements than an AS not doing so. ROV increases the chance that traffic going out of the AS is routed to the correct destination AS (if a ROA for the destination prefix exists).

Figure 1 — An example of a RPKI ROA, which authorizes AS13335 to announce the prefix 1.1.1.0/24 (other ASes are not authorized to announce 1.1.1.0/24). A BGP announcement originated by any other AS would be flagged as INVALID by any router performing ROV.

RPKI-based ROV is gaining traction (examples: 1, 2, 3, 4, 5, 6, 7), however one problem is the amount of broken legacy ROAs that cause many INVALID prefix-origin pairs.

In the past, IP holders creating incorrect ROAs weren’t a problem, as there was no negative effect of broken ROAs — considering no one performed validation. However, these inconsistent ROAs are now causing many RPKI INVALID BGP announcements (INVALIDs), which is, to some extent, blocking wider ROV adoption.

Answering these questions should help to efficiently contact affected parties, and set us on a course towards cleaning up and limiting the number of unreachable INVALIDs, so we can start identifying BGP hijacks more confidently.

As of 14 September 2018, there are more than 6,700 INVALID prefix-origin pairs (IPv4 + IPv6). But how many prefixes would actually become unreachable in a ROV environment?

To answer that question, I filtered the complete set of INVALIDs to those that actually result in unreachable IP space.

Here are a few examples of INVALIDs I don’t care about because they don’t result in unreachable IP space (alternative prefix-origin pairs are covering for an INVALID). 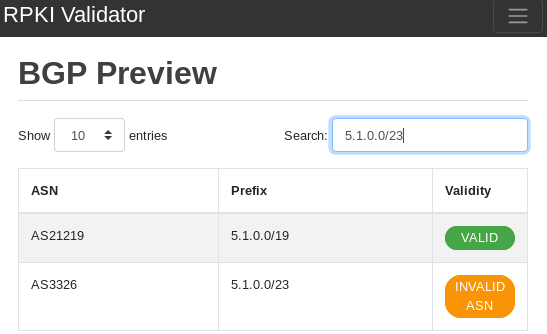 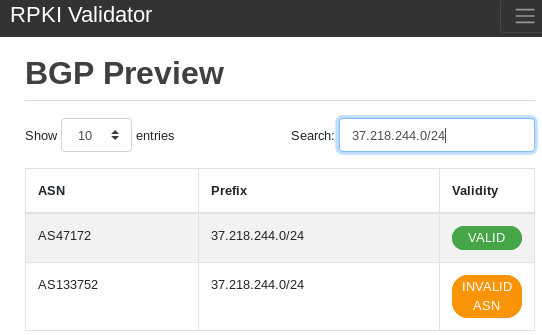 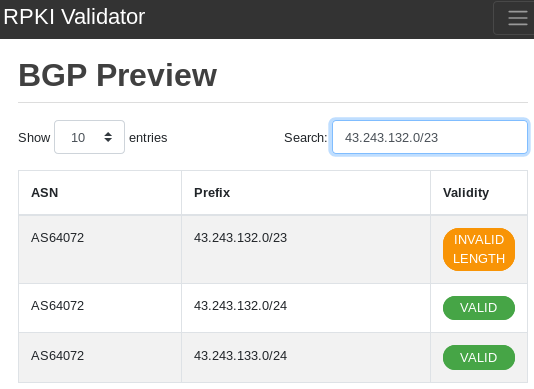 After filtering these cases that do not result in unreachable prefixes we are down to 2,415 (IPv4: 2,323 + IPv6: 92) prefix-origin pairs (2,403 unique prefixes). This remaining set is actually unreachable in an environment that performs ROV.

There are also prefixes with partial reachability as seen in the example below. For simplicity, let’s consider the entire prefix (202.57.120.0/21) unreachable even though half of it is reachable. So this one is also part of the 2,415 prefix-origin pairs we’d consider unreachable. Distribution of INVALIDs by RIR

Most INVALIDs are in the LACNIC region. This is just by the number of prefix-origin pairs; it doesn’t say anything about the size of the affected IP space since a single prefix can be more relevant (/16) than others (/24). 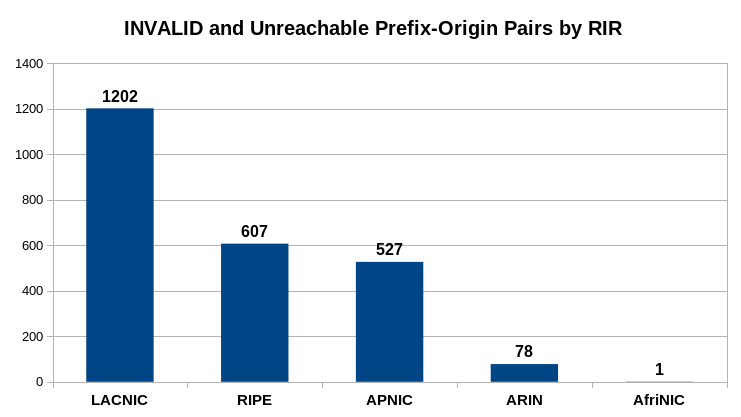 Break down by reason

Break down by RIR and reason

Break down by announcing AS (top 10)

In total, there are 454 unique ASes announcing unreachable INVALIDs.

Which ROAs cause most INVALIDs?

By fixing the top 10 ROAs on this list, we could solve more than 20% of INVALID prefix-origin pairs!

The listing below shows ROAs and how many INVALIDs they cause (this is a slight simplification since multiple ROAs can invalidate the same prefix).

The next step (which was my initial intention when looking at INVALIDs) is to send emails to affected IP holders and ask them to address the INVALIDs. However, I believe the impact would be greater if these emails came from a trusted entity such as the RIR relevant to the affected IP holder instead of a random entity (myself) who they have never had any contact with before.

Asking RIRs to reach out to their Members also scales better since every RIR would only have to take care of their own Members. Figure 7 provides a brief breakdown of how many Members each RIR would actually have to contact (this is a rough approximation since I use the ASN and not the actual IP holder to count Members): 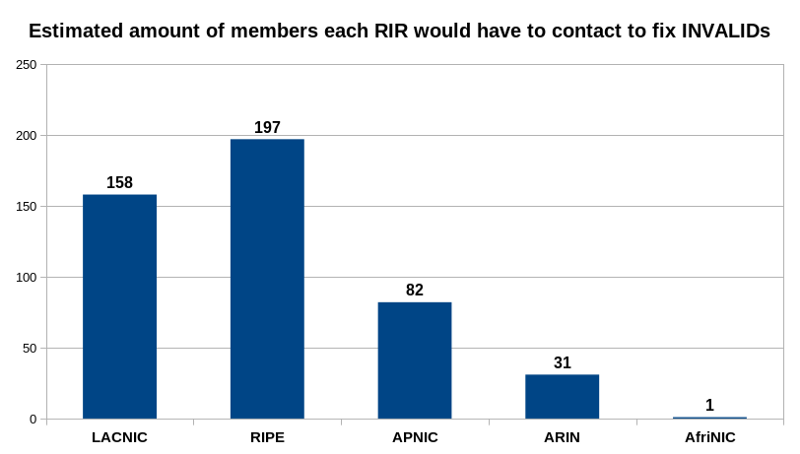 Figure 7 — An approximation of how many Members each RIR would have to contact to fix INVALIDs.

Sending these <500 emails could actually make a difference in reducing the number of INVALIDs.

What role do RIRs have in monitoring and informing RPKI INVALID BGP announcements?

This is a question that’s worth discussing in all regions serviced by RIRs. For me, I’d like to know whether RIRs:

In the event RIRs do undertake such outreach, it will be important to measure the number of prefixes that become unreachable if a router performing ROV discards RPKI INVALID BGP announcements over time to see how effective the outreach program is. NIST’s RPKI monitor has graphs but they take all INVALIDs into account, not just those that result in actually unreachable IP space in a ROV environment.

For this reason, I propose the following future steps should be considered:

Don’t take the numbers too seriously; I made a few assumptions (RPKI validator 3 API documentation could be improved) and there might be some corner cases I didn’t take care of, but the results are sufficiently similar to other people’s results.

Adapted from original post, which appeared on Medium on 14 September 2018.

Nusenu cares about privacy enhancing technologies and likes Internet Metrics. He came across RPKI and routing security when measuring how resilient the Tor network is against BGP hijacking attacks.