Many regard wireless mesh networking as a potential key technology to provide low-cost Internet over a specific coverage area.

The One Laptop per Child initiative, which enables students in low-income economies to access content and media, is just one of many early examples of the capacity and uses of the technology.

Even though the technology is still in its early stages, there has been a lot of research into WMNs, particularly looking at how well mesh networking can support long-distance wireless communication. We, a collaborative of five university researchers across three continents, are also interested in answering this question for the purpose of using the technology as a low-cost medium for multimedia multicasting applications.

This blog post discusses a potentially more effective way to address the ongoing challenge of performance degradation over multiple wireless hops that our team has contributed to this ongoing field of research.

Although a wireless mesh network is physically extensible, we carried out simulation studies to understand the extent to which transmissions via multiple wireless hops suffer from rapid drops in performance as the number of hops increases. 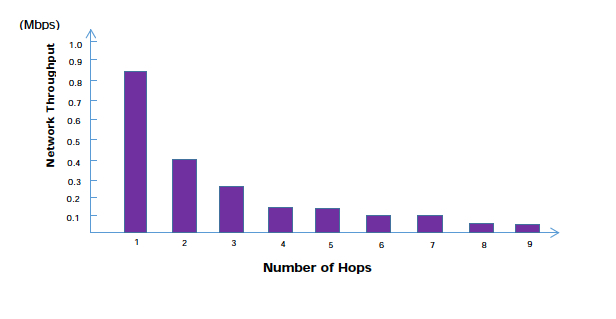 Figure 1 – Throughput performance over multiple WMN hops in our simulations.

Due to the performance degradation over multiple hops, it is difficult for a WMN alone to guarantee high-performance communications over long distances. However, the flexibility and low cost of physically extending a WMN still makes it an attractive basis for solutions providing large-scale wireless coverage. As such, quite a few studies have explored alternative approaches for carrying long-distance communications in WMNs.

Major current strategies in controlling interference over multiple hops include:

Our idea was to integrate Internet links to bridge the distance between remote WMN nodes. An example of such integrated communications is shown in the figure below. Instead of relaying data via a number of wireless hops between S and R, the Internet shortcut enables data transmissions to avoid suffering from wireless interference over a long distance. 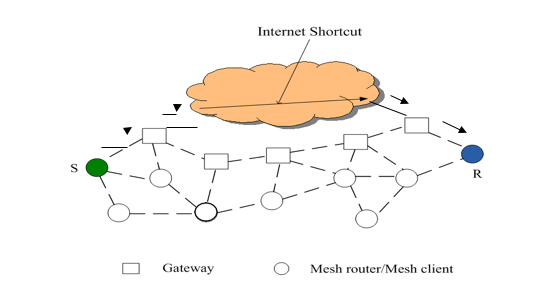 In our paper (Resource-Aware Video Multicasting via Access Gateways in Wireless Mesh Networks), the idea is developed with algorithms that form an architecture supporting long-distance wireless multimedia multicasting applications.

The two-tier integrated architecture algorithm chooses communication paths — intra-mesh paths or integrated paths — between nodes by organizing them into a clustered and layered architecture; the weighted gateway uploading algorithm avoids ‘busy’ gateways by uploading video in a manner that balances load and reliability; the link-controlled routing tree algorithm decreases interference from parallel multicasting by constructing a multicast tree with the least number of forwarders in each access area; and the dynamic group management algorithm provides low-overhead maintenance of the multicast forwarding trees when dynamic changes take place.

Our design principles are validated by our extensive simulation results, showing that the multicasting algorithms can achieve up to 40% more throughput than other related published approaches in single multimedia multicasting communications.

This hierarchy architecture is flexible enough to incorporate progressively sophisticated enhancements to each individual algorithmic phase. Moreover, it dynamically changes with the variation of video performance and group membership. It may also appeal to Internet service providers as it uses already established Internet resources to enhance a fundamental issue faced by wireless multi-hop networks.

Wanqing Tu is a Senior Lecturer in the Department of Computer Science at the University of Auckland.