Last month I wrote on the APNIC Blog about the ASO Review process, and encouraged readers to participate in the second consultation session, scheduled during APNIC 45 in Kathmandu.  I’m happy to report the session went well, with active participation from members of the APNIC community.

The Kathmandu consultation continued from where the first left off: with the consensus of the APNIC community at APNIC 44 to explore “non-status quo” options suggested by the ASO Review Report (s9.2).   These options included an “minimal change” model with no structural adjustment, and a “two-house” model which involved a rearrangement of the NRO EC and ASO AC responsibilities.

Izumi Okutani opened the APNIC 45 session with a “Strawman” proposal based on the “two house” model, for consideration by the community.

After an active discussion, there was strong community support for the two-house structure consisting of a “Policy Council” (PC) to make recommendations on Global Policies, and a “Registry Council” (RC) to address any RIR operational matters such as PTI services. This would replace the current structure in which the ASO Address Council and the NRO Executive Council are present at ICANN, but with sometimes confused responsibilities.

Izumi described the proposal as a clearer division of responsibilities between the PC (for policy matters) and RC (for registry matters). She also introduced an idea, which was presented by ITEMS (the third party consultant which produced the ASO Review report) during ICANN 59, that each council could consist of 10 members each, retaining the existing total of 20 individuals in the ASO AC and NRO EC combined.

In Kathmandu, there was strong support to the strawman proposal, but there was no consensus on the number, or the selection mechanism for the members of these councils. As we heard many times in Kathmandu, the two-council strawman proposal is not fixed or finished and much remains to be decided, particularly as other RIR communities discuss the issue, and hopefully also consider the APNIC proposal.

Here is the video archive of the session:

In a previous Blog post, I described the ways in which RIR staff and community members participate in ICANN, and the reasons for participation. As I said, the RIRs can always determine how they participate in ICANN: it is always our choice to determine the scope of work and the interface we would like to build, and how these things will change over time.

Personally, I support a two council ASO structure as suggested by the ASO Review Working Group in Kathmandu. First, because it helps to clarify the longstanding confusion between ASO AC and NRO EC. Under this proposal, the ASO AC will continue to do what it has done well over the years, namely, global IP addressing policies, as the Policy Council. The operational issues and organisational relationship between the RIRs and ICANN that have been managed by the NRO EC, would be handled in future by the Registry Council, also (I suggest) appointed by the RIR boards.

The strawman proposal suggested in Kathmandu offers a useful rearrangement that clarifies roles and responsibilities under the ASO, without adding any extra work or bureaucracy. It also reflects the proper division between Policy and operational RIR matters, which exists in every RIR region. If the community would agree on 10 members for each council, I see no extra cost or burden for participation, as the ASO AC currently has 15 members and the NRO EC has five. 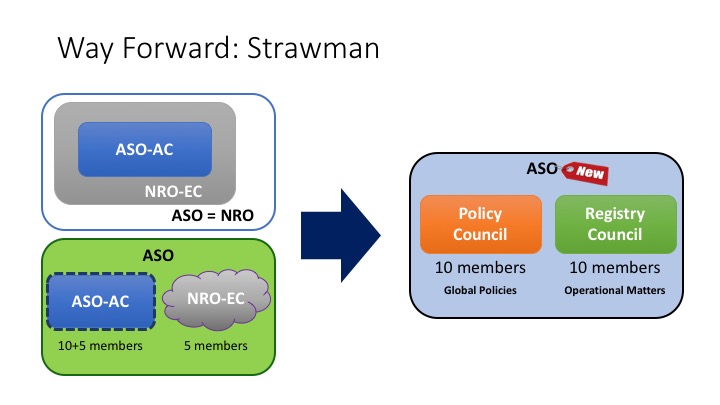 It seems there is support from the APNIC community to carry forward the two-council strawman proposal for consideration by the other four RIR communities, with the caveat that we have not agreed yet on the number or selection mechanism of council members. If you have any objections or proposed modifications to the proposal, please do raise them on the ASO Review Working Group mailing list soon. While there was a suggested deadline of two weeks to propose any alternative to the two council ASO strawman proposal, this doesn’t mean that the discussions will close by then. There is still much left to agree and details to refine, particularly when we start receiving feedback from other RIRs.

I welcome all members of the community to participate in the “wg-aso-review” mailing list, and take part of the discussion and consensus process.