Ruru is named after the Morepork, a small owl commonly referred to as a ruru in New Zealand.

While there are many network monitoring systems in use, they usually provide coarse measurements that only report metrics and do not infer individual user-perceived performance, for example, port statistics.

Other monitoring approaches, including PerfSONAR, operate with synthetic, generated traffic and only provide measurements between a set of hosts that can be far away from actual end users. Therefore, these approaches also cannot provide appropriate insights into traffic dynamics over short timescales for events such as flow-level micro-congestion or sudden latency changes.

In order to understand the nature of latency over the Internet, Ruru was born – a realtime, passive monitoring system developed in collaboration with REANNZ, New Zealand’s Research and Education Network provider.

Ruru also maps source and destination IP addresses to geographical locations as well as to Autonomous System Numbers (ASNs), and visualizes these measurements in high speed on a 3D WebGL-enabled map interface. Moreover, Ruru aggregates statistics by source and destination locations as well as ASNs, and allows a realtime understanding of wide-area latencies.

Figure 1: Ruru measures the elapsed time between SYN, SYN-ACK and the first ACK TCP packets for all TCP streams.

Since December 2016, Ruru has been deployed on a Dell PowerEdge commodity server, physically tapping a 10Gbit/s international link carrying real user traffic between Auckland (NZ) and Los Angeles (USA) — this link is one of REANNZ’s two international commodity links out of NZ.

While in operation, Ruru has been used for detecting anomalies and was able to find very fine-grained micro-glitches in latency that no other monitoring system had previously identified. For example, we have found that a periodic firewall update was causing a 4,000 ms latency increase on all connections that were started within a specific, very short time period each night. This 4,000 ms increase had not been noticed by conventional measurement tools (SNMP polls), however, it was clearly shown in our Grafana UI. Other types of anomalies, including unusual number of TCP connections between two locations or SYN floods, can also be identified in realtime with simple Ruru modules.

Ruru can also be used to visually alert operators to latency anomalies. By inspecting the live 3D-map, operators can observe how the colour of the arcs changes between certain locations (as shown below). 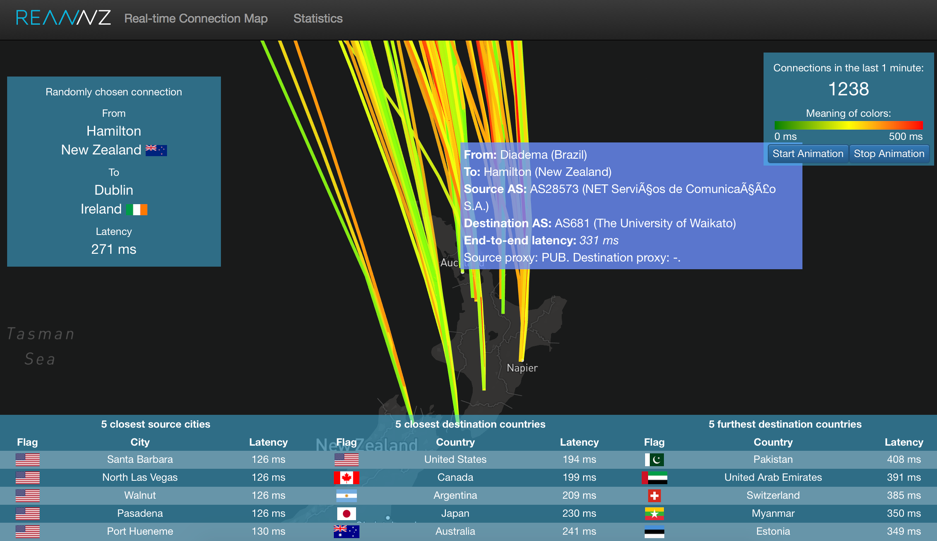 Figure 3: Ruru map showing traffic source and destination. The colours represent the RTT: red lines in areas where most lines are green show increased latency for some connections. Operators can hover on any link and see the details.

Ruru is entirely open source and easy to deploy: https://github.com/REANNZ/ruru

Richard Cziva is a PhD candidate from the Networked System Research Lab of the University of Glasgow.