Pushing through the market square, so many mothers sighing
News had just come over, we had five years left to cry in
— Five Years, David Bowie

You could definitely apply the David Bowie song Five Years (it’s the first track on the Ziggy Stardust album) to the rollercoaster ride that has been IPv6. How can something so simple have taken so long to get to this point?

The answer is — of course — human perversity in the face of rational expectations. IPv6 has been a long time coming precisely because IPv4 is such a success, and the cost and consequences of moving to IPv6 have been so uncertain.

But, let’s not get swallowed up in doom and gloom. How has the past five years gone, and where might we be going? The answer is, that the past five years of worldwide deployment have been in many ways a remarkably consistent track, which (thank goodness) is “up and to the right”.

The qualities of this deployment seem to me (at least) to best fit a logistic supply curve. Why? Because the economics application is often to model the rate of uptake of innovation, where we know it starts low (or zero) and it winds up hopefully at 100%, but it can’t go on forever — there is a foreseeable endpoint that might not be approached. The early days are slow, then things hit a critical mass and it seems to explode into action, and then things tail off again as the market saturates.

We’ve seen this curve across the history of technology worldwide. The rate of adoption of cars, replacing horses. Radio. Telephones. Washing machines and microwave ovens. Interestingly, the ‘slope’ of the curve appears to be shortening as time goes on: it’s as if we learn the benefits of a new technology ‘quicker’ and pile on board faster. 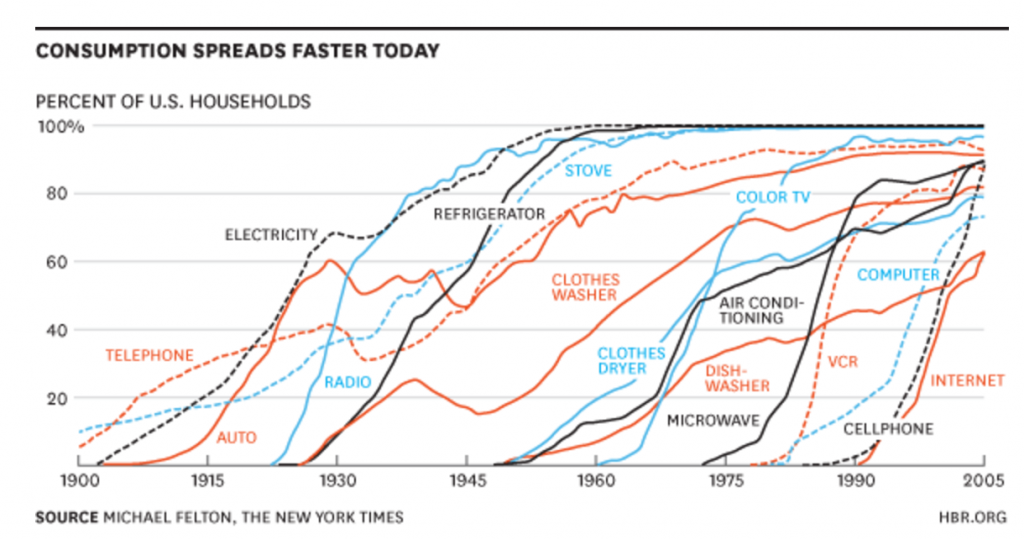 From Harvard Business Review out of the NY Times: https://hbr.org/2013/11/the-pace-of-technology-adoption-is-speeding-up

I took this model, and applied a Python3 curve fitting library to a sigmoid function (logistic curves are a subset of sigmoids) and came up with this fit. I’ve put the five year window, and the next five years, onto the plot. 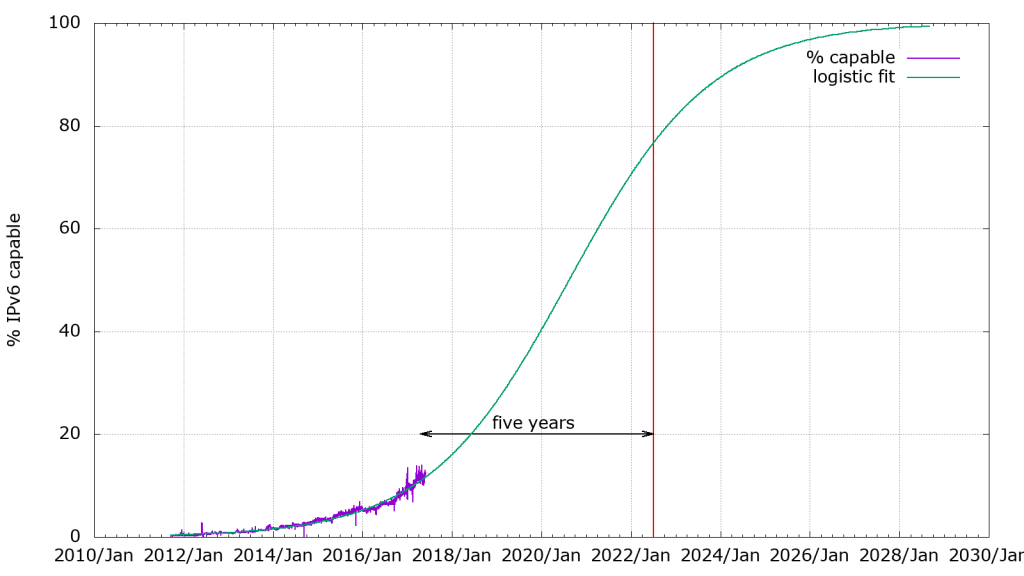 A rough fit of the logistic supply curve (via a sigmoid function) to the IPv6 world capability data, projected forward.

The first thing to observe about this graph, is that it is highly speculative. It’s a curve fit to a logistic function, and because of the high variance in the recent IPv6 capability figures worldwide, its actual trajectory is capable of being either much sharper or (more likely) much flatter. The further out in time you go, the more unlikely this curve fit is. But that’s ok; it’s fun to project out, and we can hope to see, in five years’ time, how we did against this prediction. It says (in effect) that in the next five years, if IPv6 uptake continues as it has, we will be somewhere around 80% IPv6 capable worldwide.

The second thing to observe is that if we look inside economies with higher IPv6 uptake, we see one of at least two situations: Either there is a viable (or emerging) competitive market, or there is a single player who has ‘moved’ into IPv6. An example of the former is the US economy, with at least five highly-placed ISPs competing in IPv6. 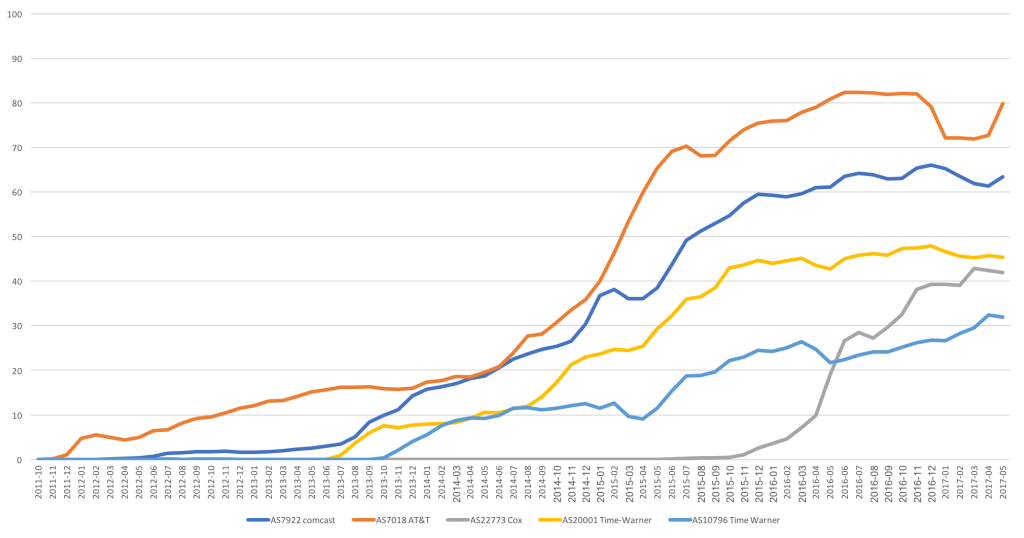 The IPv6 capability of five US ISPs from the top-top by random sample in APNIC Labs measurements.

Notice how the rate and peak of deployment varies in each case. However, there does appear to be ongoing competitive presence in IPv6 from these providers. Compare the US situation to the UK. In this market, three ISPs appear dominant in the sample: NTL (Virgin Media), Sky and British Telecom (BT). Additionally, a large academic network (JANET) is shown. Of the three market-dominant ISPs, only one has made a significant move and has clearly reached its natural limit. One appears completely disinterested in competing, and one has just begun. The JANET networks shows an example of deployment that appears to peak before it reaches the natural limit. This may be a function of campus policy, filtering, or budget constraints. Compared with the US, there is little or no visible sign of a cohesive move to IPv6. 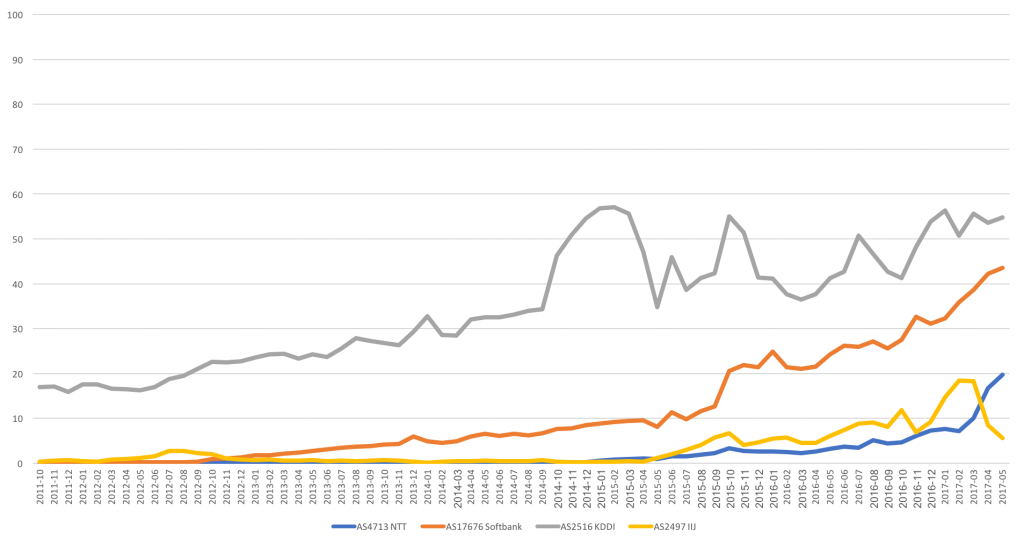 The appearance of NTT in global IPv6 measurement is very recent

The history of deployment of  IPv6 in Japan is good, in as much as they started early. There were strong signs of uptake back in 2011 from KDDI, which was a significant early adopter. But, constraints on their ability to deploy to a significant portion of the market have limited their reach. It’s not been explosive growth, it’s been a long, slow, steady increase.

This is due to one thing, which is the one notable absence in this set of ISPs until recently. That’s NTT. Due to architectural choices, NTT was not globally visible in IPv6 although they have had a large internal network using IPv6 to provide ‘triple play’ services on their domestic fibre market share. Because of that architecture, and the role of NTT in providing infrastructure to other ISPs (like KDDI), the reach of those ISPs was strictly limited.

What is missing in this diagram is the extent to which NTT is a dominant market player in this segment. However, what you can see is that they have clearly made some changes recently because there is the beginning of a very steep (rapid) uptake of global IPv6 capability showing in the past two months, primarily from OCN NTT (the decline in visible IPv6 by IIJ is probably a temporary thing, or a measurement effect).

Let’s look at some other markets in the Asia-Pacific. Here are Malaysia and Vietnam: 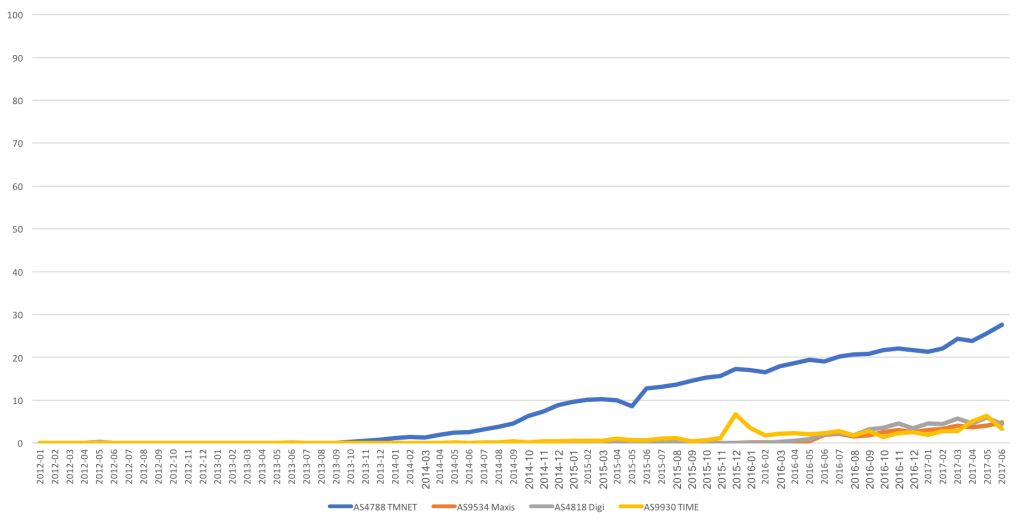 Signs of competition in IPv6 emerging in Malaysia (above) and Vietnam (below). 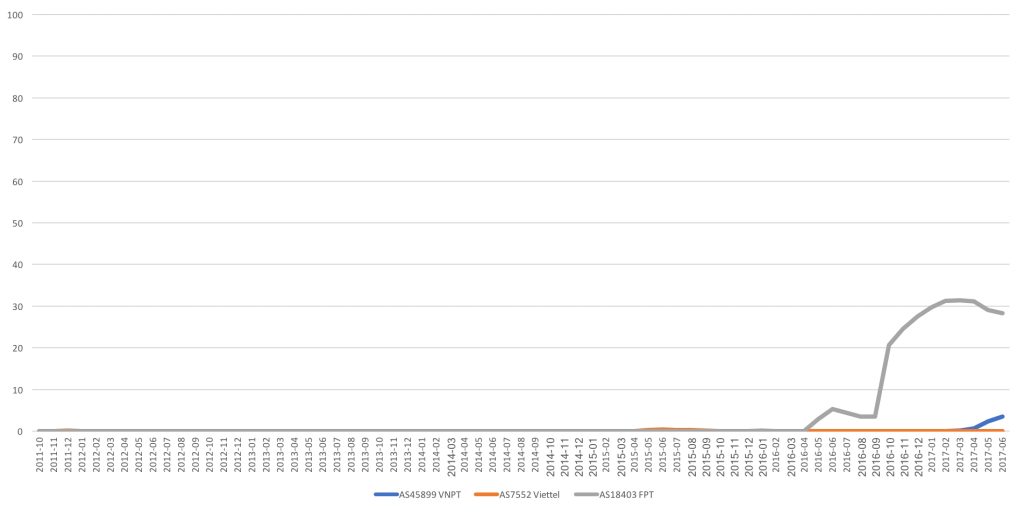 These are two examples of emerging IPv6, one long-term (TMNet in Malaysia started their deployment back in 2013) and one comparatively recent (FTP in Vietnam appears to have deployed as recently as 2016). Both deployments show signs of competition emerging in other ISPs, albeit slowly. And FPT shows signs of reaching a (hopefully temporary) logistical peak, perhaps as a function of technology.

What these different economies show us is that there isn’t one story to the IPv6 deployment timeline — it can be rapid or slow, it can be interrupted or it can be continuous. And, that the pace of deployment worldwide as an apparently smooth curve in a logistic function masks a huge variety of peaks and troughs, a function of local market conditions.

But what stands out is that across all kinds of Internet economies, IPv6 deployment is real. This isn’t some test flight, this is taking place in the public network, and it’s got a trend line we’re all familiar with: Up and to the Right.