With the New Year well underway, we’ve asked some members of the Asia-Pacific numbering community to reflect on 2015 and also gaze into the crystal ball to predict what may be in store for the Internet in 2016.

Here’s what our respondents said. Do you agree? Join the discussion in the comments section below.

What will you remember most about the Internet in 2015?

Speculation on what the Internet will look like in the near future with the Internet of Things (IoT) and cloud computing. It was really interesting and, as a security professional, everybody has to prepare for the potential threats.

Development of the IANA Stewardship Transition proposal, covering all three IANA functions. While the framework of stewardship differs per function under the transition proposal, what is common is that the direct customers and the communities responsible for developing standards/policies for those resources will have direct involvement in the stewardship of those respective functions. For the number resources related function of the IANA, it will be the RIRs and their communities who will be the steward of its function. This makes the post-transition stewardship to be more consistent with the bottom up spirit and how we have been developing policies for the resources.

The proposal is also a concrete example of how different existing communities, including the IETF, the ICANN, the RIRs can work together and reach consensus and produce a concrete outcome of collaboration in the form of a proposal.

The fact that it was EVERYWHERE.  Everything has a website, email address, hashtag. In New Zealand over 85% of people have access to the Internet, we’re working hard with the public and private sector to get this to as close to 100% as soon as we can.

In 2015, many Chinese Internet companies integrated with each other, such as 滴滴快车 (di di kuai che), 58 and 赶集网 (gan ji wang). It indicates the market is becoming more mature, with companies needing to integrate resources to get rid of unnecessary competition.

It’s very easy to say that 2015 was the year that video-streaming services came into their own. Countries outside of the USA and Western Europe finally got access to libraries of big content providers. Netflix is still localizing its services but for those able to use English most of the world is now able to access huge quantities of higher quality video on demand.

On a personal level, I will remember two things: the 2015 Internet Governance Forum in Brazil with the many issues and amazing contributions from the community both in person and online. It is incredible that we can have such engaging events with the Internet extending the real world access in such a meaningful way right across the globe. The other memory will be our collective effort to transition IANA away from US government sole oversight to the community.

The most important thing I remember from 2015 was getting an opportunity to be an APNIC 40 fellowship recipient. It was a great opportunity to learn about the trends of Information Technology around the globe and to be a part of the Asia Pacific community for a good cause.

The explosive growth of Internet users here in Pakistan due to the 3G and 4G spectrum auction in 2015. Also the breakdown of SEA-ME-WE 4 [submarine cable] twice, which crippled Internet speeds.

What I remember the most is the landscape changes in the cloud computing market. Those big cloud players continued on the race with more tech innovation and ecosystem refinement.

Three issues I remember most about the Internet in 2015:

‘Internet Plus’ was a hot topic in China in 2015. It means the interaction of Internet (online) and the real economy (offline), and it will promote the transformation and upgrading of the latter.

What do you think will be the big issue facing the Internet in the Asia-Pacific in 2016?

In 2016, the big issues I can see in APAC especially in South Asia are Internet security and net neutrality. From experience and incidents in the last year, governments are now really keen to control the Internet, in terms of national security. Most governments are spending huge resources to monitor and control Internet content, eventually breaking services and creating huge impact on user experience.

Access. How do we accommodate growing numbers of Internet users in our region in terms of providing physical connectivity and accessibility to services?

Further, how do we accommodate growth of the Internet in our region with the existing available IPv4 pool and slow transition to IPv6?

Piracy and intellectual property rights/laws. There is still a lot to be done in this field by all of stakeholders in this region.

For the traditional equipment vendors and telecom operators, how to reform the way in which businesses work is a big issue; in order to survive or keep income increase while coping with the impact of large Internet companies such as Google and Alibaba.

Security and trust.  We’ve had a lot of revelations over the last year which have shaken peoples trust in their security and privacy as they use the Internet.  We need to work harder to build this back. It’s not a job for one person or government, it’s something that we all need to take responsibility for. 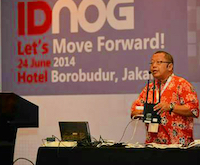 For the Asia Pacific, the picture would be different. I would guess a more equal e-commerce / trading traffic would be one of the big issues. It can be trading of goods, knowledge, etc.

Cyber warfare and APTs. Now countries have found cyber attacks are more effective that traditional weapons. APTs will also help cyber warfare as it can be the preparatory phase for such attacks. Countries are now discovering many APT type attacks have been in their system for years. Still it is not possible to estimate or find how many of our systems are already under this threat.

For Bhutan, it is important to have a stable, easy, cheap and reliable source of Internet due to geographical terrain. Other important issues are: campaigning and educating the public for use of social media meaningfully as a nation, and changing to cloud based technology.

The big challenge would be the collaboration between government and other stakeholders about Internet governance especially for identification and mitigation of cybersecurity threat. It’s also important to build awareness and identify collaboration of information sharing by respecting freedom of speech and privacy.

On the upside, I’m hoping it will be the enjoyment people receive from all of this good new content however, I suspect it will be the conflict between all this new demand from on-demand video and how providers deal with it. Consumers don’t want to face big increases in fees and they don’t want to lose access to other services if providers opt to throttle traffic in response. The net neutrality issue is likely to raise its head even more.

Augmented reality and virtual reality will be developed and more new big data companies will be created.

What do you think is the biggest opportunity or challenge facing the Internet numbering community in 2016?

IPv6! I have been asking Indonesian ISPs for IPv6 but most of them don’t have their network ready 🙁

I current have to tunnel my home IPv6 network to an ISP in Singapore.

The maturing IoT market elicits a great opportunity of accelerating the adoption of IPv6.

There is increasing interest for the IoT by non-technical people and IPv6 is often associated with it. It is important that we are able to share an accurate understanding of IPv6 deployment to those outside the community.

The biggest challenge will be how the Internet numbering communities collaboratively work on common cybersecurity framework especially for securing IP routing, DNS and whois database management as well as IPv6 adoption into end level.

The biggest opportunity will be how the Internet number community work with IoT and CERTs.

How to effectively allocate address resource for the massive terminals applying in the IoT, mobile Internet, etc.

As IoT is developing, more and more IPs are consumed by new equipment, which will push IPv6 to be applicable in the developing areas, such as China.

Letting go of our unhealthy obsession with IPv4. There are so many reasons organizations use to explain why their IPv6 adoption plans are slower than expected or stalled. With some of the largest networks and content providers globally fully supporting IPv6 now, these reasons just look like excuses.

I suspect the biggest issue will be tracking IP addresses in use for the increasing demands of both law enforcement and trouble shooting. With IPv4 depleted some people are implementing weird (and not necessarily ethical) approaches to reuse IPv4 addresses, including ones not necessarily allocated to them. It will therefore get harder and harder to figure out where addresses are actually in use.

In Australia in 2015 a system of metadata retention was imposed on ISPs, which includes tracking of IPv4 addresses allocated to customers. I can see this getting very complex for operators generally and other governments will want to follow suit.

Clearly I’m either in denial or delusional about the IANA transition being a non-issue as it sails straight through to the community in 2016!

Implementation of IPv6. Because most of the service provides are still not fully prepared for the change.

IPv6. I think IPv6 deployment, especially for Bhutan, is associated with customer’s willingness to migrate to IPv6. Nevertheless, being an ISP we need to upgrade to the newest technology and should be to the expectation of the globe and helping the community to have easy access to the Internet .

IPv6 adoption, still! ISPs and businesses are still not responding to the urgency of IPv4 address depletion.

IPv6 adoption for eyeball networks could be the biggest opportunity or challenge for the Internet numbering community in 2016. Both major contents and Internet backbone has been ready with IPv6 for quite some time. But it’s the last mile access networks need to address with IPv6.

What do you think 2016 holds? Add your comment below!