Let’s go step-by-step and do some basic live process forensics for Linux. Today’s attack is a bind shell backdoor waiting for a connection on Ubuntu.

If you want to simulate the attack in this post, you can use the netcat command, which opens a TCP port on 31337 but sends all data to /dev/null instead of a real shell. The commands below delete the binary as well after it starts so you can experiment with recovering the deleted process binary.

In our example we saw something odd when we ran:

netstat shows a process named ‘x7′ PID with a listening port that we don’t recognize.

The first thing we’ll do is list out the Process ID (PID) under /proc/<PID> to see what is going on. Our PID of interest is 5805:

Below we see a couple of odd things.

A lot of exploits work out of /tmp and /dev/shm on Linux. These are both world writable directories on almost all Linux systems and many malware and exploits will drop their payloads there to run. A process that is making its home in /tmp or /dev/shm is suspicious. 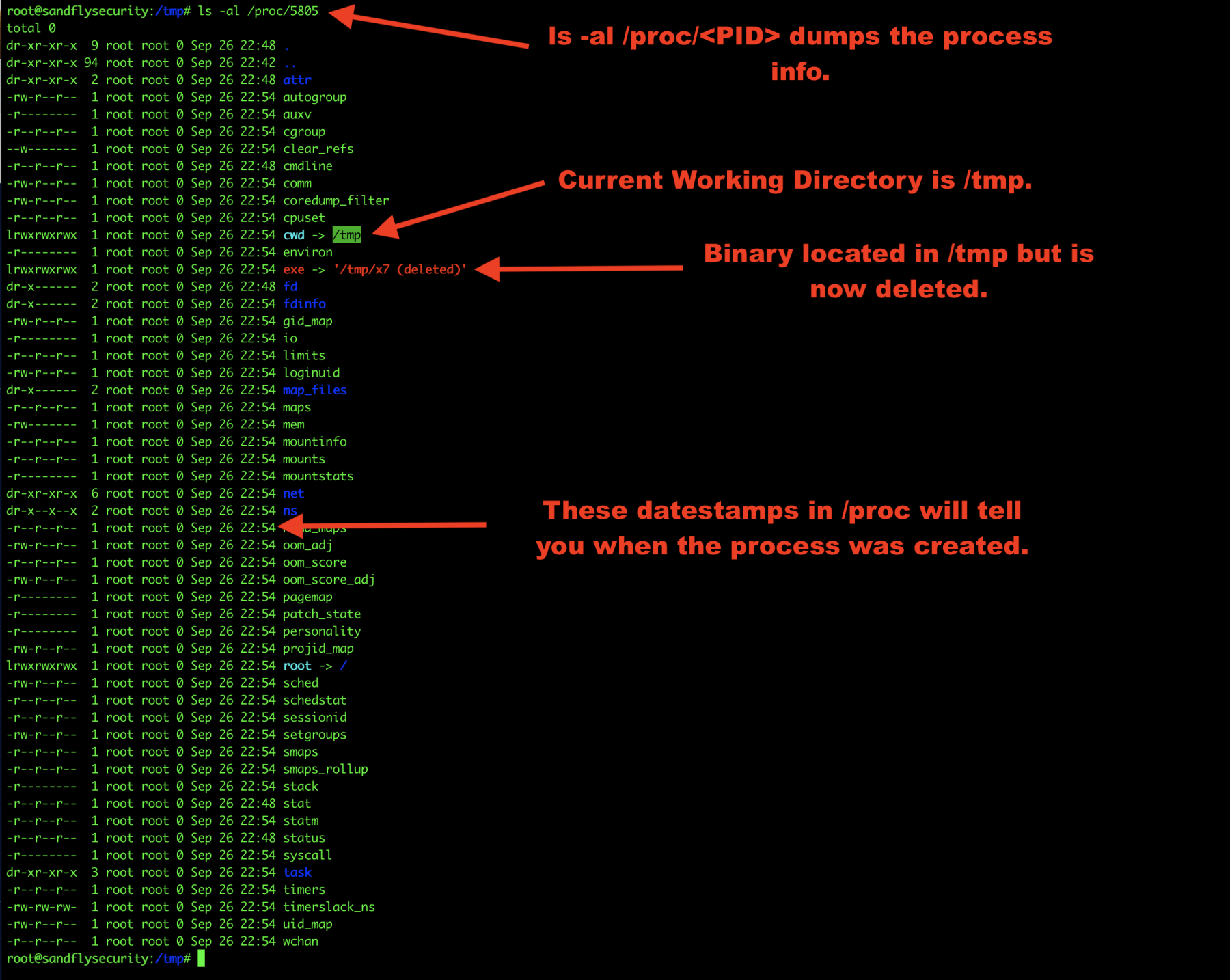 Before we do anything else, we’ll recover the deleted binary. As long as the process is still running, it is very easy to recover a deleted process binary on Linux:

Now that we’ve saved the Linux binary somewhere off the system, we can recover the hashes easily.

If you are using netcat to simulate the attack, you can recover the deleted binary and run a hash on the system netcat command and the recovered binary and see they match. 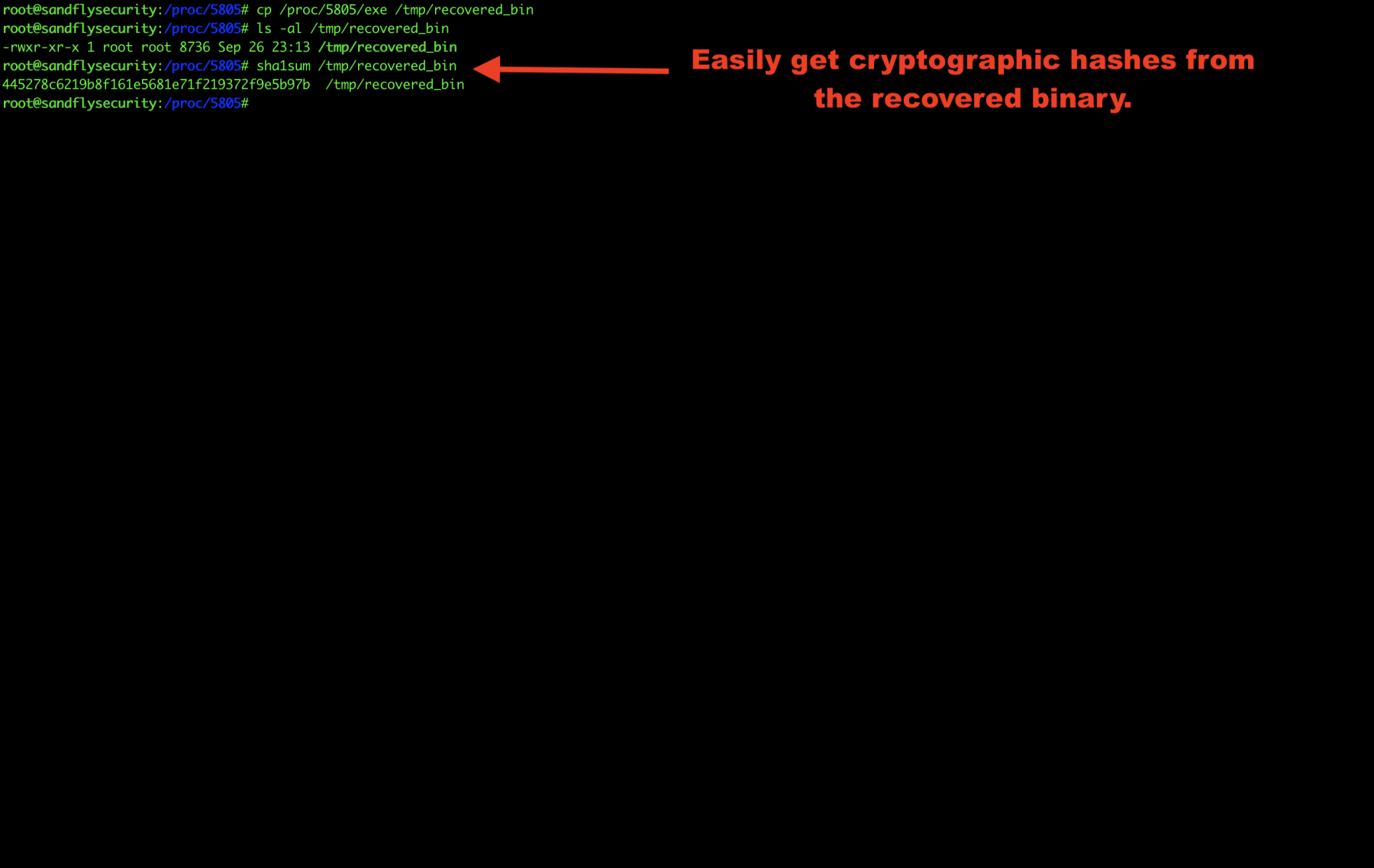 Some malware will cloak this data to masquerade as another process. You may see different names for the program in this case or even names that are trying to hide as something else like apache or sshd.

If you see multiple different names, then it is very likely the program is malicious. 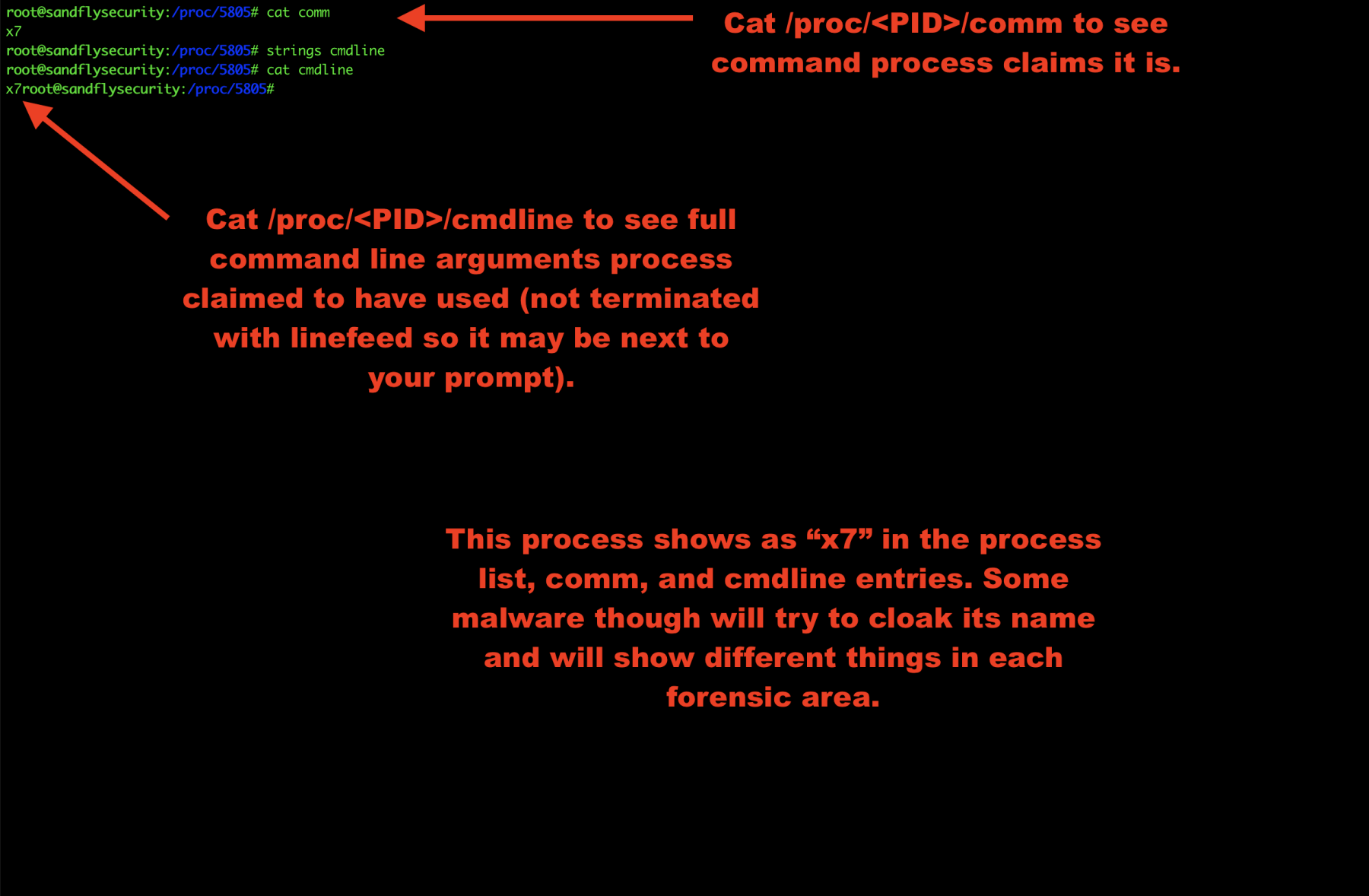 Now let’s take a look at the environment our malware inherited when it started. This can often reveal information about who or what started the process. Here we see the process was started with sudo by another user: 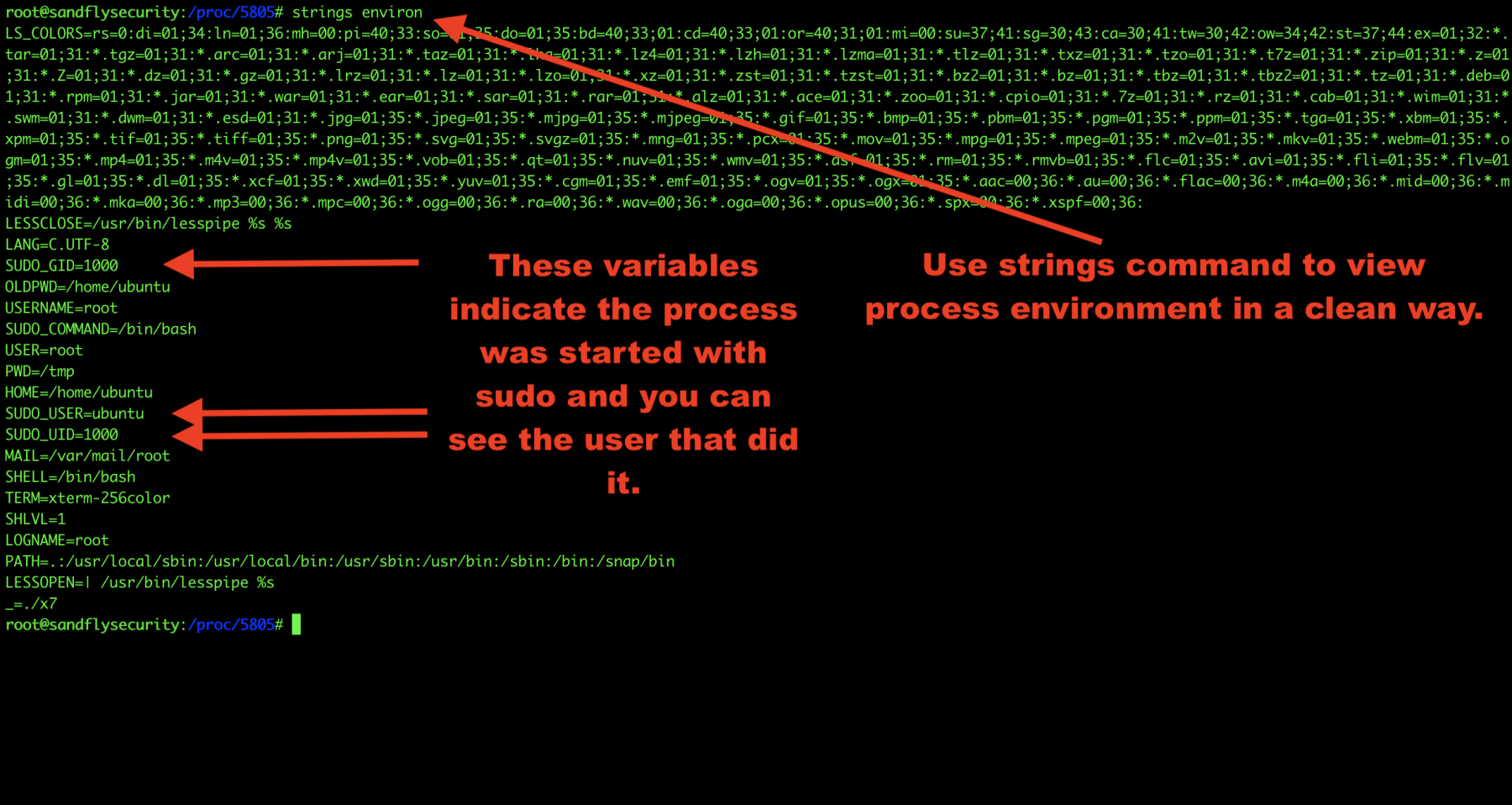 We’ll now investigate the file descriptors the malware has open. This can often show you hidden files and directories that the malware is using to stash things along with open sockets:

Another area to look into is the Linux process maps. This shows libraries the malware is using and again can show links to malicious files it is using as well.

The /proc/<PID>/stack area can sometimes reveal more details. We’ll look at that like this:

In this case, we see some network accept() calls indicating this is a network server waiting for a connection. Sometimes there won’t be anything obvious here, but sometimes there is. It just depends on what the process is doing so it’s best to look. 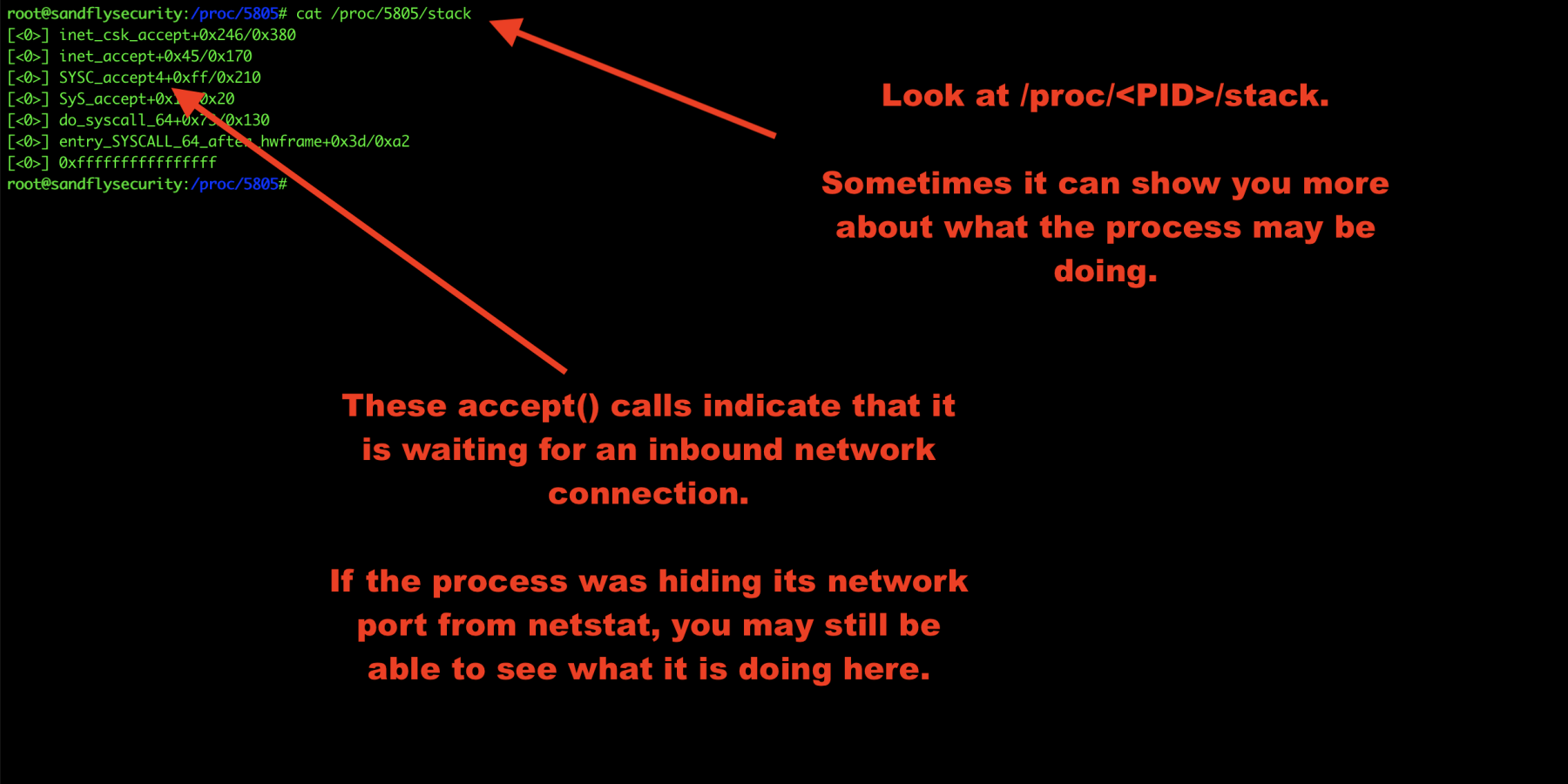 Finally, let’s look at /proc/<PID>/status for overall process details. This can reveal parent PIDs and so forth. 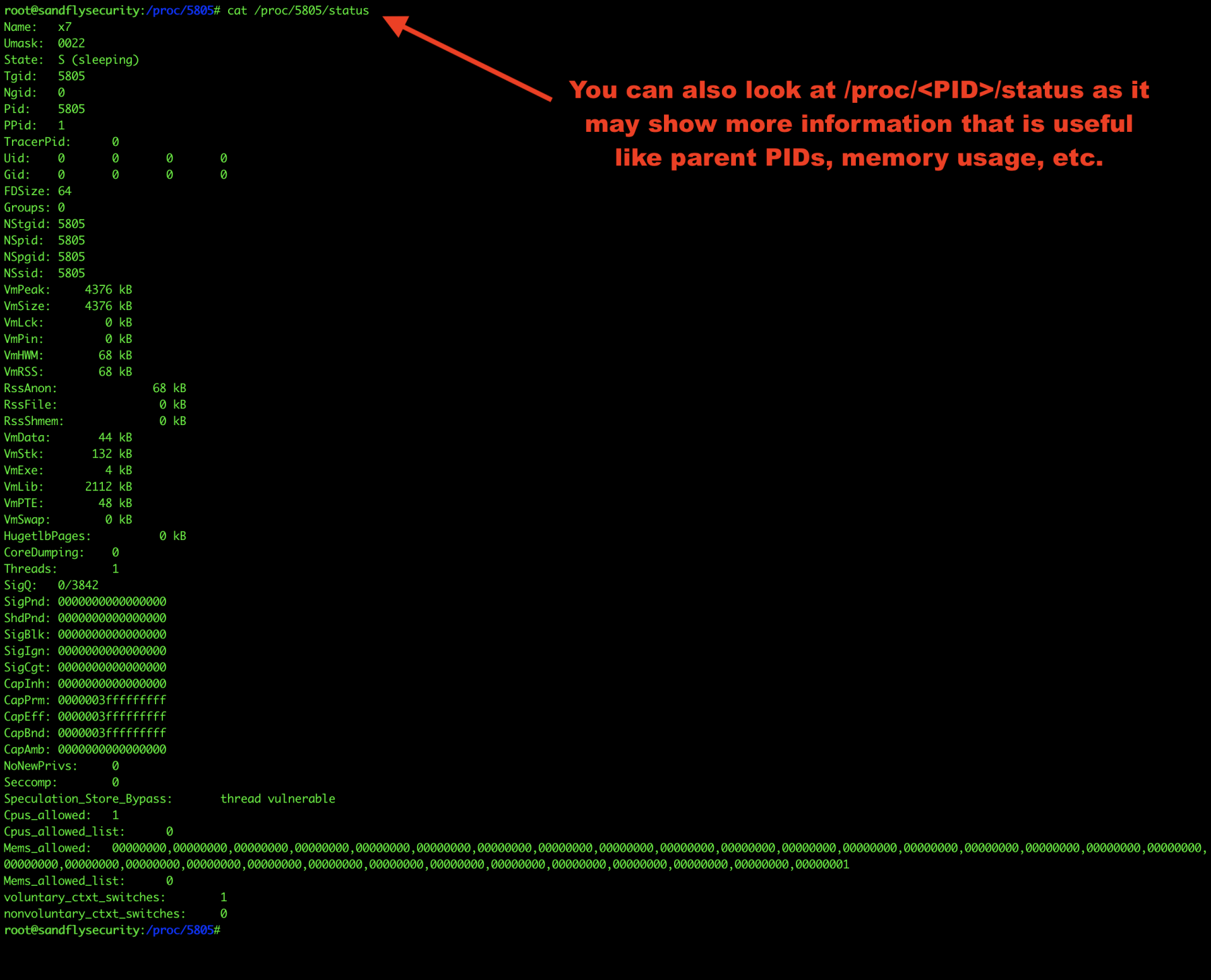 Those are some basics of Linux live process analysis. The big thing is this:

Don’t kill a suspicious process until you have investigated what it is doing.

If you kill a suspicious process out of panic, then you can lose and destroy a lot of useful information. We have created a Linux command line cheat sheet to help you look for these and other artifacts here:

Adapted from original post which appeared on Sandfly Security.

Craig Rowland is Founder and CEO of Sandfly Security.