There have been a number of research papers that have described effective DNS cache poisoning attacks using IP fragmentation. The concept was first presented by Amir Herzberg and Haya Shulman in Fragmentation Considered Poisonous in 2012, and then by Tomas Hlavacek in IP fragmentation attacks on DNS, at the RIPE 67 meeting in 2013.

A new paper, published in 2018 by Markus Brandt et al, Domain Validation++ For MitM-Resilient PKI, adds to the growing list of literature by describing how the group poisoned the full-service resolvers of several Certificate Authorities and successfully issued some certificates. The attack comprised two separate attacks. One was to the path MTU discovery, and the other was a DNS cache poisoning using IP fragmentation.

In this post, I will explain how these two attacks work and discuss the effectiveness of available countermeasures.

The above papers all showed that some implementations accept ICMP ‘fragmentation needed and DF set’ with small MTU values (less than 576 octets) and record specified values as path MTU values. Path MTU value can be decreased to 552 octets on Linux (3.13 or older) and may be decreased to 296 octets or lower on some servers (as described in ‘Domain Validation++ For MitM-Resilient PKI’).

In order to evaluate attacks to path MTU discovery, I wrote a small Perl program that generated crafted ICMP/ICMPv6 packets. 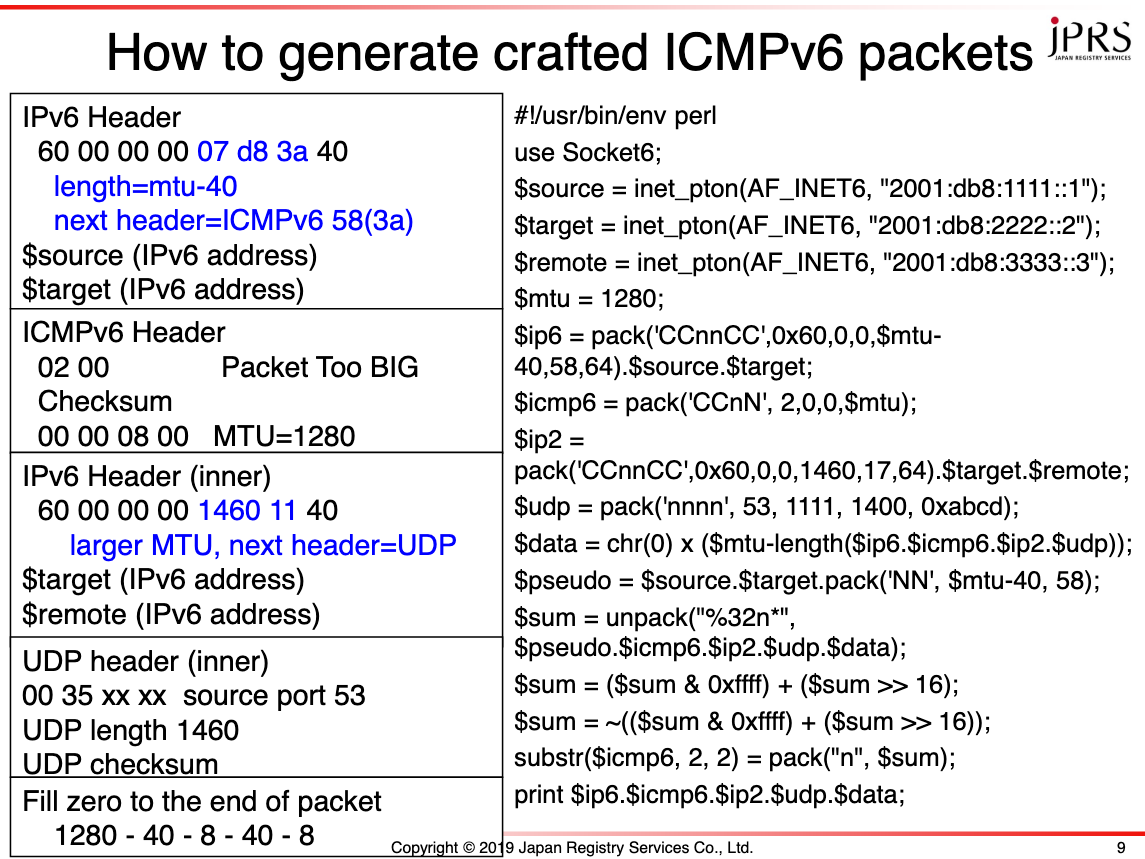 To evaluate the effect of the ICMP attacks, the ‘attacker’ would send crafted ICMP/ICMPv6 packets to the ‘victim servers’, then verify the result on the victim servers by using the following commands:

The experiment showed that:

I also evaluated Linux 4.18.20, and checked the NetBSD source code — the results of the ICMP attack are as follows:

The experiment showed that:

The keys of the attack are:

The probability of spoofing a resolver is described in Section 7.2 of RFC 5452. The DNS cache poisoning attack using IP fragmentation changes to P=1 and I=1 (source port and ID are in the first fragment and need not be predicted), and adds the number of fragment IDs as a denominator.

On IPv6, the attack does not change the probability because the IPv6 fragment ID field has 32 bits.

There are a number of countermeasures that claim they are effective against cache poisoning attacks using IP fragmentation. These include:

There is an exception though: if authoritative servers are located on a network with a small MTU (smaller than 1280 octets), setting the EDNS0 responder’s maximum payload size fit to the MTU value or name resolution sometimes fails.

Under normal conditions, the EDNS0 requestor’s payload size is decreased to 1220. Some of the queries may be truncated and need to be retried using TCP. Otherwise, there are no performance problems. Under path MTU attacks, responses are fragmented and name resolution fails.

With regard to the former, to drop fragmented UDP responses related to the DNS, drop the UDP fragments before reassembling in stateful inspection. For example, on Linux, drop the first fragment, which is UDP source port 53.

Or, drop the first fragment, which is UDP source port 53.

On FreeBSD, drop the second fragment, which is UDP.

To evaluate the current status of popular domain names, I sent DNS queries to Alexa’s top 1M names (the name itself and prepended with “www.”, using qtype A and AAAA) using Unbound 1.8.3 with edns-buffer-size,max-udp-size 4096 or 1220, v4 only, DNSSEC validation enabled, and captured packets between full-service resolvers and authoritative servers.

(QueryGenerator retries queries once when there are errors)

Unbound, using EDNS0 size 4096 received 64,334 fragmented and 16,736,365 total responses. Around 2,438 IPv4 addresses sent fragmented responses. I assumed that the maximum packet size from each address was the path MTU size.

Upon evaluation, I found a strange behaviour related to the EDNS0 payload size. Eleven addresses ignored the EDNS0 requestor’s UDP payload size of 1220 octets and sent 1500 octet packets with fragments. These addresses may have problems with my proposal (EDNS0 size 1220 octets and drop fragmentation) because they ignore the EDNS0 size and generate fragments. This abnormality violates the EDNS protocol, and we need to fix it. Some of these strange addresses were fixed after OARC 30 presentation (May 12, 2019).

Path MTU discovery is vulnerable and fragmentation may cause protocol weakness. DNS cache poisoning attacks using IPv4 fragmentation are possible if authoritative servers run on old Linux systems. However, avoiding IP fragmentation at full-service resolvers is possible and there are countermeasures against such attacks.

Kazunori Fujiwara is a Senior Researcher at the Japan Registry Services Co., Ltd.