China Telecom then announced these routes onto the global Internet redirecting large amounts of Internet traffic destined for some of the largest European mobile networks through China Telecom’s network. Some of the most impacted European networks included Swisscom (AS3303) of Switzerland, KPN (AS1136) of the Netherlands, and Bouygues Telecom (AS5410) and Numericable-SFR (AS21502) of France.

Often routing incidents like this only last for a few minutes, but in this case, many of the leaked routes in this incident were in circulation for over two hours. In addition, numerous leaked routes were more-specifics of routed prefixes, suggesting the use of route optimizers or similar technology.

If someone thought the prepending of AS21217 would keep these routes from leaking out, they were mistaken. Below is a visualization of the propagation profile of a prefix (46.145.0.0/16) announced by Dutch carrier KPN. 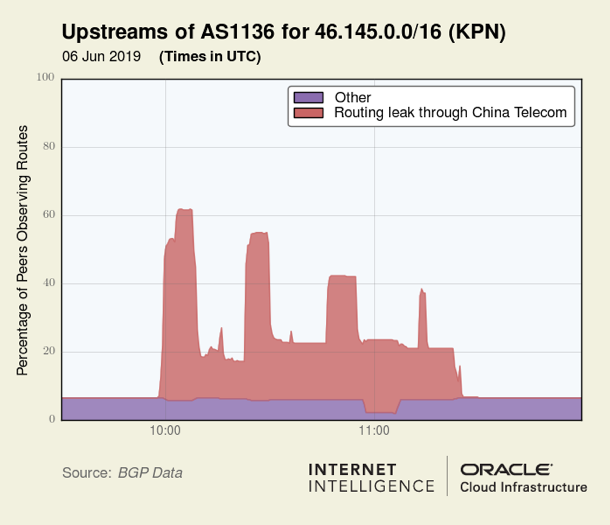 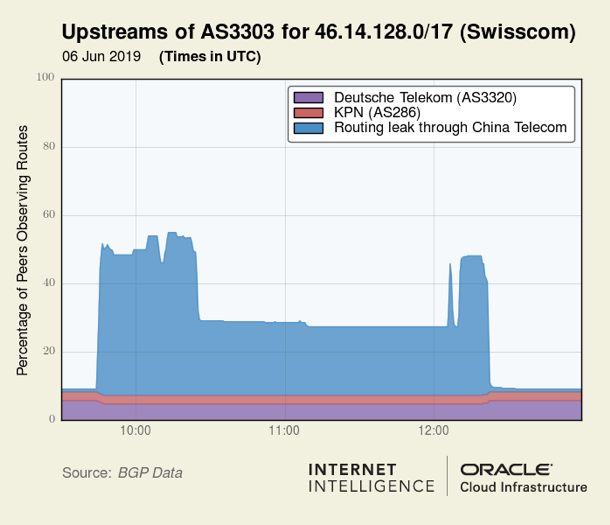 Each of these plots depicts peaks and valleys in the spread of propagation over time. These ‘features’ are caused by changes in how China Telecom exported these routes to Tier-1 telecoms during the leak. Below we can see the preceding graphics side-by-side with equivalent views from the upstream perspective of AS4134. 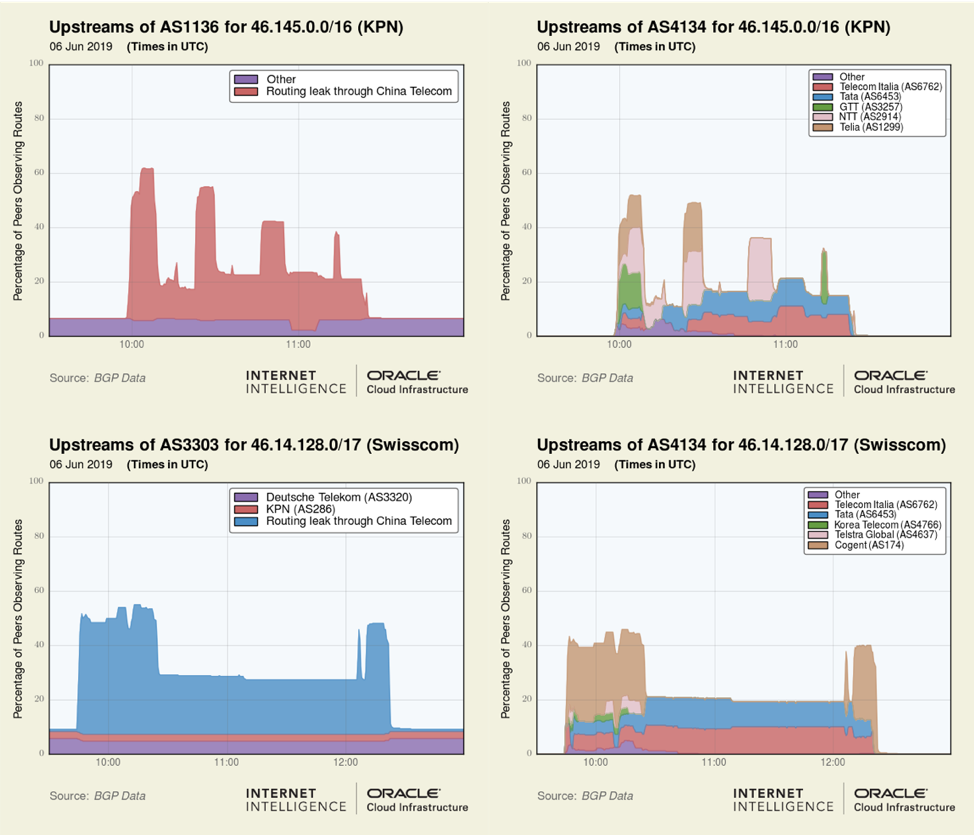 Users of these services began noticing problems and reported seeing traceroutes to their networks traversing China:

@Swisscom_B2B_en Are you having routing problems? We have a hard time reaching multiple servers. BGP Hijack ? https://t.co/0EcyQAzP8s ?

Many of our traceroute measurements were also sucked into this routing leak. The traceroute below begins in Google in Ashburn, USA, and is destined for Vienna, Austria, but is detoured through China Telecom (hops 5-8) en route to its destination.

Below is another traceroute from an Oracle data centre in Toronto to Numericable-SFR in France that gets diverted through China Telecom (hops 8-10).

Today’s incident shows that the Internet has not yet eradicated the problem of BGP route leaks. It also reveals that China Telecom, a major International carrier, has still implemented neither the basic routing safeguards necessary both to prevent the propagation of routing leaks nor the processes and procedures necessary to detect and remediate them in a timely manner when they inevitably occur. Two hours is a long time for a routing leak of this magnitude to stay in circulation, degrading global communications.

A great place for any telecom to start improving their routing hygiene is to join the Internet Society’s Mutually Agreed Norms for Routing Security (MANRS) project.

Adapted from original post which appeared on the Oracle Blog.

Doug Madory is a Director of Internet Analysis of Oracle’s Internet Intelligence Team where he works on Internet infrastructure analysis projects.