Established by the Internet Association of Australia (IAA) in 2014, New Zealand Internet Exchange Inc (NZIX) is a member-driven organization, responsible for one of the main Internet exchanges in New Zealand: Auckland IX.

The idea of NZIX came about after Sydney-based IX members observed that the landscape in New Zealand was in dire need of attention. After a trial of Auckland IX in November 2014 it was decided that a ‘sister’ organization, NZIX, would be the best solution to run the Auckland exchange. After a successful probation period, NZIX became an entirely separate entity in 2016.

Being the ‘numbers guy’ (the Treasurer) at NZIX, APNIC asked if I could discuss our past growth and future plans, which is more challenging than it sounds. While there has been an obvious, and large, increase in traffic over our IX, we have no visibility of that traffic and have therefore, until now, not questioned its purpose.

At NZNOG 2019, IAA Technical Manager Joe Wooller presented some NZIX peer stats (see the video below). These show that over the past year our aggregate traffic has almost doubled, even though we’ve only added 16 peers (25% growth), so it’s worth some further analysis. 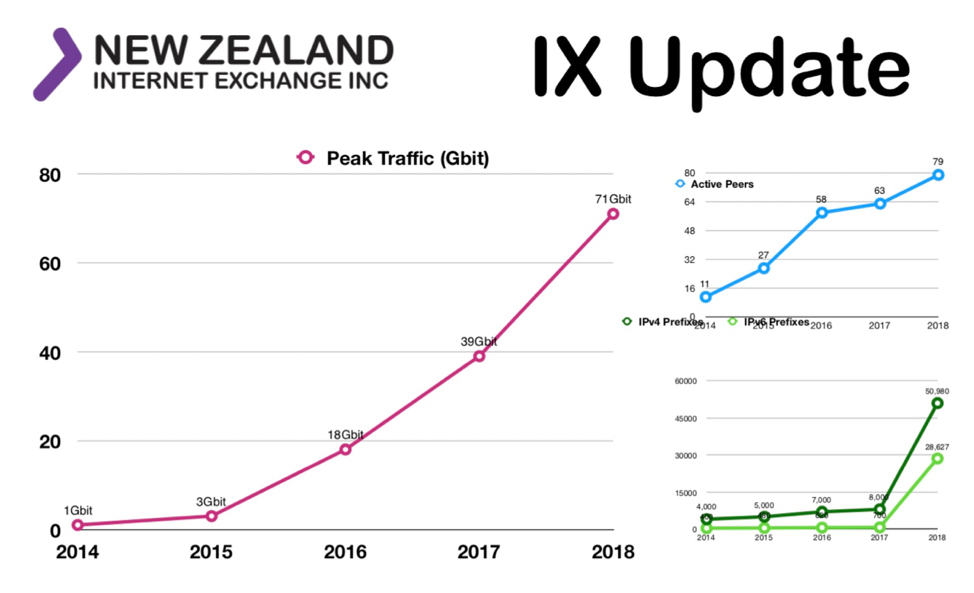 Breaking down the data

NZIX has a public metrics site where anyone can view the port traffic of our publicly viewable members. The site features an aggregate graph (Figure 2) and historical data, which is simple to navigate and interpret.

From this we can see the IX has experienced slow and steady growth — traffic wise — in the past year, with a slight seasonal dip around Christmas and the New Year.

Akamai is slow and steady growth-wise; nothing too special there.

Traffic from the Google Cache (Figure 3) gets a bit more interesting — you can see a significant increase in the second half of 2018 for that port. This can largely be explained by our member eyeball networks taking advantage of Google’s YouTube cache that’s on our IX. It’s hard to know if it’s more eyeballs watching or just higher quality content being watched — probably a bit of both.

We also potentially see some seasonal trends: there is a peak at the start of school summer holidays and then a slight dip after Christmas. One could make some assumptions about what Kiwis do over the summer period…

In September 2018 there was the addition — widely discussed on the NZNOG mailing list — of 76,000 or so prefixes to different IXs in NZ. This marked the period when Hurricane Electric came to NZ and joined NZIX.

Our members have the option to mark their ports as private — which we fully respect — so we are not able to report on specifics regarding all the traffic through the IX. However, when a new member joins our IX and advertises tens of thousands of prefixes to our other members, it’s safe to say that will generate a large amount of traffic over the IX fabric. It’s great to have a large international transit provider coming to little, ole, New Zealand.

All in all, 2018 was a year with a steady increase in content being watched or consumed, and some new peers, some of them rather large, at least prefix-wise. As an organization, we would have liked to have seen similar steady growth out of our network over the coming 12 months. However, there is one big event that will result in significant changes to our plans.

During 2019, New Zealand will partially shut down for six weeks to observe our ‘men in black’ (All Blacks) compete in the Rugby World Cup (RWC).

This year the World Cup is hosted by Japan, which is a favourable time zone and, more importantly, many key games will only be streamed by Spark Sport. The CDN being used for this is Akamai, so how quickly our eyeball network members can receive data from Akamai will be hugely important for these six weeks, while New Zealanders’ expectations weigh heavily on the shoulders of our premier rugby players.

This will be a massively important period for NZIX, as we need to ensure the majority of our members receive content from Akamai (a NZIX member) at decent speeds. We’re still crunching the numbers, however, with 6mbit streams as an option, a massive amount of households expected to be watching streams, and most of those households getting broadband from a NZIX member, the overall bandwidth increase for the RWC will be massive.

We will be working with both Akamai and Spark Sport to facilitate hardware upgrades, where possible, to try and ensure a smooth flowing RWC, at least for those data packets — we can’t do much about key games that the All Blacks play against their various long-term foes like France…

New IXPs on the horizon

We have recently surveyed our members to ask which locations they’d like to see IXPs, with  Christchurch and Wellington being among the most popular. We are looking closely at how we can make these exchanges a reality, possibly by relocating equipment retired from Auckland once our Auckland IX, rugby-induced upgrades, are complete.