Akinori Maemura was one of a group of policy trailblazers from the APNIC region that helped create the first global IPv6 policy.

This is the third post in our series, investigating how number resource policies changed the development and growth of Internet infrastructure in the APNIC region.

The authors of RFC 1287 recognized back in the early 1990s that the Internet’s future growth would exhaust the available supply of IPv4 addresses. In the RFC, ‘Towards the Future Internet Architecture’, one of the suggestions to solve this future problem was to ‘expand the address space’ of IPv4’s 4.3 billion addresses.

In 1993, the IETF formed an ‘IP: next generation’ area to solicit white papers for possible solutions to the problem, and, in December 1995, RFC 1883: Internet Protocol, Version 6 (IPv6) Specification was published as a ‘successor to IP version 4’.

But inventing the next generation protocol was only the first step.

Community members in the APNIC region could see the delegation rules for IPv6 needed to be radically different from IPv4.

They could see that the Internet numbering policy had to help create an enabling environment and lay the foundation for this paradigm shift. They also knew to be effective, the policy had to be globally adopted — something that at that point in time had never been done before.

Promotion and aggregation, rather than conservation and justifying need

The first provisional IPv6 policy — developed in 1999 collectively by APNIC, ARIN, and the RIPE NCC  — was based on the IETF’s proposed allocation boundaries.

The next year, however, several carriers in Japan started to look seriously at deploying IPv6 and it became obvious to a small number of people from JPNIC, and the IPv6 Promotion Council of Japan, that the community needed to consider how best to allocate addresses to production networks.

“IPv4 policies have always sought to conserve the limited space we’ve had. Since there are 340 trillion trillion trillion IPv6 addresses, conservation wasn’t an issue. This was a fundamental change in the approach to distributing addresses,” says Akinori Maemura, who at the time had just recently been elected to the APNIC Executive Council.

“However, the key consideration for IPv6 was aggregation: how we chop it up and distribute it so that everyone gets enough; and if they do need more they will receive an adjacent block of addresses,” he says.

Preservation and ease of allocation were equally important factors. The IPv6 interim policy employed the Host-Density ratio (RFC 3194) for the usage rate calculation. Still in use today, the HD ratio helped organizations plan the addressing of their internal backbone in a hierarchical manner.

In 2001, a group led by Takashi Arano and Kosuke Ito submitted their proposal to change the provisional policy for discussion at the 12th APNIC Open Policy Meeting in Taipei, Taiwan.

An operational IPv6 policy would only be effective if it was globally adopted — something that had never been done before.

In 2001, follow-on discussions were held at the RIPE NCC and ARIN meetings, led by JPNIC staff;  participants acknowledged the need for more detailed, complete policies.

The initial version of this Global Coordinated Policy was produced by the JPNIC IPv6 policy drafting team — consisting of Akinori, Akihiro Inomata, Kosuke Ito, Kuniaki Kondo, Takashi Arano, Tomohiro Fujisaki, and Toshiyuki Yamasaki, and reviewed by Chairs of Policy Special Interest Groups and Working Groups from APNIC, ARIN and the RIPE NCC. It took one year to get consensus from the three RIR communities.

“This was the first example of a Global Coordinated Policy that began from the APNIC region, which was a huge honour to be a part of,” says Akinori.

(Note: The Global Coordinated Policy in this reference differs from the definition of global policy  used in relation to the Address Supporting Organization (ASO). It was a common policy that was able to be changed by regional communities).

Making it easier for Members to get IPv6

Since the Global Coordinated Policy was implemented in 2002, there have been 32 IPv6 policies proposed and discussed in the APNIC region, 17 of which have been implemented.

Akinori says each successful policy has made the overall delegation process easier, which has been important for the uptake of IPv6 by APNIC Members. These policies have included:

The last of these policies, proposed by Terry Manderson and Andy Linton in 2009, led to almost 7,000 combined APNIC and National Internet Registry Members receiving the equivalent of 104 IPv6 /32s since 2010 and has contributed to the significant growth in IPv6 delegations.

Although these delegations have not all necessarily translated to deployment yet, Akinori is heartened by recent news of large-scale deployments in Australia, India, and his home country, Japan.

“The policy process made the resources easy to access. Ultimately we are now entering the era where IPv6 will come to replace IPv4.”

The introduction of the Global Coordinated Policy has made it easier for network operators to receive IPv6 allocations. In the APNIC, RIPE NCC, and ARIN regions, a step change is noticeable in IPv6 allocations from 2002 following the policy’s introduction. Subsequent policies in each region helped fuel IPv6 allocation growth further, particularly from 2008 onwards. 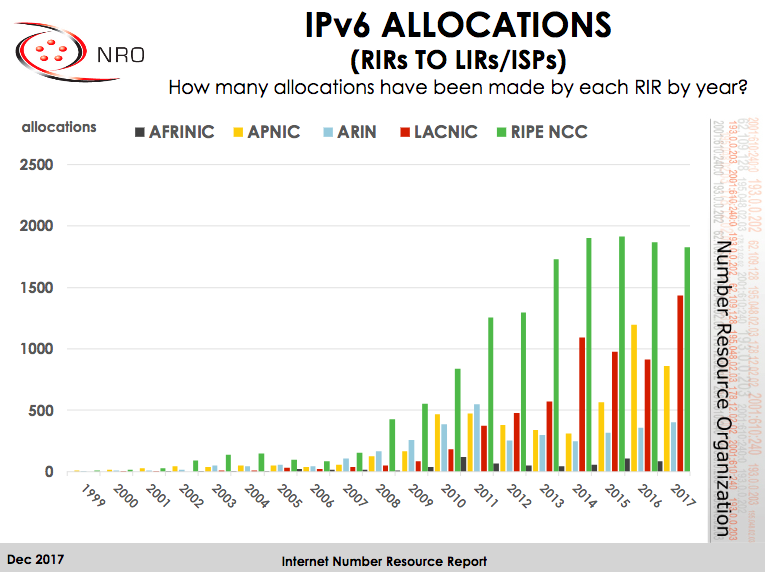 As at October 2018: IPv6 usage globally was 17% according to APNIC Labs data, with Google stating that 25% of global Internet users were accessing its site via IPv6; and more than half of APNIC Members (60%) had an IPv6 delegation. 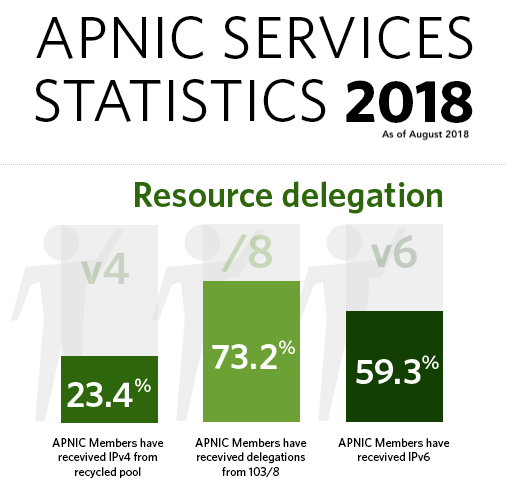 Akinori’s tips for becoming involved in the policy process