Philip Smith (pictured), Jonny Martin and Randy Bush's policy to ration the final /8 of IPv4 addresses in the Asia Pacific provided a vital soft landing in the transition to IPv6.

This is the second post in our series, investigating how number resource policies changed the development and growth of Internet infrastructure in the APNIC region.

Imagine it’s 2012. You’re a young entrepreneur with an interest in computers, whose government has just relaxed its telecommunication and trade regulations in a bid to tap into global markets.

You recognize that local businesses will need websites to sell their products overseas, so decide to set up a local hosting and data centre service. You’ll need IP addresses for your network and servers. A quick search points you to your Regional Internet Registry, where you click ‘get IP addresses’ and are confronted with only one option — IPv6.

What you’ll come to learn is that:

Something like this could have been a reality in the APNIC region if it weren’t for three wise engineers and a community that recognized the need to carefully support the transition to IPv6.

The mechanism was prop-062: Use of final /8, which specifies how APNIC allocates the last of its IPv4 addresses.

Philip Smith was one of the three network engineers who wrote and submitted the proposal in July 2008. Prior to this, staff in the APNIC Secretariat and community members started asking the very important question ‘what happens when the IANA pool becomes exhausted?’. 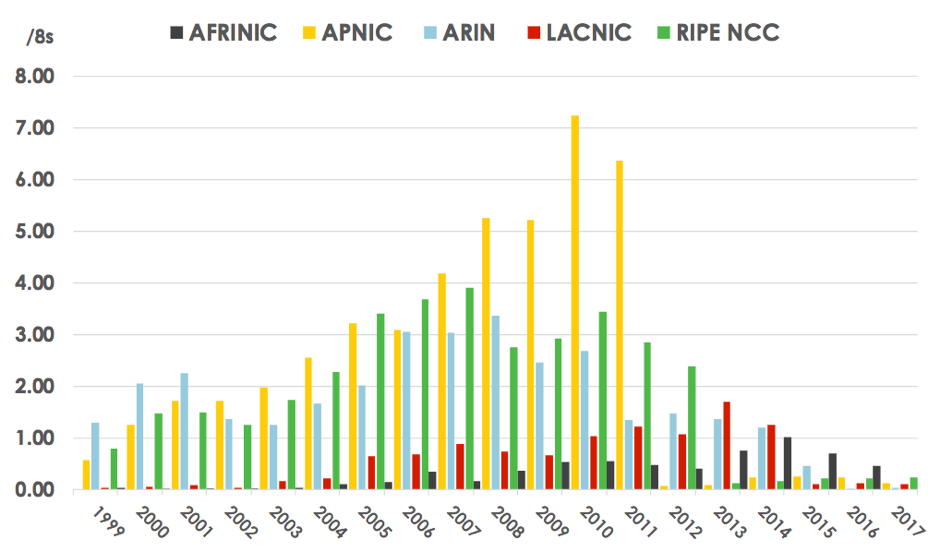 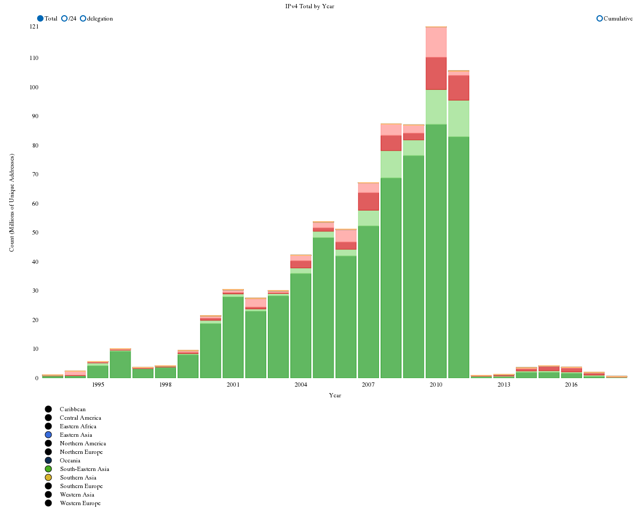 “This predated the idea of the global policy, which specified that the last five /8s in the IANA pool would be equally delegated among the five RIRs when IANA had exhausted its IPv4 addresses,” says Philip.

“So, we were like ‘okay, there are about 35 or so /8s left in the IANA pool. The RIRs could burn through those in five years at the rate they are going, which only gives us two and a half years to implement a policy’. Let’s make it happen.”

With the help of Jonny Martin and Randy Bush, Philip submitted prop-062 and presented it at the APNIC 26 Policy SIG meeting in Christchurch, New Zealand, alongside the global policy.

“There was some robust discussion on the mailing list and at the meeting, particularly about the size of allocations that organizations would receive from APNIC’s last /8 pool,” says Philip.

“We had to explain why a /22 was an appropriate maximum allocation and not a /23 or /21 — the reason being is that it would give us 16,384 /22 allocations, which would accommodate APNIC’s current and future Member needs.”

Another point of contention with the first draft — even among the authors — was the provision that organizations that applied for a final IPv4 allocation were required to also deploy IPv6 in a certain timeframe.

“I remember Randy saying ‘Why do you need to specify that in the policy. It’s obvious that a /22 is a transition mechanism’. What he meant by this was you cannot set up nor sustain a large-scale network with only 1,024 addresses (/22), so if you want to grow, you’ll need to get and use IPv6,” Philip says.

“Taking out this provision definitely helped with reaching consensus.”

Philip would go on to submit the proposal at RIPE NCC meetings and suggest similar ideas to the other three RIRs. The RIPE NCC and AFRINIC implemented a similar proposal. ARIN and LACNIC implemented a policy where tiny assignments were assigned each time an organization asked for a chunk of addresses (they would go back to the end of the queue for every application).

Prop-062 was implemented in February 2009, specifying that APNIC would continue to allocate addresses on a ‘needs basis’, but once it got down to its final /8, all current and new Members were eligible to request and receive only one maximum allocation (/22).

In the following two years, Philip’s predictions about the remaining IPv4 space played out at more than double the speed expected, with the final /8s distributed to the five RIRs in February 2011.

Prop-062, or ‘the last /8 policy’ as it has become more commonly known, has had a positive influence on the development of the Internet in the Asia Pacific. Welcome to our 5000 Member🎈
Bluewave Broadband Ltd, based in Myanmar. http://t.co/xYvKaIeXKG pic.twitter.com/E8IfslEMA4 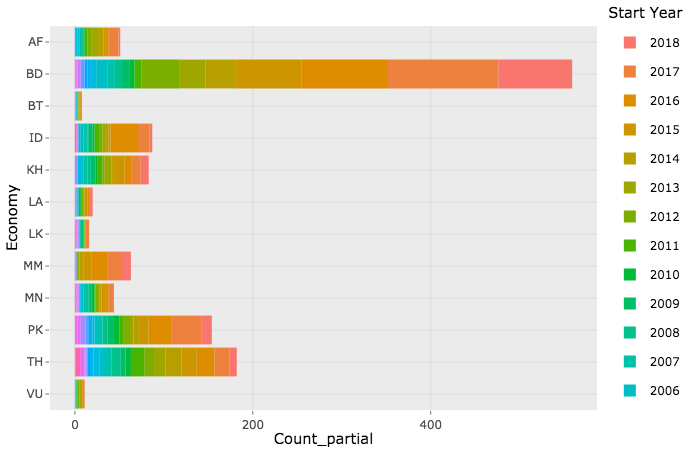 Did the authors’ notion that a final /22 of IPv4 would act as a transition mechanism, and encourage operators to move to IPv6, come true?

On face value, it is hard to say it has — yet. The scarcity of IPv4 has seen the rise of Network Address Translation (NAT) and today’s Internet of 23 billion devices runs on 2.8 billion IPv4 addresses. However, IPv6 adoption continues to steadily increase.

Philip’s tips for becoming involved in the policy process

“Don’t try to do anything by yourself. Make the effort to find co-authors, plural, so at least two. And not just friends but other people in the industry who have a similar desire to make the Internet better; people who are passionate.

Also, do your homework. Don’t just jump on the policy list and say ‘Hey, I’ve got a great proposal’ – don’t even mention proposal in the beginning. Instead, start by describing the problem you’ve noticed and a possible solution or ‘What if’ you and others have been thinking of. What you’ll find is people on the list may say ‘You might like to try and do it this way’.

It may take two months or so, but you’ll find you will narrow down your idea to something that might work as a proposal and potentially even find your co-authors too. You will have also already generated interest in the topic and a sizeable amount of consensus, so when it comes to presenting it at a Policy SIG, you will have a fairly good idea of whether it will be accepted.”