In the legacy IPv4 world, there are basically two ways for a site to be multihomed via two ISPs:

Moving to IPv6 renders the NAT approach cumbersome and removes most of the benefit of IPv6.

While the BGP approach works perfectly for IPv6, there is a need to have an architecture for small sites. This is possible because, in IPv6, all node interfaces can have multiple addresses from multiple prefixes; so, all site nodes can have one IPv6 address from all ISPs. And if the packet using one specific ISP link uses a source address from this ISP prefix, then the packet won’t be dropped by anti-spoofing and the return traffic will be routed through this ISP (the traffic is symmetrical which is a requirement for any stateful device).

Nodes select their source address based on RFC 6724. In short, this RFC will select the source address having the longest match with the destination address. While this mechanism is perfectly fine for an enterprise network, it does not work correctly for multihoming via different ISPs. Consider, for example, a site with two ISPs (Figure 1). 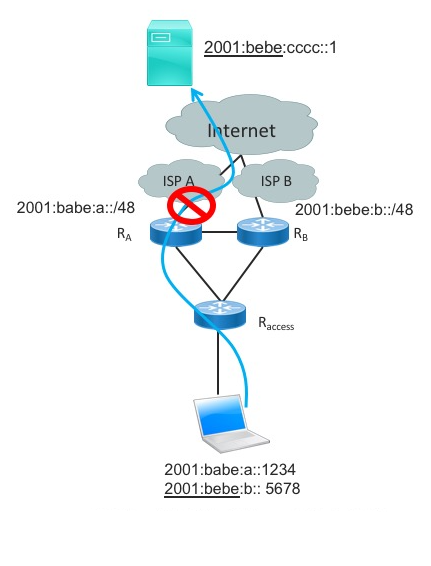 If the node needs to send packets to 2001:bebe:cccc::1, it will select an address from the prefix of ISP B. However, if this packet is routed on the site via ISP A, then this ISP will drop the packet.

In short, we need to be able to route packets with a source address from a prefix of ISP B via the egress router connected to ISP B. This is Source Address Depending Routing (SADR). There is an IETF draft on this topic (draft-ietf-rtgwg-dst-src-routing) and it is already implemented in Linux with experimental images in commercial routers.

Table 1 – Example of a Forwarding Information Base

Obviously, there will be no load sharing among the ISP uplink, but this is a very simple configuration.

If one ISP uplink fails, then draft-ietf-v6ops-conditional-ras should be configured as it will send a Router Advertisement (RA) with a prefix lifetime of 0 for the prefix of the unreachable ISP, actually removing all addresses from this prefix. So, new connections will never use those addresses and will use addresses from the other ISPs which will be SADR routed to a working ISP.

In my next post, I will present the security issues of SADR (and how to mitigate them), as well as propose a security design leveraging SADR for traffic analysis.

Eric Vyncke is a distinguished engineer working for Cisco, Belgium.