BGP routing table growth is one of the major Internet scaling issues, and prefix deaggregation is thought to be a major contributor to table growth.

While some prefixes are announced for traffic engineering (TE), prefix hijacking protection, or traffic blackholing, they are often not necessary for reachability. These prefixes put a burden on the overall routing system by providing additional features to a few players.

We focused on this issue in some recent research.  Firstly, we quantified the fragmentation of the routing table by the type of IP prefix. We observed that the proportion of deaggregated prefixes has quasi doubled in the past 15 years. Our study also showed that the deaggregated prefixes are the least stable; they appear and disappear more frequently.

While we cannot see significant differences in path prepending between the categories, deaggregated prefixes do tend to be announced more selectively, indicating traffic engineering. We found cases where lonely prefixes are actually deaggregation in disguise.

Indeed, some large transit ISPs advertise a large number of lonely prefixes when they own the covering prefix. We show the extent of this practice and its negative impact on the routing table even though it can usually be avoided.

We used data from the Level3 (AS3356) BGP feed into the Route Views project, a full feed from a large transit provider. We found no notable differences among Route Views or the RIPE Routing Information Service RIS BGP peers for our purpose, so we considered this feed representative. We classified prefixes using the taxonomy defined in reference 1 below:

Figure 1 shows an example of this classification. 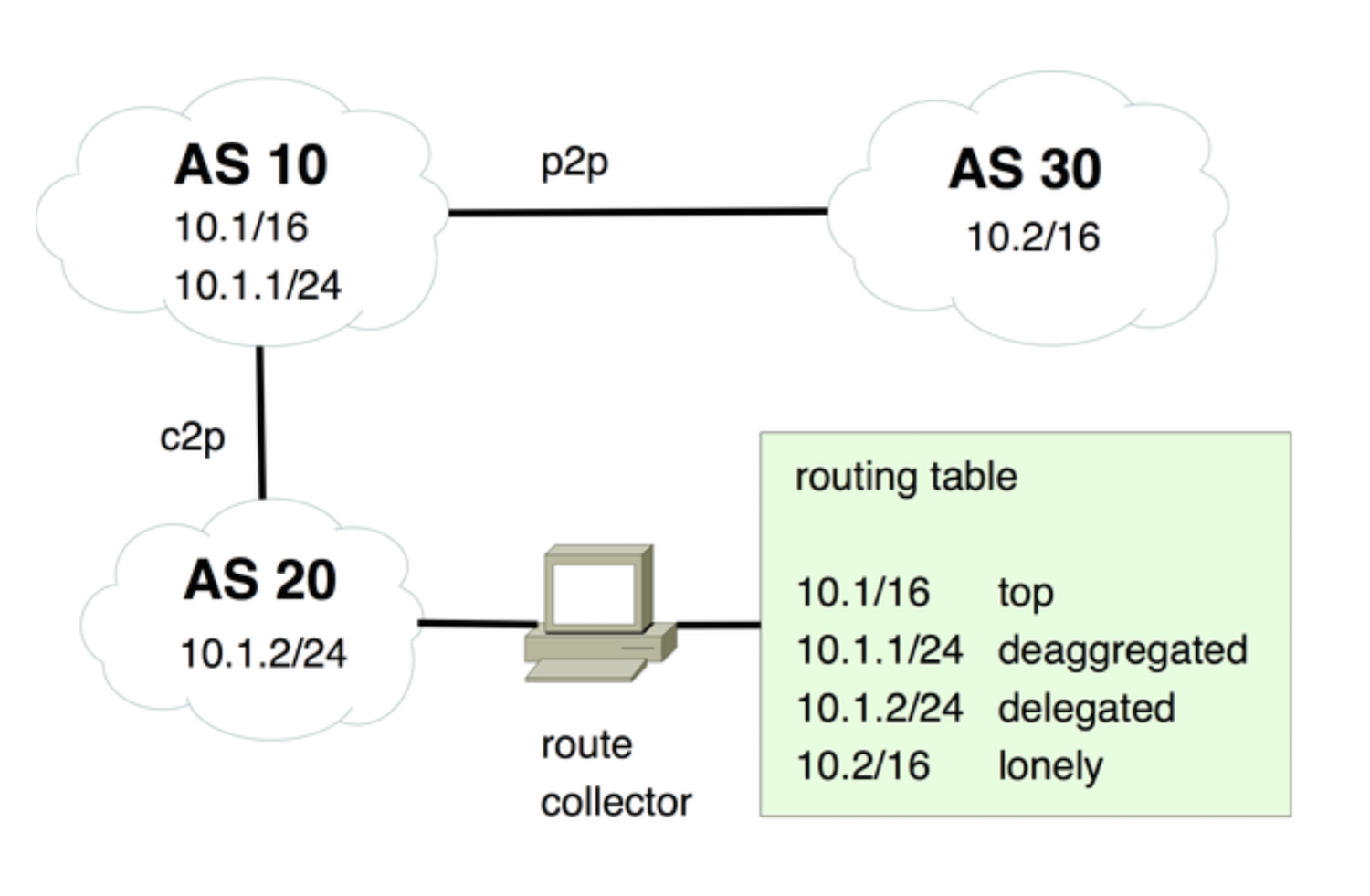 In this configuration, we have three ASes. A route collector gathers all prefixes announced by AS 20 and classifies them. Here, AS 20 hands over a customer view to the monitor. 10.2/16 is not overlapping with any other prefix, so it is classified as lonely. However, 10.1/16 is covering two other prefixes: it is classified as top. 10.1.1/24 is announced by the same AS as its covering prefix (AS 10), so it is deaggregated. Finally, 10.1.2/24 is covered by 10.1/16, but it is announced by another AS (AS 20): the prefix is delegated. 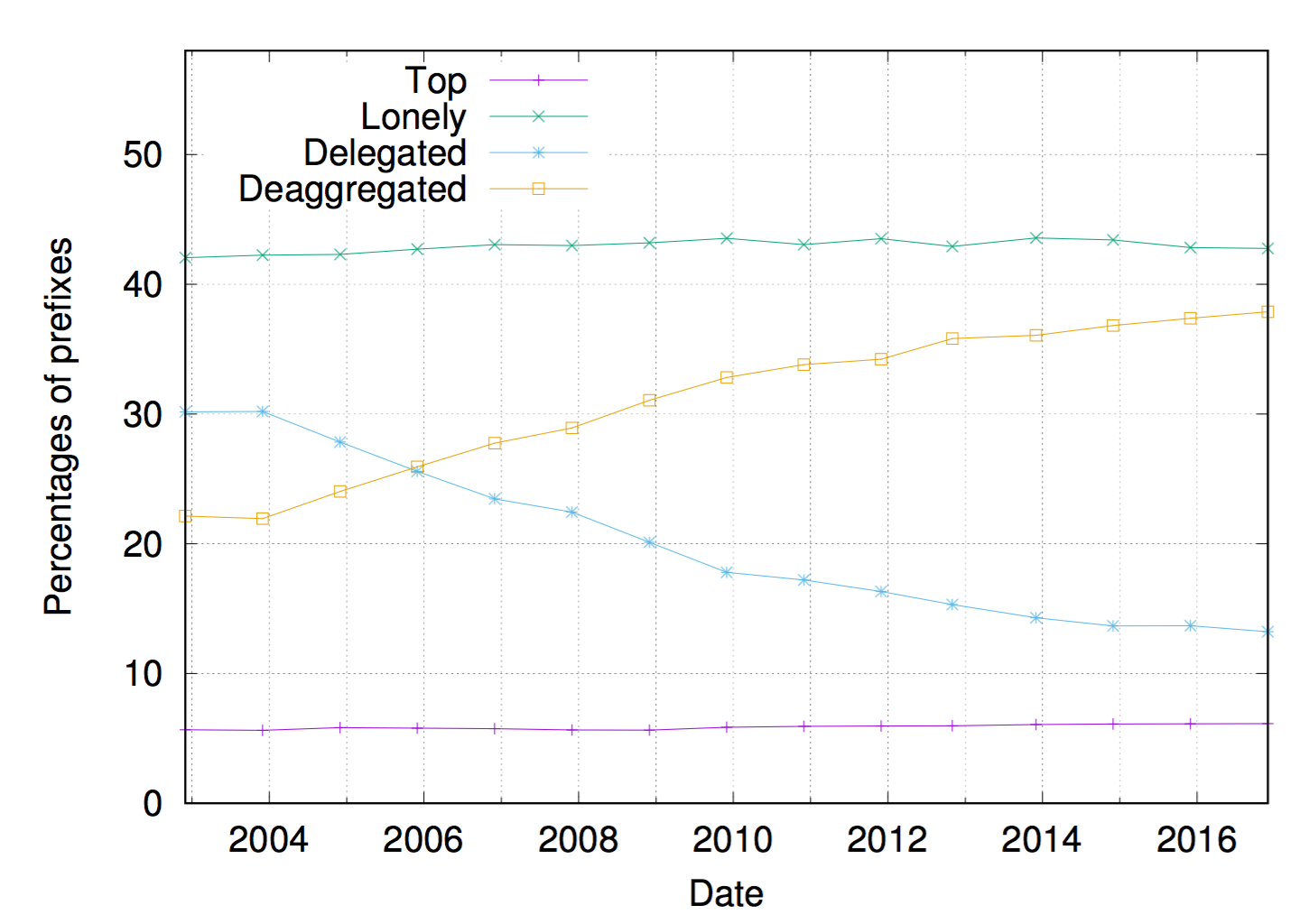 Is it Traffic Engineering?

We looked at AS path prepending and at selective announcements, as these are signs of traffic engineering (TE). Here, we used data from all the Route Views route collector peers. We saw a 3% increase in popularity of AS path prepending: from 9% of all prefixes in 2001 to 12% in 2016.

We noted that this increase of AS-path prepending is not specific to deaggregated or lonely prefixes; it occurs for all classes of prefixes. To detect selective announcements we count, given a prefix, how many peers see it. We consider a prefix to be selectively announced if it is seen by less than half of the route collector peers. Figure 3 shows our results. Figure 3: Proportion of selectively announced prefixes by category over time

Who is engineering traffic? 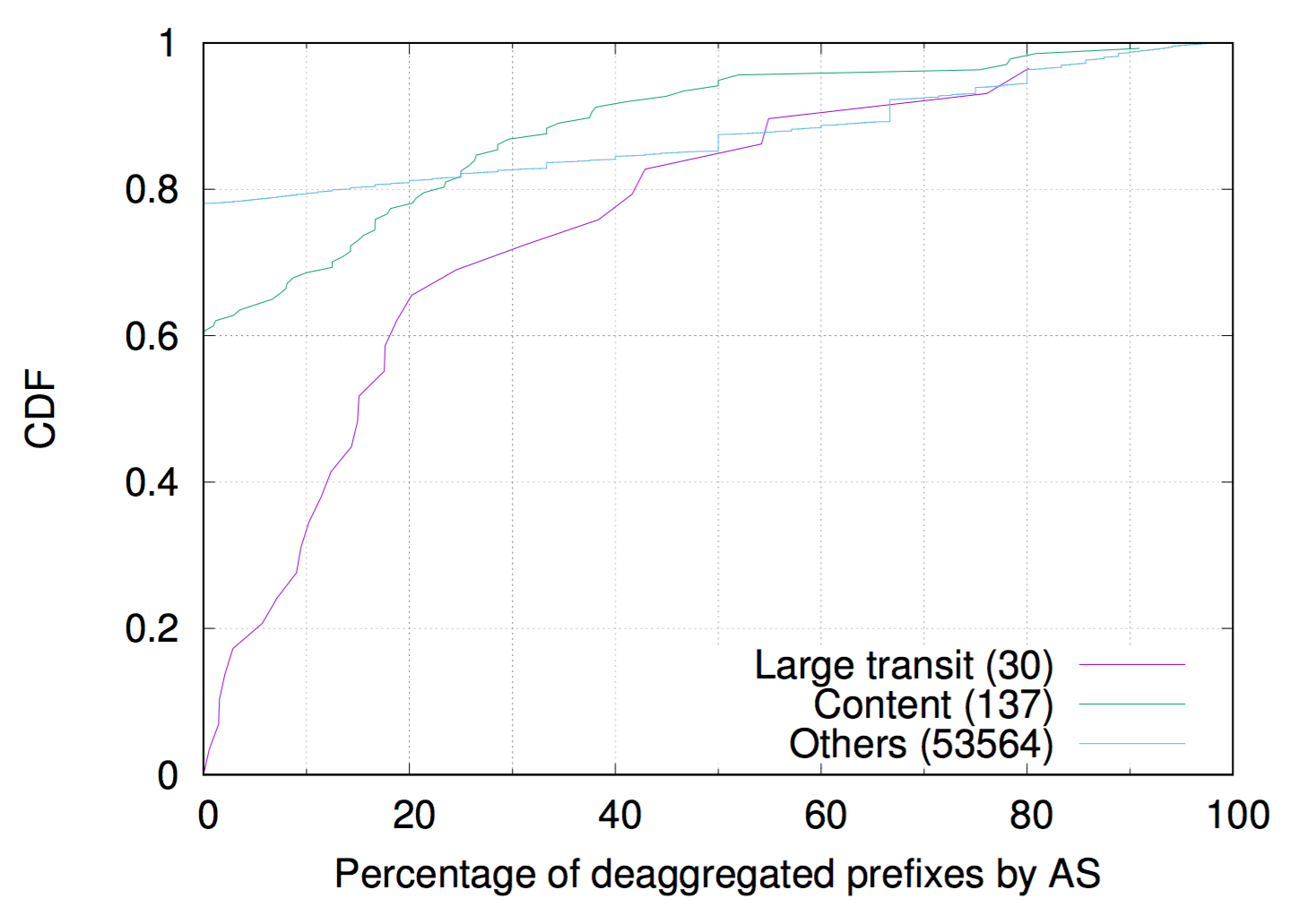 Figure 4: Distribution of the percentage of deaggregated prefixes per AS

Some ASes may hold a large prefix but announce it only in smaller pieces. Why would ASes do that? Probably for the same reasons as the advertisement of deaggregated prefixes; we saw that both types of prefixes are selectively announced to the same extent. In the case of lonely prefixes, operators may assume sufficient redundancy to not need the advertisement of the covering prefix. The aggregation of the prefixes from these two classes could help reduce the size of the routing table. This is a new finding: Cittadini et al [1] do not consider lonely prefixes to be aggregatable.

We saw in section 2 above that both lonely and deaggregated prefixes are used to do traffic engineering. In this section we want to estimate to what extent these prefixes could be aggregated. We consider two prefixes to be aggregatable if (1) they have the same AS origin, (2) they are consecutive, and (3) the aggregate falls on a power of two boundary. This lets us estimate the level of pollution of the global routing table.

This estimate does not take into account the fact that some content providers may split their address space because they lack a proper backbone. In this case, replacing the prefixes by an aggregate would not be an option, as traffic may not reach the proper geographic location. Figure 5 shows the lonely and deaggregated prefixes that could be removed from the Level 3 feed after aggregation. 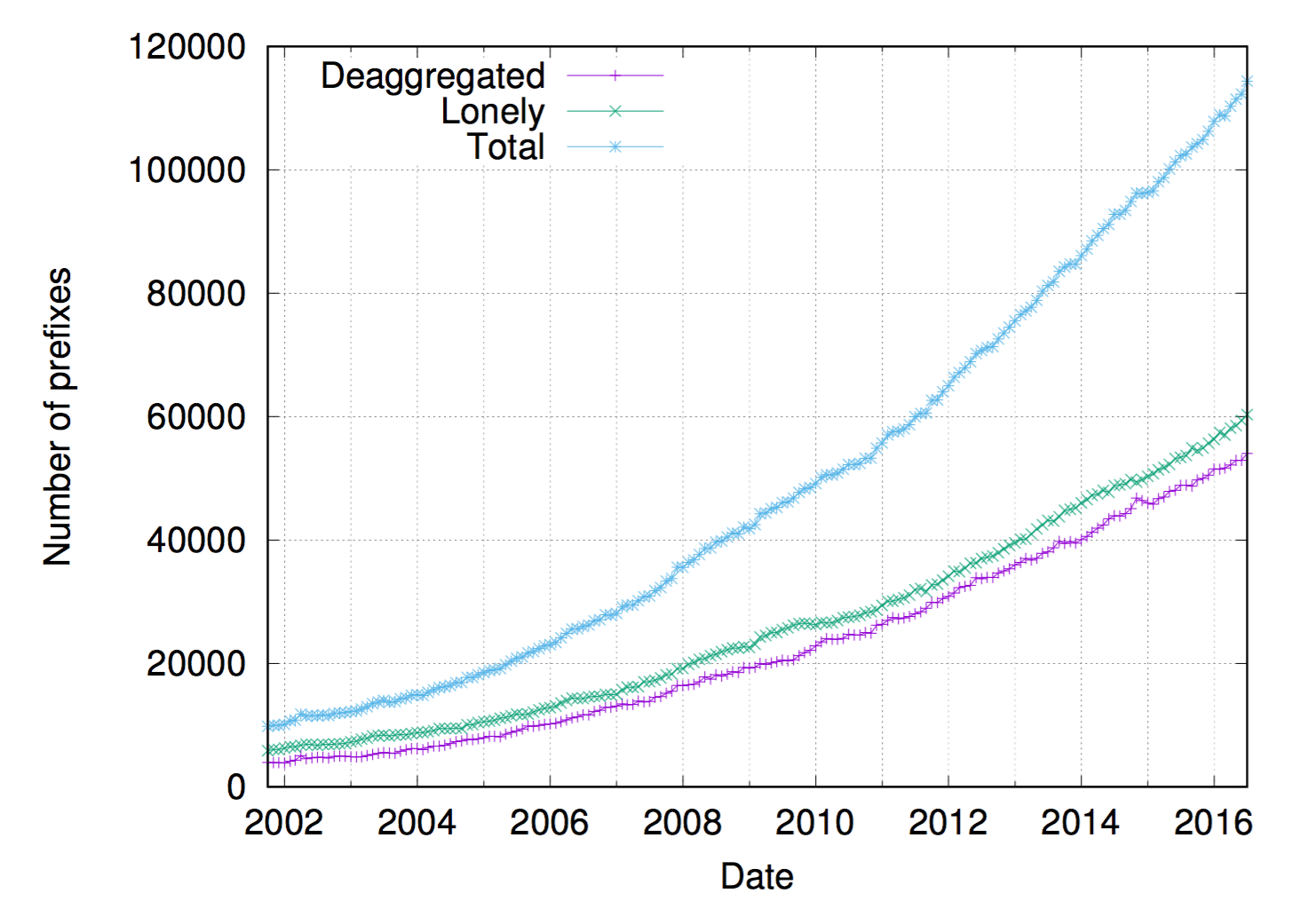 This amount is increasing: going from 9.5% aggregatable prefixes in 2001 to 19.5% in 2016. Clearly, there would be a real benefit to aggregate lonely and deaggregated prefixes as much as possible. The gain is less than described in Sobrinho et al [2] but our criteria allow one to aggregate prefixes and still be able to do route origin validation (see Why origin validation can’t help DRAGON routing).

Others have studied the extent of pollution of the routing table. In this work, we extend Cittadini et al [1] and study the state of deaggregation from 2001 to 2016. In Reducing the BGP table size – a Fairy Tale, George Michaelson et al. compute the required allocation if prefixes could be redistributed optimally.

Dragon [2] is a solution to dynamically filter the deaggregated as well as to aggregate prefixes conditionally while ensuring BGP convergence and correctness. Krenc and Feldmann [3], looking at only delegated prefixes, find both provider-to-customer delegation and the reverse.

In this work, we observed that the proportion of deaggregated prefixes has increased over the past 15 years. While we see only 3% growth in path prepending, deaggregated and lonely prefixes tend to be announced more selectively, indicating traffic engineering. We find cases where lonely prefixes are actually deaggregation in disguise.

Traffic engineering is not solely used by stub ASes. We found that some large transit ASes heavily fragment their address space. Aggregating these prefixes would reduce the routing table size by roughly 20%. The key question is, which traffic do they try to control? If it concerns the traffic from a few ASes, one could imagine TE being negotiated separately, outside the routing protocol.

Please also see my presentation at the RIPE 74 Meeting in Budapest.

Julien Gamba is a graduate student at the University of Strasbourg, France, who is currently working on iBGP correctness.