Telstra, Australia’s largest telecommunication service provider, has made IPv6 available to the general public on its mobile services since last September. This means when Telstra customers attach mobile devices enabled for IPv6 to the network they will receive both an IPv4 and IPv6 address.

It has been five years since Telstra first enabled IPv6 in its enterprise and wholesale Internet access product, and nearly three years since IPv6 was added to their NBN (National Broadband Network) consumer offerings. Now, the completion of a five-year project adds IPv6 to Telstra’s mobile services which will greatly increase the proportion of Australian users using IPv6 as Telstra adds the protocol to more mobile devices over the coming months.

We had the good fortune to catch up with Telstra’s Senior Technology Specialist, Sunny Yeung, to ask him about Telstra’s mobile IPv6 deployment strategy and to share some of the lessons they’ve learned along the way.

What was thinking behind Telstra’s decision to deploy IPv6 for mobile services?

Sunny Yeung: The mobile IPv6 project was created as part of an established program to introduce IPv6 across Telstra’s Internet services – both as a response to the forecast global exhaustion of public IPv4 addresses, but also because of our commitment to Internet technology evolution.

We could see the benefits that the massive IPv6 address space would bring to simplifying future network designs, with its greater capability to support the expected explosion of IoT devices.

It also made far more sense for us to aim directly for that end IPv6 goal than to attempt to build complex and costly solutions to temporarily extend IPv4 use when a transition to IPv6 would still be needed a few years later anyway.

What was your strategy for deploying IPv6 for mobile services?

SY: It’s important to have a strategy in place to make sure you have achievable goals during the entire process. As part of our strategy, we decided very early on to roll out IPv6 over two phases.

The first phase involved deploying dual-stack internally to give us time to understand and gain confidence in using the technology before we made it public. So they’ve had almost three years to get comfortable with it and learn how to troubleshoot any issues.

The core of the network will be dual-stack until IPv6 becomes the more popular protocol. We’re providing our customers the option to choose what they want to use. The reason for that is we have a lot of customers with older devices, so we need to provide a way for them to connect to our network.

The second, and current, phase involves preparing our mobile network to enable user devices to connect using only IPv6 (or “single-stack”). We understood early on that single-stack was the end goal and I think that should be the end goal for everyone since it is the only way to stop the growth in demand for IPv4 addresses.

Although we’ve rolled this out over two phases, we’ve been working on dual- and single-stack simultaneously. This is so we only have one transition event.

What transition technology are you implementing?

SY: We have decided on using 464XLAT+NAT64+DNS64, because although there is no one-size-fits-all technology, 464xLAT is supported in Android and Microsoft devices and our testing showed it worked seamlessly with a wide variety of popular applications. We pursued it very hard with the author (of RFC6877) and Google.

Most Android handsets released over the last year by Telstra already support 464XLAT, and it will only require a carrier setting update to enable it.

What skills and knowledge within Telstra have you had to develop to deploy IPv6?

SY: I think the whole process has been a fantastic professional development experience for all of us at Telstra.

When we first started, we only had a basic understanding of what IPv6 was. A lot of what we have done has been trial and error, and learning from the experiences of other providers like T-Mobile and SK Telecom – those guys have been leading the pack on IPv6 deployment.

Having relationships with these international carriers is invaluable in terms of choosing what technologies to deploy as well as how to troubleshoot issues you are having – most likely they’ve had similar issues.

Another important facet of capacity development has been the internal training we’ve conducted for Telstra staff. I’ve had to deal with almost the entire company including, marketing, service insurance, operations, engineering, support and front of house. Most training has been face-to-face but we’ve also done online training.

An important thing to remember is each IPv6 deployment will be different for every carrier; there is no one-size-fits-all option. You can get generic training to cover the basics, however, you still need that tailored training that is specific to your circumstance and technology. 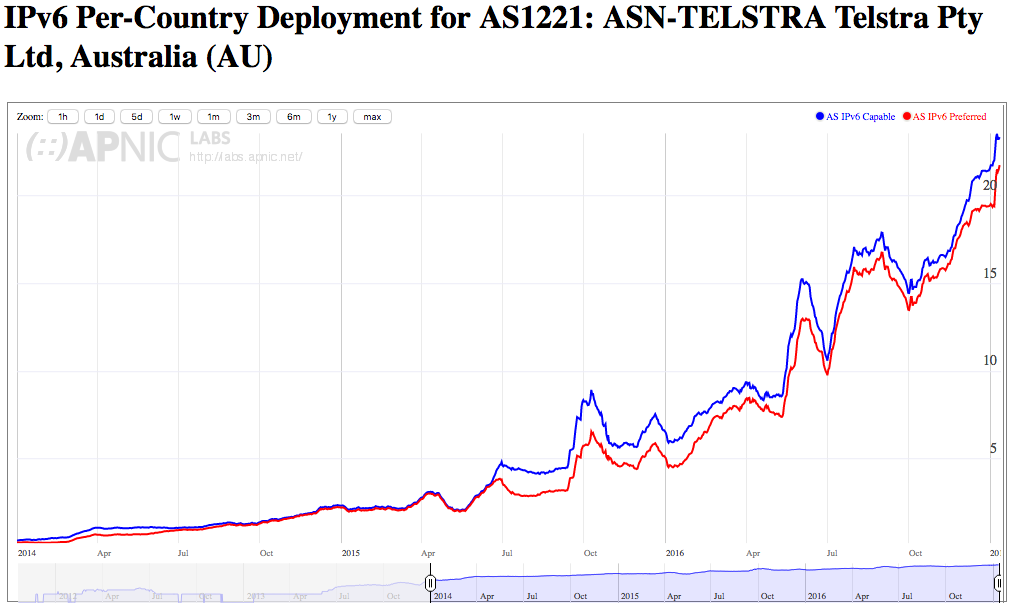 What have been some of the technical challenges you’ve faced?

SY: Testing has probably been the biggest challenge we’ve had during the project.

Technically, being able to understand what IPv6 was doing in the test environment was very important. Capturing IPv6 packet information for analysis is the easy part, however, understanding the capture is very difficult because we did not understand what the IPv6 traffic was actually doing. Although it works very similar to IPv4 there are subtle nuances that we need to learn how to interpret, especially when things go wrong.

We’ve actually been thinking about releasing IPv6 for mobiles since 2014 but with technology advancements, networks changes and other circumstances arise to a point where you have to make a call on whether you hold off a bit longer or whether you push on ahead and launch.

Every time a new product comes in you need to make sure you can cater for it. But there comes a point where you have to draw a line in the sand. That wasn’t so much a technical challenge so much as a project management challenge.

The advantage that other companies have now is the ability to rely on our testing results so they can learn from our experience and their rollout should be a lot smoother.

Why is it important to engage with the community about your plans?

SY: One thing I noticed early in this project was that you couldn’t launch a product without the support of your community. Although consumers don’t necessarily need to know about the process or how it works, as long as their connection isn’t interrupted, at the very least we still need to engage our more technically-minded customers, as they will be the ones doing most of the migration.

If we don’t disclose that and help our customers along in this journey, they’re just going to get frustrated. The worst outcome that could happen is everyone requesting a rollback to IPv4.

What challenges lie ahead?

SY: Supporting the migration will be our biggest challenge in the foreseeable future. T-Mobile launched single-stack in 2014 and only just shut their technical support forum down after two years. I’m expecting that we’ll need to provide a similar amount of support over a similar amount of time.

I’m not concerned about the work required to provide this support because the importance for our customers to have access to IPv6 far outweighs the back end work required to support the migration.

Sunny Yeung is speaking at the PTC’17 session IPv6 is Live! Real World Success Stories on Sunday, 15 January 2017.  If you’re attending PTC’17, please do join the session to hear more about IPv6 deployment, or you can follow the discussion remotely via the live video stream on the APNIC Facebook page.