Last month I attended the annual UK IPv6 Council to exchange knowledge and ideas with the rest of the UK networking industry about bringing forward the IPv6 rollout.

For the uninitiated, everything connected to the Internet needs an address. With IPv4 there are only four billion addresses available which isn’t enough for one per person – let alone one each for my phone, tablet, laptop and new Internet-connected toaster. So, IPv6 is the new network standard that effectively has an unlimited number of addresses and will support an unlimited number of devices. The hard part is persuading everyone to deploy the new protocol.

Progress is being made in the UK

Two years ago when the IPv6 Council first met, roughly 1 in 400 Internet connections in the UK had IPv6 support.

Since then, Sky has rolled out IPv6 everywhere, with all customer devices with IPv6 support using it as default. BT has also rolled out IPv6 to all their SmartHub customers and will be enabling IPv6 for their Homehub 5 and Homehub 4 customers in the near future.

Today one in six UK Internet connections have IPv6 support and when BT completes its rollout, it’ll be closer to one in three. 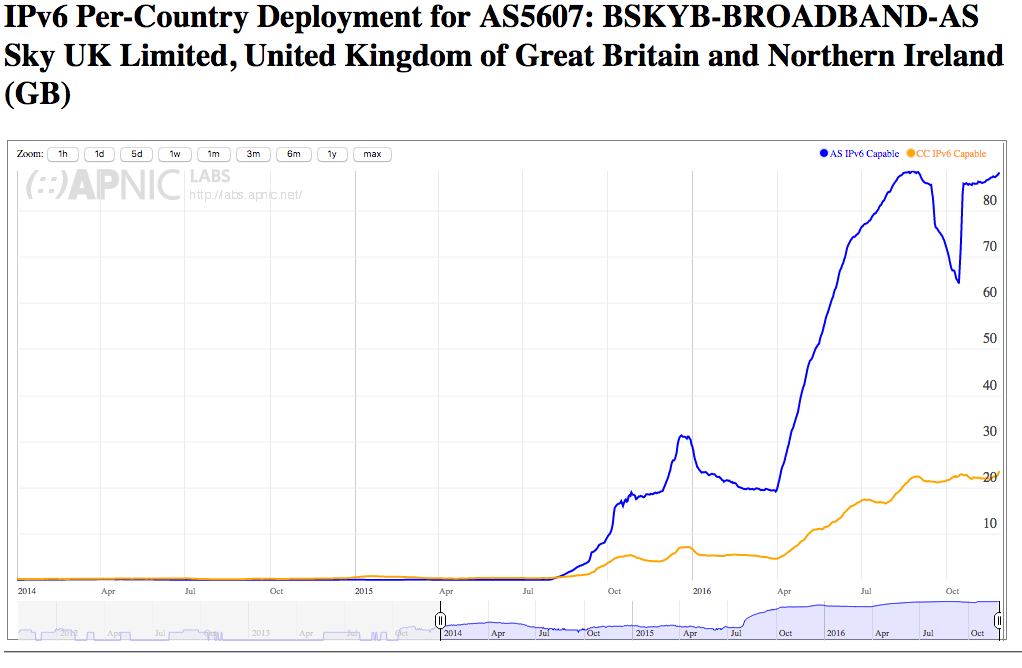 LinkedIn and Microsoft both spoke at the recent meeting about deploying IPv6 in their corporate and data centre environments. Both companies are suffering exhaustion of private RFC1918 address space – there just aren’t enough 10.a.b.c addresses to cope with organizations of their scale, so they’re moving now to IPv6-only networks.

Major content sources (Google, Facebook and LinkedIn) and CDNs (Akamai and Cloudflare) are all already enabled with IPv6. This means that as soon as you turn on IPv6 on an access network, over half your traffic flows over IPv6 connections.

With Amazon and Microsoft enabling IPv6 in stages on their public clouds by default, traffic will continue to grow, with the Internet Society predicting that IPv6 traffic will exceed IPv4 traffic around two to three years from now.

Pete Stevens is Director of hosting firm Mythic Beasts based in Cambridge, UK.