In November 2014, after quite some controversy in the IETF OPSEC working group (for those interested look at the archives), the Informational RFC 7404 “Using Only Link-Local Addressing inside an IPv6 Network” was published. It is authored by Michael Behringer and Eric Vyncke and discusses the advantages and disadvantages of an approach using “only link-local addresses on infrastructure links between routers”.

So it’s (merely) about “infrastructure links”, which some people call “transit networks” or “point to point” (ptp) links. I’m aware that there might be subtle differences between all these, depending on your specific use of the terms. Still, I assume that most readers will have an understanding of what types of links are in focus of the RFC, and subsequently of this post.

The RFC lists the following potential advantages of such an approach:

On the other hand, the RFC lists the following potential disadvantages of the LLA-only approach:

Overall the RFC does not provide a final recommendation but states:

“A network operator can use this document to evaluate whether or not using link-local addressing on infrastructure links is a good idea in the context of his/her network.”

Let’s now have a look at a case study in one of our customer’s environments. That organization is a very large enterprise (200K+ users, many subsidiaries) in the manufacturing industry sector. They have an own wholly owned IT operations provider (think “XY systems”), hence the OEs within the group are considered “customers” (from that internal provider). XY systems operates a company-wide MPLS network spanning several countries. The main platform for PE devices is Cisco ASR 1006 and 1013 running IOS XE 03.10.

There’s a group level IPv6 project ongoing in the course of which going with an LLA-only approach for PE-CE links (with identical addresses on all affected links) was identified as one of the main architecture benefits of IPv6. This would roughly look like this (illustration from lab): 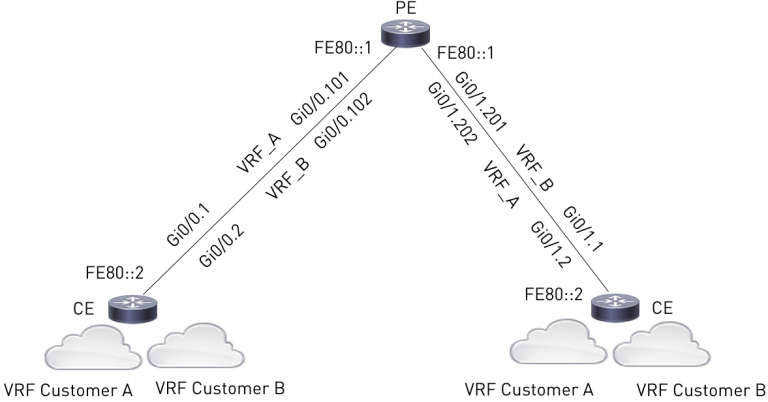 I won’t discuss their reasoning in detail here, but trust me: they’re smart people and they have good reasons for this decision. Amongst others it should be noted their IPAM database currently holds 43,200 networks, 20,600 (47.7%) of which are point-to-point networks.

Unfortunately, when testing the planned configuration in the lab, the following happened (during configuration of the second BGP peering):

What happens here is that the configuration of the remote-as statement corrupts (actually: overwrites) the first BGP peering’s remote-as which, evidently, brings down the first BGP session. It turned out that this is common behaviour (on different platforms and releases) and it’s documented in the Cisco Bug Report CSCuy05100.

So essentially the planned design and configuration approach currently does not work, due to lack of vendor support at the moment (May 2016). They hope it will be fixed soon, though.
(One may note that, ironically, guys from the same vendor authored the RFC laying out the approach).

To summarize I’d like to draw some conclusions from the above:

I gave a talk on the topic at RIPE72 last week. The slides and the video of the RIPE72 talk can be found here and here.

Furthermore we’re working on a post on the recently published “IPv6 Neighbor Discovery Crafted Packet Denial of Service Vulnerability” (I hesitate calling it a “new” vulnerability…), so stay tuned.

Enno Rey is a long-term IPv6 enthusiast with lots of practical experience in the space.