On Thursday of last week (September 24th), the American Registry for Internet Numbers (ARIN) announced that it has officially run out of IPv4 addresses. This is an important milestone in a countdown that started on 3 February 2011, when IANA‘s central pool of IPv4 addresses was depleted, triggering the implementation of the last phase of the Global Policy “for the Allocation of the Remaining IPv4 Address Space“. That policy requires IANA to equally distribute the remaining public pool IPv4 blocks to the five Regional Internet Registries (RIRs) – each RIR receiving a single /8 block (around 16 million addresses).

You may be asking, “Why is it important to highlight IPv4 depletion in ARIN region?” Let’s take a look at why.

First of all, this event closes the loop on IPv4 depletion for the RIRs that serve the OECD (Organisation for Economic Co-operation and Development) countries, which have the most developed Internet Infrastructure. And second, the majority of IPv4 addresses are used within North America – 40% of the total pool are used in that region (Figure 1). 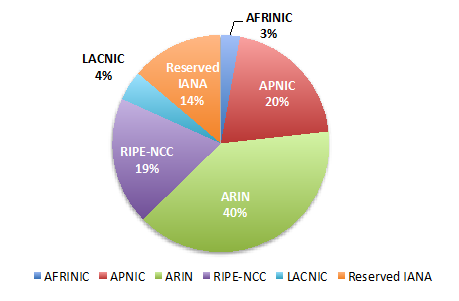 Now that ARIN‘s pool has been depleted, AFRINIC remains the only RIR that still has IPv4 addresses available for normal allocation and assignment. I will be exploring that more later in the article, as it’s an interesting situation.

Obviously, the fact that the biggest consumer of IPv4 addresses (North America) has run out will have an impact on the region. It will probably put more pressure on the IPv4 transfer market and the costs associated with transfer services (as there aren’t any other alternatives to the regular allocation process). This will push the operators to pay more attention to the ultimate solution for the IPv4 exhaustion that the technical community, with the RIRs at the forefront, have been promoting for several years: IPv6. This has been said and repeated time and time again, but it is time to start considering IPv6 as the Internet Protocol, because we are moving a bit away from IPv4 every day. While IPv4 will continue to be used as legacy protocol for a while, the future is with IPv6. It allows for greater visibility in any planning for scalable development of Internet services and usage.

Companies and network operators need to make the important move to ensure that their infrastructure is IPv6 ready, and they need to do so today. They can either continue spending a lot of money growing their network with a version of the Internet Protocol that has shown its limitations in term of number of available unique identifiers, locking themselves in a gray transition area by doing so, or put themselves ahead of the curve and get ready for a market that will serve billions of users and billions of connected devices.

Let’s pause for a moment and go back to the case of AFRINIC, which has suddenly become the last frontier for IPv4. Is that an advantage or a handicap? Take a look at what happened in a region like APNIC, where IPv4 ran out in 2011 (the same year that the central pool ran out). Up until a year ago, APNIC‘s region served as the global leader in expanding the IPv6 network. And when LACNIC ran out of IPv4 addresses last October, its IPv6 penetration ratio surged to the highest amongst the five RIRs (Figure 2). Globally, as per Figure-3 below, IPv6 visibility in the global Internet topology has been consistently growing since 2011. 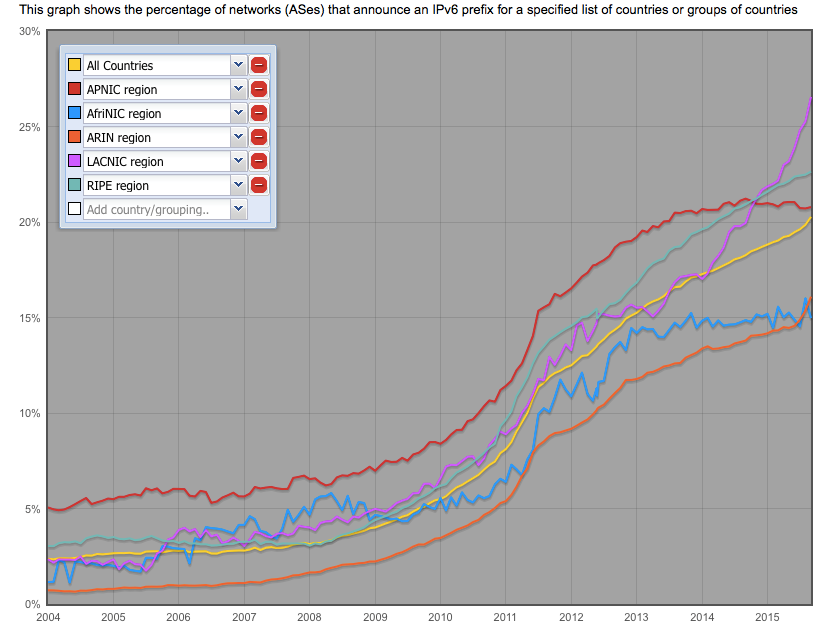 What I want to highlight here is that when a region runs out of IPv4 addresses, it does not negatively impact that region’s Internet growth and development. To the contrary – it forces the region to embrace the future. It should not be any different in Africa. The AFRINIC community probably needs to take a closer look at the situation and develop policies that strike the right balance between allowing newcomers to come online and giving the region a chance to actively embrace the future. It’s well known that mobile technology and mobile currency (soon coupled in the region with the expansion of Bitcoin) are rapidly transforming the global landscape. It would be a pity if AFRINIC’s region were to hold onto too many IPv4 addresses, instead of moving on to IPv6, especially as the 4 other regions are left with IPv6 as the only choice. The implications for not embracing IPv6 would be huge – not only because we will once again become the dumping ground for antiquated technology and equipment, but also an attractive playground for ill intentioned operators, brokers and alike intent on making money by maintaining IPv4 connectivity with artificially high value for IPv4 addresses.

With ARIN‘s pool now depleted, the game has definitely changed, and we expect to see the future of the RIRs’ business model evolving. Instead of managing scarce resources, it will shift towards the management of an abundant resource, where the primary roles will be maintaining an accurate registry of allocated/used IP addresses (v4 and v6), absorbing the anticipated increased number of interactions with the registration services they provide and providing easy access to users/operators to manage their space (simplicity of multi-purpose access to information about IP address usage stored in the RIRs’ public databases will become critical).

It is important to note that although they may be in the depletion phase of IPv4 addresses, a few RIRs have policies that allow them to continue allocating from their last /8 block in smaller chunks. RIPE NCC, for instance, will continue allocations per the guidelines outlined in section 5.1 of its “IPv4 Address Allocation and Assignment Policies“. Essentially, it is still allocating a small size of the IPv4 block (/22 = 1024 unique IPv4 addresses) from its last /8 (185/8) to operators under certain conditions1.

It is incredibly encouraging to see large service and connectivity providers, such as Facebook, Apple, Microsoft, Comcast, British Telecom and a few others making concerted, visible efforts to make sure that they are ready for the future, by making their network and services IPv6 ready. Their active engagement on this will definitely put a bit more pressure on equipment vendors as well. The time to act on IPv6 is now. The more we work with IPv6, the more robust it will become, and the more we’ll see its potential become unlocked for marketers and business decision makers.

Figure-3: Evolution of IPv6 visibility in Internet topology as measured by caida.org between 2011 and 2014 compared with IPv4 in 2014 2 (Source: caida.org)

Where does ICANN stand on all of this? Well, ICANN, as the IANA functions operator, has an important stake in this, as most of its future services to the numbers community will be for IPv6 allocations. Moreover, as the driving force of the domain name industry, which supports online applications, it is important that ICANN works with the domain name community to ensure that not only can they allow for delegation to IPv6 ready DNS servers, but also that their own infrastructure is IPv6 ready and can provide services to their customers via IPv6. Registries and registrars should also join the wave of other actors and raise awareness about IPv6.

We at ICANN should be prepared to provide more support to the community in this area. We hope to collaborate with the RIRs and other organizations that have been active in this area to jointly develop tailored training materials and tools aimed at the domain name industry.

Together, we can work with the community in driving forward IPv6 adoption. Doing so will ensure that the Internet can continue to grow.

This story originally appeared on ICANN Blog – IPv6: The Future is Now More than Ever.

Adiel. A. Akplogan is Vice President of Technical Engagement at ICANN.  Before joining ICANN in early 2015, Adiel served as the Chief Executive Officer of AfriNIC for more than a decade. He is among the original Internet pioneers in West Africa, where he has played a critical role in setting up and managing CAFENet, one of the first private Internet Service Providers in the region.

1 That section of the policy states that an LIR may receive only one /22 (1,024 IPv4 addresses), even if they can justify a larger allocation. No new IPv4 Provider Independent (PI) space will be assigned.

2 IPv4 and IPv6 AS Core: Visualizing IPv4 and IPv6 Internet Topology at a Macroscopic Scale in 2014 – http://www.caida.org/research/topology/as_core_network/2014/