Sunny started with an observation of the utility of the legacy payphone network, which has to have mains voltage and cabling. This presents an opportunity to deploy many of the planned  2.5m hotspots for the continent, using the in-ground investment. This follows a model deployed in other economies (London, New York) and will be an open-bus model where other MVNO-style networks can be deployed, and using local stores for card-based credit/topups. Telstra is also exploring shared use of home gateways and SME networks on Telstra backhaul (you don’t pay for the backhaul data but you do need to be able to sustain the extra bandwidth).

Geoff Huston (APNIC) presented on Today’s Mobile Internet -a 38,000 ft view of where we’re moving to in technology. His key point was that the really critical technology embeds so deeply you’re not even aware its there: water distribution, power, gas, petrol depends on a huge investment in civil engineering, mining, investment, which is simply taken for granted. So taking this model, what do we think about computing and telecommunications? His slidepack is well worth reviewing for this high-altitude view of the tech/comms world, reviewing the 20 year jumps in technology from ENIAC through the IBM360 to the Mac and beyond to the mobile phone. The consequences of the social, financial shifts from this technology dependency are awesome! Geoff also noted the emergence of ultra-high speed WiFi technology but with a footnote that you don’t seem able to ever achieve the high end throughput the technology claims and certainly not at useful distances: these higher speed WiFi methods depend on properly cabled national infrastructure. From an RIR perspective, the frightening problem is the huge emerging gap in demand for addresses, and available supply. The failure to see widespread adoption of IPv6 is forcing technology into processes around NAT which really don’t help. And we need a twenty-year vision of where we want to be, to understand what trajectory we are prepared to live with.

Toshiya Masuzawa (NTT Broadband Platform, Inc.)  Spoke on Our experience in deploying public Wi-Fi infrastructure and the future vision toward 2020. This is the NTT real experience and future plans. NTT has over 200,000 WiFi APs deployed nationally, and has a national-scale carrier-grade WiFi service. NTT sees strong future potential in the 2020 Tokyo Olympic games, and sees WiFi mediated services such as translation, mapping, service-location as vital.

Narseo Vallina-Rodriguez (ICSI Berkeley) Talked about the measurement exercise ICSI is undertaking to characterize broadband and mobile data. The dependencies on bandwidth, latency for emerging apps are not always clear, and they want to understand how these networks perform, and how applications behave on them.

Narseo suggested that the traditional measurement of packet loss, latency and bandwidth don’t necessarily apply cleanly. Bufferbloat, CGNs, and other intermediary systems can confuse the model and add huge complexity to the analysis. ICSI has ‘netalyzr’ as a tool to try and understand ‘edge’ connectivity which can understand some of these intermediate roadblocks, and discover which parts of the end-to-end path are a problem, using 120 tests. Their (initially Java) applet, and now android application has 1.6m measurements, with over 29,000 installs in 200 operators over 130 countries. Because the ICSI software controls both client and server-side of the measurement the endpoint behaviour is fully understood, and more context is available to understand the specific problems seen in the path under test.

The ICSI measurements are able to test the difference in latencies introduced by different sources of DNS (in-provider, Google DNS, OpenDNS) across HSPDA and LTE and has shown there is a significant improvement in delay on LTE, but also differences emerge on the availability of localized CDN caches of data (Akamai and other sources). They also measured deployment of EDNS0 client subnet, which is used by the CDN providers to direct traffic efficiently. Not having this support impedes the ability of content localizing systems to work.

They also believe architectures for deployment chosen by the carrier can impact RTT massively, so the specific mobile carrier model used at Layer 2 to implement an IP network can impose additional delay.

ISCI has measured deployments of middleware boxes that provide services which change HTTP headers on the fly, adding and removing features in the request stream, and in trying to provide ‘speed up’ services like image transcoding they are interfering with the fidelity of the data exchange. Some of these changes include additions of private personal identifying information including IDD and IMEI, which clearly breach privacy but provide for monetization of the data exchange. None of the measured providers used the explicit proxy ‘Via’ tagging expected by the Internet Standards.

Ryuji Wakikawa (SoftBank Mobile) talked about Softbank’s WiFi deployment as an operational experience. Softbanks initial mobile deployment had limited cellphone RF spectrum, so a 2010 decision to deploy WiFi reflected scarcity of managed radio spectrum. Softbank now has 460,000 public and almost 4 million domestic fixed-location WiFi services to customers. They’re using load balancing across the WiFi spectrum to load balance traffic. Ryuji explored Softbanks current work, which includes upgrades to WiFi to match emerging 5G technology speeds, and the newer 802.11ac that has tunable antenna models of ‘beamed’ wireless to get the significant speed increases for individual devices. Softbank is exploring smarter noise filters to decide when to ‘hop’ from WiFi to 3G/LTE and back again, so that the best signal is used until it degrades so far, the ‘strongest’ signal can be used (albeit at slower speeds). An amusing development is ‘WiFi ninja’: a person with a battery powered WiFi access point, used to supplement signal at crowd-filled events. It’s more a PR stunt than a real technique although many mobile operators have powered vans with cellular phone towers to take to significant sporting events: its just a mini-version of the same idea! 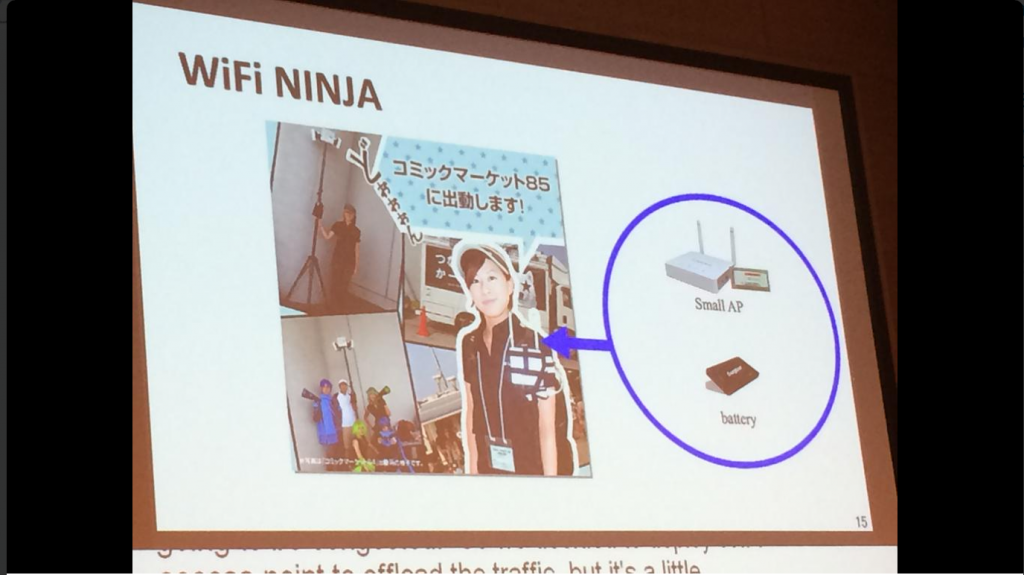 Softbank notices that the deployment can look like a random distribution (from a high end view) because of customer location, and opportunistic deployments with shops and the like, and also locations for LTE. They are looking for a more managed deployment to get bandwidth where its needed, to avoid saturation of the available spectrum in some locations and scarcity in others. This includes using LTE as backhaul, to run local WiFi base stations as a CPE. Not surprisingly, how to monetize all of this technology investment is an interesting problem too. Like NTT, Softbank is interested in what can be done for 2020 Tokyo Olympics and expects to increase spectrum availability for this time. They expect an increase in security too, given the rise of banking and other financial dependencies on mobile applications.