The World Internet Conference finished last Friday in the historic scenic town of Wuzhen, in the Zhejiang Province, People’s Republic of China. Wuzhen will become the permanent location for this Summit, which will be held annually in the years to come.

The recently formed Cyberspace Administration office and the People’s Government of Zheijiang Province hosted this conference, inviting more than 1000 participants from 100 economies, and showcasing China as a world class Internet gateway.

With the theme “an interconnected world shared and governed by all”, a high-profile group of Internet stakeholders from China shared views on future growth opportunities for a dynamic global Internet industry. Speakers were mainly from China but accompanied by a diverse group of international leaders. Entrepreneurs of widely known, publicly traded companies; technologists and economists; media analysts; policy-makers and Internet governance experts; as well as members of the technical and civil society international communities shared three days of sessions on different topics. 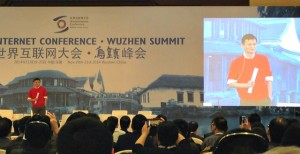 Many themes were covered in this Summit, including connectivity issues; cybersecurity, cyberterrorism and sovereign issues; development of technology, e-commerce, content, media and issues affecting the youth; and also Internet governance.

This conference was very impressive in terms of its organization and execution. There was a higher than expected number of interested and engaged participants. The meeting format was a unique combination of NetMundial gathering, a Davos style forum, a trade-show and a Conference. Very influential Internet players, who indeed play an important role in shaping the Internet in China and abroad, delivered most of the content of the sessions.

It demonstrated that the Internet in China is a very dynamic industry ready to share its success and promote its products internationally.

I had an opportunity to participate as a speaker in a panel entitled “global Internet governance forum.” In this panel, I was asked what improvements are needed to the current Internet governance ecosystem. I spoke about three: First is inclusion. There are still so many people, particularly in the developing world, who aren’t aware that Internet governance decisions may affect their Internet usage experience. Also, that their interests and opinions can be considered in future decisions. The current system must evolve in a way to facilitate the inclusion of these people whose voices need to be considered because they are an important part of the Internet.

Second is communications. So many people have got used to ideas and concepts that have been repeated so many times in Internet governance discussions. But many of these ideas, words and concepts, frankly, do not translate well for many people, particularly, newcomers to the Internet governance space. These ideas are not well understood mainly because of linguistic and cultural reasons.  We need to think of better ways to communicate and understand each other. This means that we need to simplify our language, and use more accessible words and images that translate well across languages.

Third is effective participation. There are many meetings and places where things are happening and decisions are being made. Many times these meetings are open, but not many people can participate because there are not enough resources for everybody to attend every meeting. We need to use the online space much better to address this.

At the end of the panel, Xiadong Lee, CEO of CNNIC and one of the moderators, asked the speakers how to solve the gap between developing and developed world, and resolve trust issues. Of the three billion users of the Internet, two billion are in the developing world. It is very clear that the current Internet ecosystem does not yet reflect this. But an important element to note is that there is no sustainable growth without IPv6.

The Wuzhen Summit was a good meeting to crown a busy year, and demonstrated that the voice of Asia-Pacific has much to say to the rest of the world, particularly in such a vibrant Internet economy such as China.