Opening Ceremony of IPv6 service provision at the Conference on Vietnam IPv6 Day (6 May 2019). Photo: VNNIC

This year marks the eleventh and final year of Viet Nam’s National IPv6 Action Plan — a key multistakeholder policy that has driven IPv6 capability to more than 34%.

Significant outcomes the Action Plan has achieved were highlighted during the meeting including the establishment of the national IPv6 network — and subsequent DNS server system — as well as expanding and making capable the National Internet Traffic Exchange (VNIX).

A number of leading Internet enterprises were also acknowledged for their efforts towards deploying IPv6 in their networks, and in doing so, boosting Viet Nam to second place in terms of IPv6 capability in South East Asia, and fourth place in the Asia Pacific. These include Vietnam Post and Telecommunication Group (VNPT), Viettel Telecom Group (Viettel), FPT Telecom Joint Stock Company (FPT Telecom) and NetNam Corporation (NetNam). Currently, more than 17 million Internet users in Viet Nam are connecting via IPv6, an increase of more than 50% from this time last year. 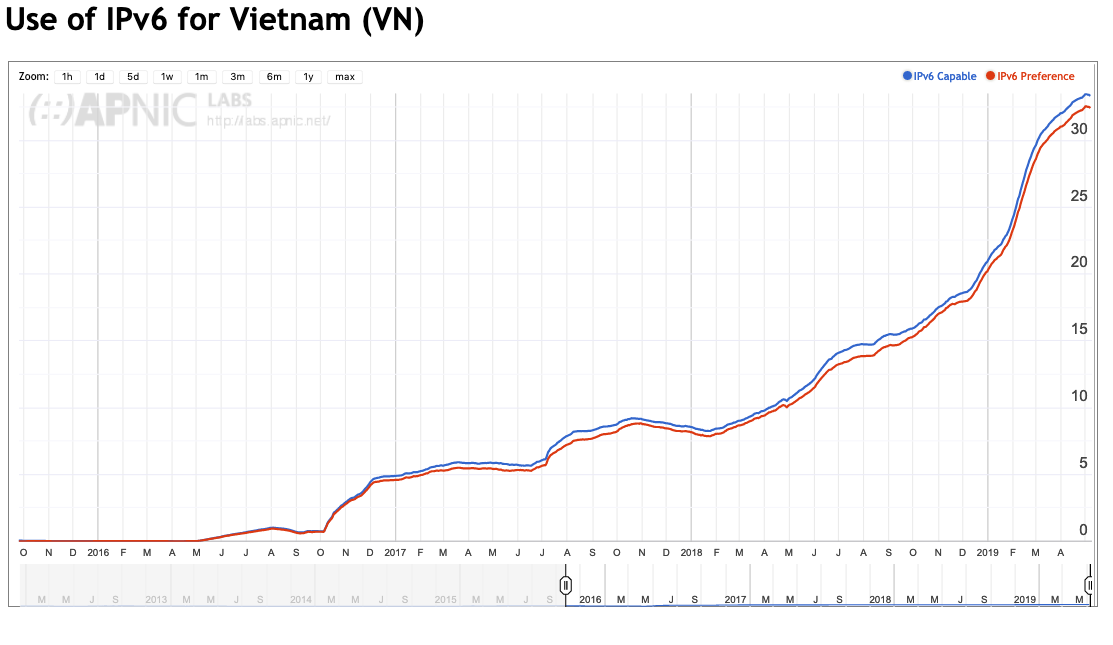 State agencies have also been key partners, helping to deploy IPv6 on their own networks as well as consistently promoting its use among its vendors, partners and local businesses. Many major agencies have successfully converted their IT systems, electronic information portals and online public services to IPv6, including the:

As of May, there were more than 34 electronic portals under the domain name .gov.vn operating with IPv6.

Although uptake by local content service providers has been slow, there have been some noteworthy early adopters among the 6,000 .vn websites offering IPv6, including:

Although the Action Plan is coming to a head in 2019, the Viet Nam Internet Network Information Center (VNNIC) Standing Task Force on the promotion of National IPv6 will continue its momentum by overseeing and collaborating with state agency and telecommunication partners on awareness and capacity development projects around IPv6 via its IPv6 for Gov program. This includes facilitating workshops to help government partners plan for and implement IPv6 in their systems, network and services, ensuring security requirements and other key deliverables associated with developing e-government and smart city services are catered for.