Perhaps it is their shared history of looking beyond the seas, but island economies are often strongly motivated to adopt the newest forms of communication technology; we’ve seen this in our previous LKSeries and we’re about to uncover it in our current NCSeries.

New Caledonia has always been one of the pioneering economies in the field of telecommunications in the Pacific region. It was the first Pacific island to trial 3G (2003) and one of the first to launch 4G (2015), which currently covers 71% of the population. It is also on track to be the first to roll out a national fibre to the home (FTTH) network to its 270,000 residents.

As the incumbent telecommunications provider, Office des Postes et Télécommunications de Nouvelle-Calédonie (OPT-NC), has played a major role in deploying and servicing the nationwide fixed and mobile networks, which cover the majority of the main island and the Loyalty Islands.

Established in 1958, as a national public institution linked to the Overseas Post and Telecommunications Bureau, OPT-NC was transferred from the State to New Caledonia in 2003 by virtue of the Nouméa Agreement of 1998 and the Organic Law of 1999, becoming the first public industrial and commercial establishment of New Caledonia.

With over 1,000 staff, its priorities have expanded from processing mail and managing and maintaining the economy’s telecommunication network, to including financial services and management of the .nc domain names (since 2006).

“Like any other business, OPT-NC’s objective is to create new products and services that meet the different needs of its customers,” says Philippe Gervolino, OPT-NC’s Director General. “However, as a public establishment, we also have a civic ambition to provide technical assistance in developing policy, and carrying out strategies and projects that improve the development of the community and economy.”

The latter of these examples, Philippe says, are “examples of OPT-NC’s strategy to foster and support new generations to work in and take advantage of the ICT sector; meeting one of the key objectives of the Government’s Digital Strategy for the Economy”.

“For the people of NC, it means better and cheaper services, as well as adapted offers for local companies.

“OPT-NC’s strategy relies on the Government’s PSEN, especially to avoid the population being isolated throughout the territory, or to propose cheap access to information and training to digital tools.”

Out with the old, in with the fibre

Despite its historical monopoly over infrastructure development, OPT-NC was not New Caledonia’s first Internet Service Provider (ISP). That honour went to CAN’L; established in 1995 — a few months before OPT-NC subsidiary, Offratel (with commercial brand L@goon), launched — by Nicolas Salvador and Alain Cocconi with involvement from the CIPAC Group.

Micro Logic Solutions (MLS) was the next ISP to launch in 1997, and it wasn’t until the 2000s that New Caledonia’s most recent ISPs, Telenet and Nautile, started operating; the latter growing the most of the five in the past 10 years. 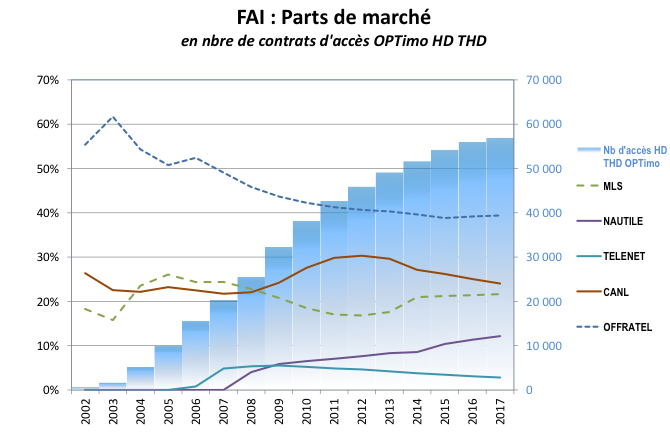 Although competition has somewhat impacted OPT-NC’s market share, it has not deterred it from investing in developing the national network. Over the past 11 years, New Caledonia has gone from an ADSL/256kbps, GPRS low speed network with satellite connectivity to the outside world, to a high-speed Internet economy, thanks largely to the launch of a submarine cable, deployment of 3G and 4G, and ongoing national broadband network that will replace all copper for fibre over the next six to eight years.

“Multi-device attachments are becoming ubiquitous with 2.5 devices per person in the under-25 age group in Nouméa. It is the same for video on demand since the arrival of services like Netflix in 2016, whose cache OPT-NC hosts.”

“The 4G and FTTH services we are rolling out will enable download speeds of 16Mbps and 100Mbps respectively, more than enough to meet the current and future bandwidth demand of end users.”

“Most importantly, though, is that it will connect everyone in New Caledonia, including those who have been isolated from the benefits of digital communication.”