Established in 2014, the Award recognizes ICANN participants who are committed to solving community problems with a consensus-based approach, acknowledging the importance of ICANN’s multistakeholder model of Internet governance, and who have made a substantial contribution to the higher interests of ICANN and the ICANN community.

Hiro, who is Director of Corporate Planning at Japan Registry Service, the ccTLD registry of .jp, has been involved in ICANN for almost 20 years, during which time he has been a great proponent of the multistakeholder process. We caught up with Hiro recently to ask about his work that contributed to the award, and what it means to be recognized for his achievements.

First, congratulations on the award, Hiro, it is truly well deserved.

Hiro: It was an absolute honour to be recognized alongside Patricio, who is also a ccTLD manager (of .cl). It’s also humbling to be joining the list of past awardees who include Avri Doria (2014), Cheryl Langdon-Orr and Nii Quaynor (2015), and Chuck Gomes and Keith Davidson (2016).

By definition, the Ethos Award is given to people who coordinate and build consensus with various stakeholders. It means the recipients cannot be awarded without colleagues who are cooperative in building consensus despite different backgrounds and beliefs. I strongly feel that I couldn’t be awarded unless I had been able to work with such brilliant people, so this is really an award for everyone I work with too. 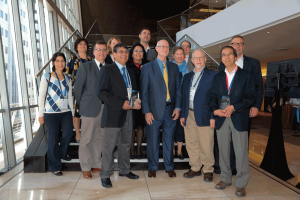 Hiro Hotta (front, right) and Patricio Poblete (front, centre) with their awards and ICANN staff and Board members following the award ceremony at ICANN 59. Image courtesy of ICANN.

You’ve attended every ICANN meeting since ICANN 2 in 1999. Can you tell us about the work you have been doing in the Internet community that contributed to this award?

Hiro: I remember at my first ICANN meeting being elected as a Councillor of the Domain Name Supporting Organization (DNSO) because I was the only member from the Asia Pacific in the Internet Service Providers and Connectivity Providers (ISPCP) Constituency at the time.

My first action as a DNSO Councillor was to develop the internal rules of the ISPCP Constituency, a project I collaborated on with two Councillors from Europe and the Latin American and Caribbean region. This was my first experience working with people in these regions and this project helped us all to understanding one another’s cultural and regional considerations when it came to domain names, and ultimately set me on the path of appreciating the multistakeholder process.

In 2001, when I moved from NTT to JPRS, my area of interest changed to Internationalized Domain Names (IDNs) and as such I joined a lot of committees and working groups under the ICANN Board, including the ccNSO Group, which I helped launch, and then served on its first Council in 2004. I have been involved in it ever since.

Additionally, I have also been involved in the Root Server System Advisory Committee (RSSAC) — since my company, JPRS, operates a Root DNS server — where I’ve enjoyed interacting with other members from very diverse backgrounds and cultures in the pursuit of security, stability, and resiliency of the Root DNS service.

You’ve been very active outside of ICANN as well. Can you tell us a little about that work?

Hiro: All those years ago, when I started attending ICANN meetings, I was Chair of the Asia Pacific Internet Association (APIA) Board which got me involved in AP* Retreats, through which I have met a lot of active colleagues from the Internet community in the Asia Pacific region.

Over the years, I’ve also enjoyed working with community members of APTLD and was its Board Member from 2013 to 2015.

What does the multistakeholder process mean for you?

Hiro: From my experience, the “multisitakeholder process” does not mean “making a product by compromise”. We all enjoy our own ways and also respect the ways of others to a greater or lesser extent in crafting a better practice against new issues stemming from development and the deployment of the Internet. As such, we all deserve the Ethos Award.