For many of Sri Lanka’s first Internet users in the late ’80s, including Gihan Dias (who at the time was a PhD student at the University of California), email was the first experience they had with the global networking tool.

“The Internet wasn’t active in Sri Lanka yet. At the time, a lot of Sri Lankan academics, like myself, studied and worked abroad, so they were exposed to the technology in their host institutes,” remembers Gihan, now a Professor of Computer Science at the University of Moratuwa, one of the leading technology institutes in Sri Lanka.

“A group of us who were working at universities in the USA (the Lanka Academic Network or LAcNet as they’re commonly referred to) thought wouldn’t it be great to start using email to allow expats to communicate with each other. So we set up a mailing list ‘Sri Lanka Net‘ (SLNet).”

SLNet was and still remains a very active mailing list and, like other educational-flavoured lists, allowed many of Sri Lanka’s academics to gain a fundamental understanding and appreciation of the Internet.

Not wanting to deprive their peers back home, Gihan remembers how those responsible for SLNet sought to introduce email to Sri Lanka.

With funding and support from the University Grants Commission of Sri Lanka and the Computer and Information Technology Council of Sri Lanka (CINTEC), LAcNet set up and managed a connection using UUCP protocol over dial-up telephone lines between the University of Moratuwa and Stanford University.

“Setting up that was fun even though we didn’t know exactly what we were doing. None of us had really set something up like that before so we had to read the manuals and figure out how to put it together and configure it. Today, if you don’t know something you Google the answer or find a YouTube video on how to do it. Unfortunately, we didn’t have the web then, so it was a lot of trial and error,” he says.

Set-up aside, Gihan says that a major challenge at the time was the cost associated with using the network — about USD 1 a minute — which limited transmission of emails to once-a-day. But it was from this challenge that the Lanka Experimental Academic and Research Network (now Lanka Education and Research Network or LEARN for short) was born.

First established in April 1990, LEARN was designed before the commercial Internet to cater to the information and communication needs of the academic and research community. Its aim was ‘to adopt a national strategy which can facilitate the essential free flow of information to sustain a high rate of research and development growth’. 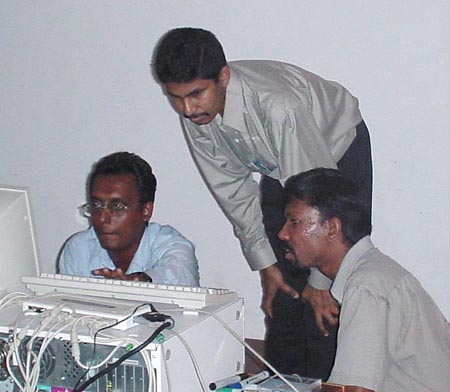 It started by offering an email service called LEARNmail, which was Sri Lanka’s first Internet mail system. With funding, the service improved and users were able to transmit and receive emails 2-3 times a day.

“Funding for this didn’t come easily. We were asking for money to do something that no one had done before or even heard of, particularly senior people in government and universities. Many funders couldn’t see the worth in something that the telephone and mail service was already providing at a fraction of the cost.”

LEARN still has an important role for future development

Over the last 20 years, LEARN has provided a high-speed connection to its members, which now includes NGOs and a number of other education and research institutions. At present, it has a 7Gbps bandwidth to the commodity Internet and a 1Gbps link to the academic/research Internet.

Upon reflection, Gihan says physically the network was a success in terms of its ability to provide reliable high-speed service. However, the potential of the network, in terms of it allowing members to share information, was not met until recently.

“Right now we have around 50 members who are a part of the network. As bandwidth has become faster, video conferencing and elearning have become more reliable and more popular, which allows staff to give classes across universities and campuses. It also allows institutions with supercomputers to share big data with others in-country and abroad,” he says.

Gihan says services like these are really important in relation to LEARN’s aim to facilitate the free flow of information to sustain a high rate of research and development growth in Sri Lanka, and ultimately, economic success for the country.

“We need to use more immersive technologies like virtual reality and elearning to give students a better education and help retain them in Sri Lanka instead of them emigrating overseas for education and jobs. Obviously, face-to-face interaction is still important but I believe these new virtual tools, coupled with use of more and more big data, are a part of the future of learning and business as email was for us in the beginning.”