Along with the other RIRs and technical community organizations, APNIC was represented by four staff and the chair of the EC, Akinori Maemura.

This team was kept very busy during the week, and to illustrate, here are 10 highlights from the event:

The 10th IGF was an achievement in itself, showing how much the forum has evolved, grown and strengthened over the past 10 years. As the last IGF in the current cycle, it was important to have a popular and successful event. With more than 2,400 people from around 120 countries participating, as well as many more through remote participation, it is clear that the IGF is valued and will very likely continue.

The RIRs and others in the Internet technical community support the continuance of the IGF as an important way to ensure that the RIR system, and other technical aspects of the Internet, can be better understood by others. It is a place where we can also understand the concerns and positions of other stakeholders, and help to see those concerns addressed in the best way possible.

The IGF itself is a product of the World Summit on Information Society (WSIS), 10 years ago. In traditional UN style, a 10-year review of the WSIS – dubbed the WSIS+10 process – is now being held, and several sessions were dedicated to this process in João Pessoa.

A general consultation session was held, with a large audience, and with the UN co-facilitators for this process (from Latvia and UAE). Participants expressed their views about the current Draft Outcome Document, and all gave strong support to the multistakeholder model (as opposed to a multilateral model suggested by the Draft) and to the extension of the IGF itself. It would be very surprising for the co-facilitators not to take the very strong inputs from this session to the UN in New York.

The NRO provided support for this session, which was designed to document and discuss the current “Best Practices” for IPv6 adoption from technical, business and policy perspectives. A public outcome document was presented during the IGF and will be finalized in December; we hope that this will be a valuable contribution in promoting the continued deployment of IPv6 globally.

This Open Forum, supported by the NRO, included members of the Numbering Community who gave their perspectives on the regional policy process, showing how it relates to the bigger Internet Governance environment. Panellists, including government representatives, discussed: how the number community has developed policies for the management and distribution of IP resources; how it has led the deployment of technologies that use such resources, i.e. IPv6; and how community-based efforts have produced a proposal for the transition of the stewardship of the IANA numbers function.

The IGF is a large international event and always gives a great opportunity for APNIC to meet with many different stakeholders in our work. In João Pessoa we met with: government representatives of India, Afghanistan, Singapore, Australia and Bangladesh; academic and non-government organizations from Sri Lanka, Bangladesh, and India; also several journalists and many other interested parties.

We also took the chance to attend coordination meetings held with the “I*” organizations (ISOC, IETF, ICANN, W3C, regional ccTLD groups, and RIRs), and among the NRO itself. An important topic of these meetings was the IANA stewardship transition, and in particular a number of issues that are still under discussion including: the CCWG proposal for improved ICANN accountability; revision of the ICANN Mission; and implementation of the IPR provisions of the transition plan.

This was the first time that there was an open microphone at the end of the IGF. It was very successful and inspiring, with voices from the youth program and also others from civil society groups, etc. It was clear that more time will be needed for this open mic in the next IGF.

More formally, at the closing ceremony, representatives from each stakeholder group, made final comments about the week. The representative from the technical community was Izumi Okutani, who talked about the value of the IGF throughout the years and the need to preserve its archives in a way that they are easily accessible to all.

This was a workshop that discussed the evolution of the IGF in the years to come. Paul Wilson said that the community can continue to develop the IGF “not as the single global event, but as a whole system, a loose system, an ecosystem or even a movement as some people have described it.”

He emphasized the importance of the IGFs at local, national and regional levels, in addition to the UN organized global event. It is in these events where the aggregation of voices can happen, with people speaking in a local language and in formats according to local culture.

Also great innovations are happening within different IGF formats and outputs, for example, the Asia Pacific Regional IGF took the brave and bold step of producing a synthesis document at the last meeting. Another good example is the Friends of the IGF website, which is a fantastic resource allowing data mining and really powerful archiving options.

The year 2015 also marks the tenth anniversary of a multistakeholder experiment that helped bring the WSIS to a successful conclusion—the Working Group on Internet Governance (WGIG).

Convened by the UN SG in 2004, the WGIG assembled 40 representatives of governments and stakeholders to release a consensus report that proposed a ”broad definition” of Internet governance.

This session was based in an edited book to be released 1 December by the APC entitled, The Working Group on Internet Governance: 10th Anniversary Reflections in which Paul and I have written an article about Critical Internet Resources.

As in other IGFs, this time, the Seed Alliance recognized those projects in different regions supporting Internet development. Award winners from these projects had the opportunity to attend the IGF and to share their experiences and build a community. Vint Cerf played an active role during this ceremony, as well as the main donors of the Seed Alliance, from the IDRC. This ceremony marked the 10th anniversary of Frida, the program from Latin America; and also celebrated renewed funding commitments from IDRC and welcomed ISOC as a new donor. More information at seedalliance.net

Like we have in the past, APNIC and the other RIRs had a small booth at the IGF exhibition space, as a place to distribute information materials, meet IGF community members, and coordinate ourselves.

This year we made a special impact with a coffee machine and a barista serving the best coffee available at the IGF. During three days we served over 3,000 cups of coffee, a contribution which was especially appreciated! 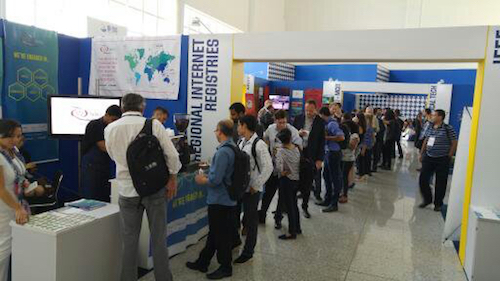 APNIC · 5 hours ago
@apnic
#QUIC relieves head-of-line blocking as it is stream-aware such that it knows which specific streams have been affected, writes @constsand: https://t.co/XyUR1jLN2p

@ike_kunze #HTTP3 https://t.co/DhIS1nMTtl
View on Twitter
5
14
APNIC · 11 hours ago
@apnic
Are most #DNS queries handled by a small set of operators in the recursive resolver space? And what about authoritative servers? Is the market for these services highly centralized? Answers here: https://t.co/DOTCxk343o https://t.co/Bs3BfZr9ej
View on Twitter
1
7
APNIC · 11 hours ago
@apnic
Does StarLink deploy Performance Enhancing Proxies (PEPs) or other types of middleboxes to mitigate the impact of increased latency on #TCP? Learn more here: https://t.co/9ftabAD5VU