The Port of Jakarta (Tanjung Priok) has long been Indonesia’s busiest seaport. The bustling harbour handles more than half of total goods shipped into and out of Indonesia, and is considered to be a barometer of Indonesia’s economy.

Fifteen kilometres west of Tanjung Priok is the more exclusive Pantai Mutiara Marina. Here you’re more likely to see yachts and luxury speedboats rather than massive cargo ships or oil tankers. However, the glitzy port has a strong claim to being far busier than its larger sister.

Pantai Mutiara is where one of Indonesia’s largest submarine fibre-optic cables docks, a cable that carries millions upon millions of data packs a day including phone calls, emails, Ebay purchases, and credit card transactions. 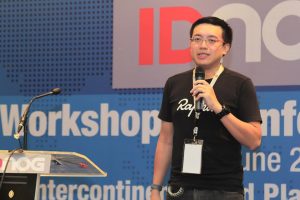 “Subsea fibre-optic cables are extremely important, as they allow for high-speed broadband connection to the rest of the world,” says Willy Sutrisno, a telecommunication specialist with Matrix, the company that owns this particular cable, which spans 1055 km to Singapore.

IDNOG (Indonesia Network Operators’ Group) is an independent, not for profit organization run by volunteers. It provides a forum for Internet network operators to discuss matters of mutual interest. Members of IDNOG include technical staff from ISPs, network operators, government regulators, decision makers, hardware and software vendors, and educators and trainers.

Although not as expansive as the submarine cable, Willy says IDNOG is no less important in terms of connecting Indonesia’s Internet network operators with the rest of the world. 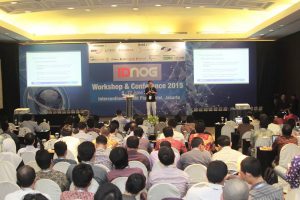 “Indonesia has some of the best minds and real world experience in the industry, however not many have the opportunity to travel to international events to give talks. This may be because of a lack of funding or because they are not confident giving public speaking in their non native language,” he says.

“We set up the NOG for two reasons. One, it helps to inform Indonesian network operators about the latest things that are happening in the industry, especially from overseas countries, and how we can achieve them. Secondly, our meetings provide local operators a space to share their opinion and practice presenting to an audience.”

Read more about the birth of IDNOG

Since it was established in 2014, IDNOG has held two conferences, where local network operators have shared the stage with international speakers.

“I look at Japanese network speakers at international conferences like APRICOT and many of them present and speak up at these events even though they may not have very good English.

“They have had a NOG (JANOG) since 1997, which I believe has had a large part to play in this confidence. What I notice is they have a very big passion to learn and to share information. On top of that, Japanese organizations/companies are always a good and loyal sponsor to such similar events.”

As IDNOG enters its second year, Willy says there are a lot of challenges they still need to face.

“Our greatest challenge is attracting more conference sponsorship from local ISPs and organizations,” he says. 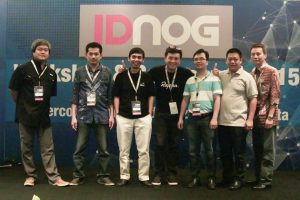 “For the first two conferences, more than half of our funding came from international sponsors – Google, ICANN, Global Transit, Biglobe/Fullroute and APNIC – who have dealt with other NOGs and understand their benefits.

“Local organizations don’t fully understand what we do and how we work because we are new. We need to show them that we are attracting people to our network that work with them and for them, therefore we provide a perfect opportunity to speak with and encourage this community.”

A second challenge IDNOG is facing is formalizing the organization.

“When set up IDNOG, we wanted to make things as simple as possible. Part of this was not registering it as an official organization in Indonesia, as this is a very complicated task in Indonesia.

“However, we have discovered that this makes it difficult for sponsors to transfer the sponsorship funds, as we don’t have an official bank account. As such the committee are currently discussing registering IDNOG as a not-for-profit organization.”

In the grand scheme of things, Willy sees these challenges as rather minor in comparison to getting IDNOG off the ground.

“That was the biggest challenge, one that was made possible largely by the cooperation and passion of the Program Committee who have been responsible for multiple things including getting sponsors, finding conference speakers and workshop tutors, and communicating with our members; who have in turn have helped us by being so active among the community.

“Now that we have established this great network we need to make sure it will survive and prosper so we can highlight and export the achievements of Indonesia’s network operators.”

APNIC · 3 hours ago
@apnic
"We used to claim that ‘the Internet’ was a common network, a common protocol, and a common address pool. That's just not the case these days," says Geoff Huston. Where's it all heading? https://t.co/VEgfa8KuJU https://t.co/rEWMg5bW0c
View on Twitter
0
4
APNIC · 4 hours ago
@apnic
#OARC39 CFP is open. The next @dnsoarc will be held over two-days hybrid meeting held over two days in October in Belgrade, Serbia, co-located with #RIPE85. The Program Committee is now seeking #DNS-related contributions from the community. Details: https://t.co/c0USdA2piZ https://t.co/V7c577PVTV
View on Twitter
DNS-OARC@dnsoarc
In case you missed it:

Our Call for Contributions/CFP for #OARC39 is open! ✨

#OARC38 #LoveDNS ^HS
0
0
APNIC · 8 hours ago
@apnic
[Listen🎧] New protocols like #QUIC may seem complex to begin with but with experience + support they are becoming the next generation of protocol the Internet needs says @programmingart
https://t.co/6700W6r3bx https://t.co/l5r9F3cm65
View on Twitter
2
12