Recently, we wrote about how mobile devices will play an increasingly important part in connecting more and more people to the Internet in the Asia Pacific region.

This growing trend means it is increasingly important to build awareness among the mobile community about the need to deploy IPv6 on their networks, and in mobile devices and applications.

In a step towards connecting with the mobile community of our region, I accompanied APNIC Director General Paul Wilson last week to GSMA’s Mobile World Congress held in Shanghai, China.

This was the second time APNIC has attended a GSMA event, the first being the Mobile World Congress, held in Barcelona in March this year.

The three-day conference is the biggest mobile event in Asia, with a conference program and an exhibition spread across five halls and with over 20,000 people attending. During the conference we met with representatives from two of our key mobile operating Members in the region – SmarTone, based in Hong Kong, and China Mobile – as well as the director of GSMA.

Meeting with our Members and talking with other mobile opperators deepened our understanding of what they think about IPv6 and their motivations surrounding IPv6 deployement. 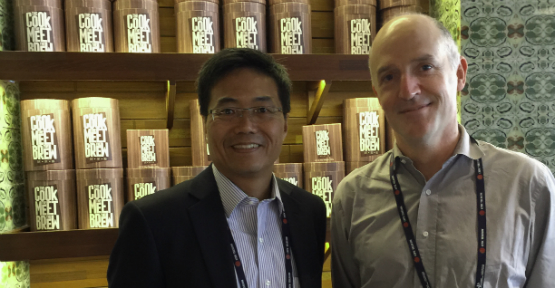 It was good to hear the SmarTone general manager say IPv6 was the only way to go for them. The story was different with China Mobile who are waiting for a business case to support a decision to upgrade their system to IPv6 – a common reason that many network operators have expressed since IPv6 was launched.

Paul also gave a keynote talk during the ‘Internet of Things Summit’, highlighting IPv4 exhaustion and the need for mobile operators to deploy IPv6 to accommodate the increasing number of mobile Internet devices that will connect in the future.

During his presentation, Paul provided a brief digest of how IPv4 exhaustion has come about, and how adopting IPv6 can help ISPs and telcos scale their networks as well as addressing quality, speed and networking issues associated with NATs and address sharing.

He also warned of the inevitable spread of double-NAT connectivity via IPv4-only service providers, as LTE becomes the “last mile” to home and office networks serving many millions of users and devices.

GSMA (Groupe Speciale Mobile Association) shares a lot of similarities with APNIC. It is a not-for-profit organization devoted to supporting its members.

The GSMA represents the interests of mobile operators worldwide, uniting nearly 800 operators with more than 250 companies in the broader mobile ecosystem, including handset and device makers, software companies, equipment providers and Internet companies, as well as organizations in adjacent industry sectors. 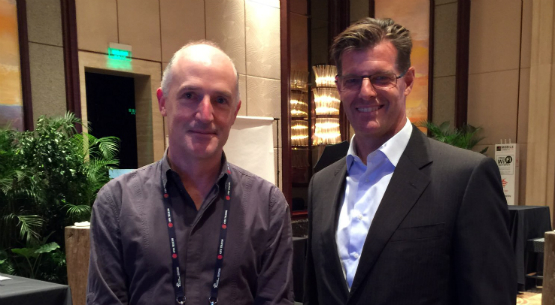 Paul and the head of GSMA Asia Alasdair Grant.

Paul and I met with Alasdair Grant, the Head of Asia for GSMA, who explained the evolution of the World Mobile Congress Shanghai event and his team’s role in the region.

Going forward, we discussed collaboration around building awareness of IPv6 best practices at the Congress and through GSMA’s member channels, as well as the possibility of collaborating on training workshops.

There was a lot of discussion at the Congress surrounding 5G.

During the ‘Road to 5G’ session, one operator stated that their “mission is to provide a billion people with the wealth of millionaires” – in relation to the information and services that millionaires can access via the mobile Internet. 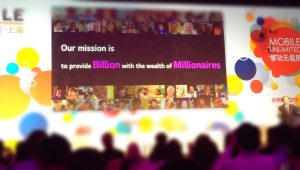 This reflects what was said in the Global Internet Report; that connectivity is only one part of the puzzle; that connection to the Internet can potentially provide more services, like health and education to communities.

However, services 5G seeks to deliver cannot be realized without a more sustainable, scalable network that can accommodate future Internet growth.

If we can continue to build awareness, and operators can see the value for investment to upgrade systems, then IPv6 deployment in the Asia Pacific region will move forward in leaps and bounds in the very near future.

APNIC · 14 hours ago
@apnic
The Network Time Protocol has no security mechanisms. Michael Schneider shows us how to mitigate: https://t.co/K4K8E19pbZ