The Internet Society’s 2015 Global Internet Report this year focuses on the Mobile Internet, and with good reason: it’s a revolutionary step for the Internet.

One of the key challenges for IPv6 has been the number of factors in end-to-end adoption.

World IPv6 Launch had a target of 1 per cent of fixed line residential broadband customers on IPv6. That target figure was chosen because it meant the intersection of IPv6 capability in parts of the network all the way from desktop software to core routers.

If an organisation is able to cut through all those layers to get just 1 per cent of their customers IPv6-ready it would mean the technical problems would be solved, and it would be just a matter of scaling the solutions out to all equipment. The IPv6 growth chart for AS 7922 (COMCAST US) shows this happening: 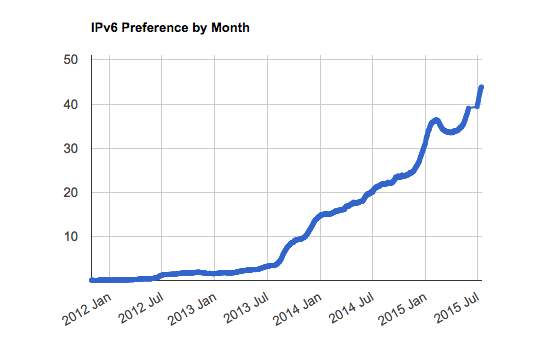 Comcast has an impressive 43 per cent IPv6 capability on their cable network, starting from their 1 per cent achievement on World IPv6 Launch day in 2012. This story is repeated around the world, as you can see from the APNIC Labs measurement charts of IPv6 growth.

But something even more interesting has happened for mobile networks. In recent years, mobile network IPv6 capability for several large providers has gone from low figures to very high figures.

Sticking with the US, major telcos feature heavily in the list of IPv6 ready networks:

One possible answer to this question lies in the Internet Society’s global report: massive growth and rapid technological change have combined in the mobile internet sector to both reduce the challenge of dealing with old and incompatible technologies, and to increase the commercial advantages of having an IPv6 network.

Smartphones and mobile devices have two key advantages over desktop devices that make them ideal for IPv6 networks.

The first is that mobile devices are upgraded frequently and easily. New versions of mobile devices come out with regularity, and mobile plans tend to encourage upgrades yearly or on a two-yearly cycle.

While Windows XP (released in 2001) still enjoys around 16 per cent market share, iOS version 5 (released in 2011) is barely even above sample error at 1.4 per cent. This upgrade early, upgrade often approach means changes to smartphone technology and software rapidly spread to the user base.

The second key advantage of mobile is that the infrastructure technology is also more modern. There has been a new generation of wireless mobile network every decade for the past four decades, and each new generation requires new cell towers and equipment, and multi-year rollout strategies. This means the mobile Internet’s infrastructure is also less likely to be running on very old IPv4-only hardware than its fixed line counterpart.

We can gauge a sense of how critical IPv6 is to the mobile Internet from actions such as Apple’s announcement that the iOS 9 App Store approval process will include a requirement that IPv6 is supported for all apps. If the current trend of replacement rates continues, this means all Apple-based mobile users will be fully IPv6 ready at the edge within two or three years.

Unlike other networks, their starting point was 100 per cent IPv6 capability, during their early trials, with a decline and subsequent rise back to their current level of 81 per cent.

Google Fiber enjoys many of the same benefits that mobile Internet does: all new CPE devices, and all new infrastructure equipment. The 20 per cent gap remaining to full IPv6 capability is speculatively the impact of older desktop computers and software, which can still operate on a fixed broadband network.

It’s clear by the measurements we see, the actions of users as detailed in the Internet Society’s report, and the actions of cellular network operators, that IPv6 has found its home on the mobile internet, and the world is enjoying the benefits of the end-to-end connectivity, which has transformed our societies in such a remarkable way, on the go, all the time.