Since the start of 2015, planning for the IANA Stewardship Transition has accelerated steadily. Planning activities have been underway across the Internet community, and public interest in this process has increased. I’m providing this update to the APNIC community after a series of events in Singapore during the recent ICANN 52 meeting. For background, please see my previous blogpost, from August 2014.

The year so far

The first important milestone of 2015 was 15 January, the target deadline for submission of community proposals to the IANA Stewardship Transition Coordination Group (ICG). Two proposals were submitted by that date, from the numbers and protocols communities, while the third proposal (from the names community) is taking longer to come to a conclusion.

The numbers proposal was the product of several months of work by the RIR communities, and several weeks of intensive work by the CRISP team, to assemble the final submission. The CRISP team started work in December and worked intensively, through email and 13 teleconferences, in order to meet the 15 January target. We all owe a huge debt of gratitude to the CRISP team for this intensive effort – in the middle of a holiday season – and for the successful result they achieved. 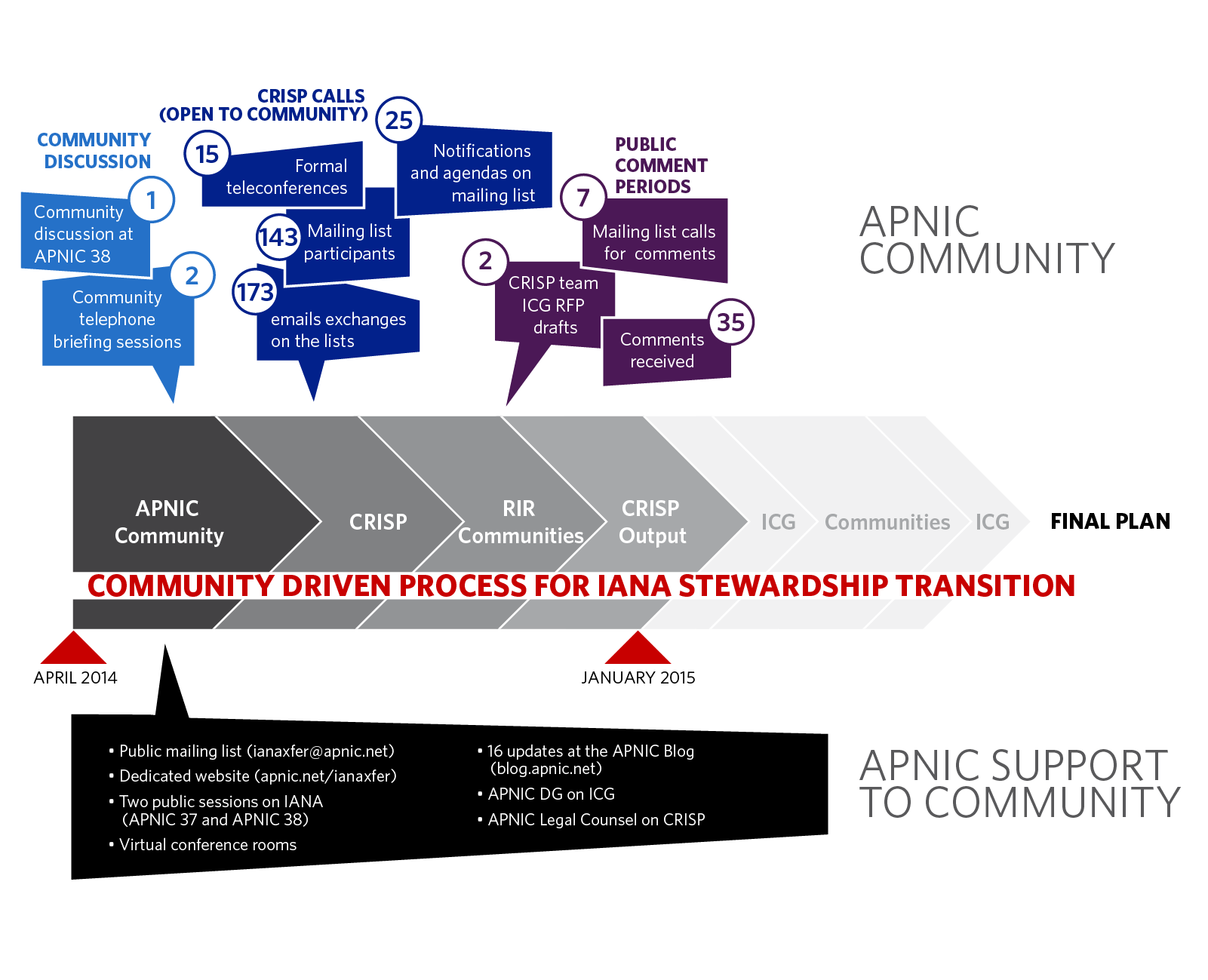 After the ICG received the two proposals, it conducted initial assessments which were reviewed at the face-face meeting in Singapore on 6 and 7 February. One task of the ICG is to identify any intersections or possible conflicts between the proposals, and in the case of the protocols and numbers proposals, one case was found – in the treatment of IANA-related intellectual property. The ICG has therefore asked the communities for clarifications regarding their proposed treatment of the IANA trademark and iana.org domain name, and will try to find an approach which is satisfactory to both.

What about the Names?

It’s not surprising that the names community will take longer to produce a transition plan, due to the number and variety of naming-related issues arising from the IANA transition. Structurally, there is a less defined separation between names-related policy-making and implementation within ICANN, and a greater concern therefore about the accountability of ICANN processes. These concerns do not exist so much for numbers and protocols, because of the location of their policy-making activities outside of the ICANN structure (within the ASO/RIR and IETF communities respectively).

The Cross-Community Working Group (CWG) on Naming, which is responsible for the names community proposal, has advised the ICG that its proposal will be available by June 2015, and this will clearly make the original ICG timetable more difficult to achieve. However, the ICG still hopes that with tight coordination over coming months, it may still be possible to submit a final proposal to the NTIA during July, in time for the transition to occur as initially planned in September 2015.

What about the future?

In the event the ICG’s final transition proposal is not submitted or accepted in time to meet the September target, the NTIA has confirmed that the current IANA contract can be extended. It is important to understand that an extension will still allow the transition to take place at any later time, whether the timeline is extended by one month or six. So if the Internet community can maintain its commitment and its work towards the transition, I hope we can expect a positive result and certainly within 12 months of the original transition target date.

What next for Numbers?

The CRISP team proposal appears to have fulfilled the ICG’s requirements; however there is more work to be done. The proposal includes a so-called Service Level Agreement (SLA) between the RIRs and ICANN, for the ongoing provision of IANA services. This agreement now needs to be developed, by the RIRs in negotiation with ICANN, and according to the CRISP proposal’s stated principles. While this work goes on, CRISP will continue to inform the community and gather input to ensure the process stays on track and remains consistent with the community’s wishes.

Under the CRISP proposal, the new SLA will not represent substantial changes from the current established processes for Internet number management. Rather, it will restate and formalise the current arrangements, according to a clear and agreed set of principles. The result will be a set of clearer and more accountable arrangements, including formal review, escalation processes and oversight mechanisms, which will ensure the stable continuity of existing services.

For the APNIC community, the next opportunity to review this process is coming soon, at APRICOT 2015 in Fukuoka. One Monday 2 March, at 4pm JST, there will be a consultation session to review the progress so far, and to discuss the elements of the SLA which is to be developed. Again, the results of our meeting will provide important inputs to similar discussions as they continue around the other RIR regions in coming months. I hope you can join this session either in-person or remotely via the webcast.

Personally, I am hopeful that with continued attention from the Asia Pacific and other regional communities, we will be able to finalise our new arrangements with ICANN within the next few months. As a community we can be ready for the transition to take place in September; or at any time after that, in case the NTIA’s transition timeline does need to be extended.

The only concern is that in case of longer deliberations within the names community – or an inability by the ICG to produce a single consistent plan encompassing all elements of all community proposals – we might see further extensions and possibly even a change of attitude by the US Government towards the transition.

After more than 15 years of waiting, it would be a great disappointment to miss this opportunity for the IANA stewardship transition, which is why we will need to assess the situation continually in coming months, and respond to any changes as they happen.  I am confident the multistakeholder Internet community will successfully meet the challenge.

Finally I would like to repeat my thanks to the CRISP team, especially to the APNIC members of the team, Izumi Okutani, Dr Govind and Craig Ng; and also to all members of the APNIC community who have contributed to this process so far.

Exactly 49 years ago, Vint Cerf and Bob Kahn submitted a paper to IEEE Transactions on Communications describing a protocol for sending packets across networks. https://t.co/1KnAl9dV1r
8
12
APNIC · 1 day ago
@apnic
George Michaelson on the 49th anniversary of documenting TCP/IP: https://t.co/qSAfC8xvRt