This is the fifth post in our series, investigating how number resource policies changed the development and growth of Internet infrastructure in the APNIC region.

Policies that have sought to overcome IPv4 exhaustion get a lot of airtime, however another Internet resource — Autonomous System Numbers (ASNs) — exhausted its first iteration not so long ago, and the transition to the newer ASNs has been low key and close to seamless.

ASNs are used by network operators to uniquely identify an independent IP network that has its own routing policies. Initially, they were defined as a 16-bit (2-byte) number. But as the Internet — and the number of independent networks, each of which needs a globally unique ASN — grew, it became obvious by the mid 2000s that the 65,536 possible numbers (1,026 of which are reserved for local, private or special use) would not be enough. 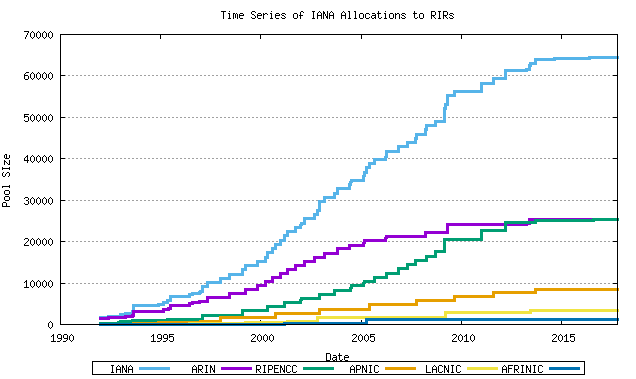 Figure 1 — Cumulative IANA AS block allocations to RIRs (allocation unit is in blocks of 1,024 ASNs).

Enter APNIC’s Chief Scientist Geoff Huston, who was among a group of researchers to bring to light the impeding exhaustion, and, with the help of Philip Smith, developed a proposal for APNIC and other RIRs that provided a roadmap for an orderly transition to the use of 4-byte ASN space.

Yakov Rekhter was the first to highlight that we were going to run out of 2-byte ASNs. Having been involved in BGP from the start he could see the growing use of ASNs in inter-domain routing would have the inevitable result of exhausting the ASN number pool.

The ASN has two essential functions in BGP:

Yakov’s concerns were taken up by Kim Claffey at the Center for Applied Internet Data Analysis (CAIDA) in 2003, who encouraged Geoff to perform a detailed analysis of the rate of consumption of 2-byte ASNs and generate some predictions of the timing of ASN number pool exhaustion.

“It was a collaborative effort between several of us who had been following the situation closely for a few years,” remembers Geoff.

“Understanding when we were going to run out would help us to work backwards on a transition plan to forestall exhaustion.”

Having showed that the available pool of 2-byte ASNs would run out between 2009-2011 (see presentation above), the group began the task at hand, which included:

The result was the development and implementation of protocol standards (RFC 4893) and policies for 32-bit (4-byte) ASNs.

The whole process took a little over seven years and, for Geoff, its success was largely due to the shared desire for a routable Internet.

“It actually went surprisingly well because everyone involved had to work together towards a solution that would allow for the Internet to grow.”

“There wasn’t a task force or committee. It was a case where everyone who needed to be involved (vendors, network engineers, RIRs and the IETF) had a horse in the race; they would all be affected if there was no suitable replacement for 2-byte ASNs.

Other reasons for the success included the backward compatibility of the transition (allowing 4-byte ASNs to be carried across 2-byte ASN routing sub-domains) as well as all five Regional Internet Registries implementing global assignment policies — first proposed by Geoff and Philip Smith on the APNIC mailing list as prop-032: 4-byte AS number — that were rolled out over four years:

RIRs will process applications that specifically request 2-byte only ASNs and assign such ASNs as requested by the applicant. In the absence of any specific request for a 4-byte only ASN, a 2-byte only ASN will be assigned.

RIRs will process applications that specifically request 2-byte only ASNs and assign such ASNs as requested by the applicant. In the absence of any specific request for a 2-byte only ASN, a 4-byte only ASN will be assigned.

“The essential attribute of the proposal was to facilitate the ease of transitional arrangements by equipment vendors, network managers and network operations staff, to provide the industry with some predictability in terms of dates and associated actions with respect to registry operational procedures for ASN allocations,” says Geoff.

At the most basic level, the successful transition to 4-byte ASNs supported the continued growth of the global Internet by allowing an exponential increase in the number of independent IP networks.

As of November 2018, the 2-byte ASN pool in IANA is almost exhausted, with less than 400 (79 unallocated and 300 reclaimed) remaining in the APNIC region. As per prop-032, on 1 Jan 2010, APNIC, like all other RIRs, ceased to make any distinction between 2-byte and 4-byte when assigning ASNs, thus the reason for these remaining ASNs.

As to be expected, there has been a continual rise in the number of 4-byte ASNs allocated in the APNIC region (Figure 2 and 3 ) and encouragingly an increase in those advertised (Figure 4). 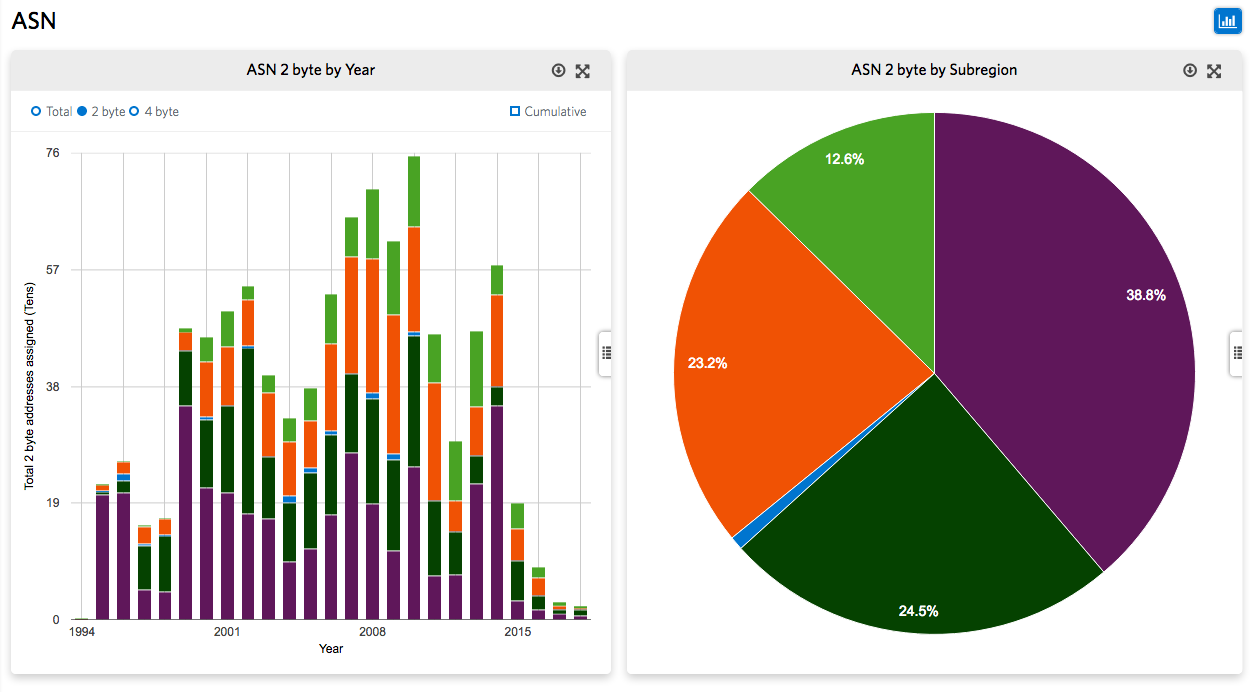 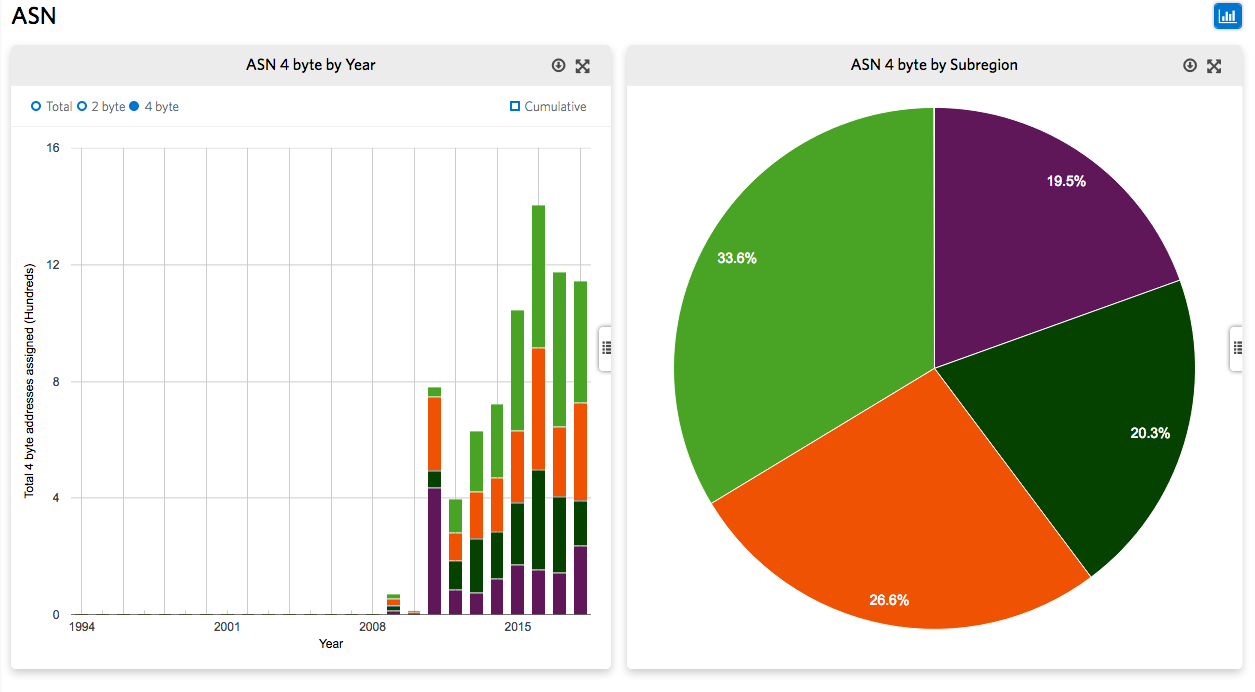 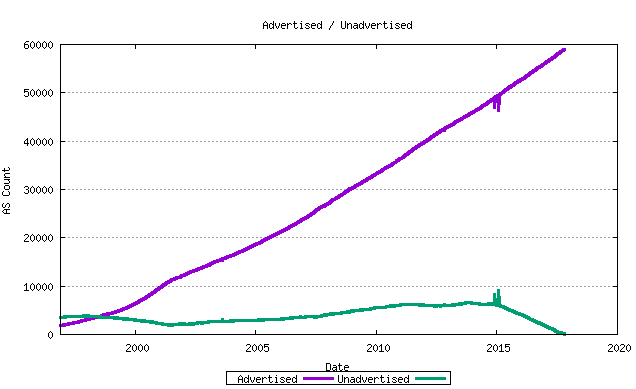 Hundreds of 4-byte ASNs are in active operation in Australia, India and Indonesia (Figure 5), and although some economies may have yet to deploy them, there is enough experience in the region now to learn from.

Most importantly, APNIC Hostmasters are reporting less and less networks unable to accept 4-byte ASN delegations, an indication that the industry has taken it upon itself to gradually incorporate 4-byte ASNs as the policy intended.