Proposed by Anne Lord (pictured) and Randy Bush in 2003, prop-001 — the Policy Development Process or PDP for short — formalized the principles and process of policy making in the APNIC region.

On first review, prop-001 is a rather humble procedural document.

But dig a little deeper into APNIC’s first formal policy and you’ll see a process that continues to have significant impact on the development and growth of Internet infrastructure in the Asia Pacific, empowers the APNIC community across 56 economies, and has legitimacy at a global level.

Proposed by Anne Lord and Randy Bush in 2003, prop-001 — the Policy Development Process or PDP for short — not only formalized long-held principles of policy making that had been in place since the early days of APNIC — and used around the world in other forums like the IETF — but also the process of policy making, which had previously been much less clear.

“The principles of policy making at APNIC were core to the way APNIC operated from the very beginning. Community consultation where anyone could participate, consensus decision making, and transparency were — and still are — core principles at the heart of the RIR system around the world today,” remembers Anne, who in 1998, was working as the Manager of Member Services at APNIC.

But while the principles were strong, the policy making process back then was largely undocumented. Anne recalls, “while ‘older’ community members were aware of informal guidelines built around the principles, many of our newer Members weren’t and so could easily be excluded from the policy process”; a point that was of particular concern given the considerable growth in APNIC membership (Figure 1).

“Moreover there was no consistent understanding of the elements of the process, timelines and how consensus decisions were ratified,” says Anne. 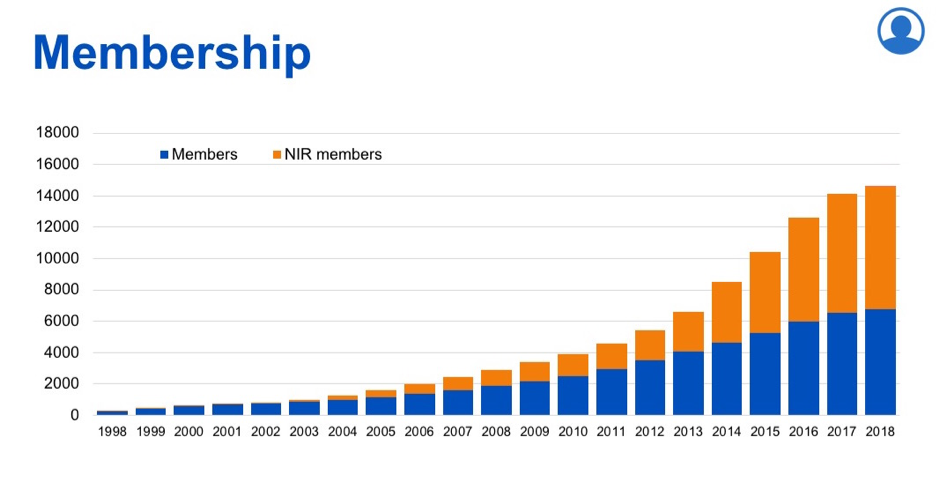 The first real review of the policy making process itself was initiated in Brisbane, Australia, at APNIC 10 in October 2000.

“As Member Services Manager, I started to see all these new Members, the new industries they were coming from, and technologies — such as cable and mobile — that needed IP addresses. And so, I started this review in 2000 to collect feedback from the community on how we could improve the policy process and make it more inclusive,” says Anne.

At APNIC 15 in Taipei, Taiwan, in February 2003, Anne made a proposal at the Address Policy Special Interest Group (SIG) for a revised Policy Development Process.

“Randy provided very valuable feedback on the policy development proposal made in Taipei. He felt that the current process not only lacked formality and clarity — which is so important in such a culturally diverse region where English is not the first language of most Members — but also that there was not enough time for the community to consider the policies and the potential impact it may have on them.”

Other issues were also fundamental — how to balance the needs of a dynamic and expanding industry while at the same time ensuring that the process provided adequate time for consultation.

“No one wanted to create ‘bad policy’, or to create a process that was terribly slow,” says Anne.

“How to judge consensus, on what medium, and what was the role of the members meeting and the EC were also important elements of the process to discuss and to agree on.”

Having discussed the previous PDP’s shortcomings and potential improvements with several community groups, Anne and Randy submitted the proposal to revise the APNIC policy process to the Policy SIG mailing list in June 2003, two months prior to discussing it at the Open Policy Meeting at APNIC 16 in Seoul, South Korea.

As a quirk, the process through which they sought to discuss prop-001 was the process which the policy itself was describing. In other words, the policy was the first to test whether the PDP would work.

Needless to say, it did. To the credit of those involved from the community, the APNIC PDP has stood the test of time with only two very minor changes in 2014 to decrease the comment period and some of the wording.

Anne says the fact that there have been no significant changes to the PDP since 2003 is a testament to its thoroughness and simplicity as well as the input that the community provided.

“It’s simple, it’s effective and it allows you to voice ‘your’ opinion to the community.”

Proposals to change APNIC policy are posted to the Policy SIG mailing list at least four weeks before the meeting at which they will be considered. This allows all interested community members to discuss the proposal and for people who cannot attend the meeting to have their say. This discussion period also gives the proposer an opportunity to refine the proposal based on community feedback.

Twice a year, at the APNIC Conference, the Policy SIG convenes an Open Policy Meeting (OPM). The proposed policy changes are presented and the community discusses the proposal in person, or via remote participation.

At the end of the time allotted to discuss the proposal, the SIG Chair(s) decide if the community has reached a consensus. If the SIG accepts the proposal, the Chair reports that decision at the APNIC Member Meeting (AMM). The APNIC membership is then asked to reach consensus on the proposal.

If the proposal reaches consensus among the SIG participants and among the APNIC Membership, the proposal is sent to the mailing list for a final comment period.

If any changes were made to the proposal during the OPM, the comment period gives the community the opportunity to comment on the modified proposal.

If the consensus is maintained during the comment period, the SIG Chair will ask the APNIC EC.

Anne’s tips for becoming involved in the policy process

“The APNIC policy process was developed to make it easy for anyone to share their opinion on what needs to be changed or improved to help you get Internet resources.

My suggestion if you have an idea for a policy, but aren’t sure how best to propose it, is to discuss it with others, whether it be colleagues or people in the community. You’ll find that the APNIC community is rather receptive and willing to provide feedback.

If there’s interest in the community, you might decide to propose a BoF (Bird of a Feather) session at an APNIC conference, which is a forum to discuss the idea. This will also help with finding co-authors, who can help with writing a policy proposal – I think it’s good to do it with somebody else who shares your opinion. That said, you should always look for and listen to people who don’t agree with your policy idea and find out what their reasons are — this will help you to accommodate these concerns.

Remember, not every policy gets through. So, don’t be put off if you don’t succeed at first. Good policy takes time!”